Modica located in southeast Sicily is famous for its unique Sicilian Baroque architecture and locally produced chocolate.  Nestled in the Hyblean mountains, the town is divided into two distinctive parts: Modica Alta and Modica Bassa.  Discover The Best 10 Things To Do in Modica including major landmarks and architectural sights! 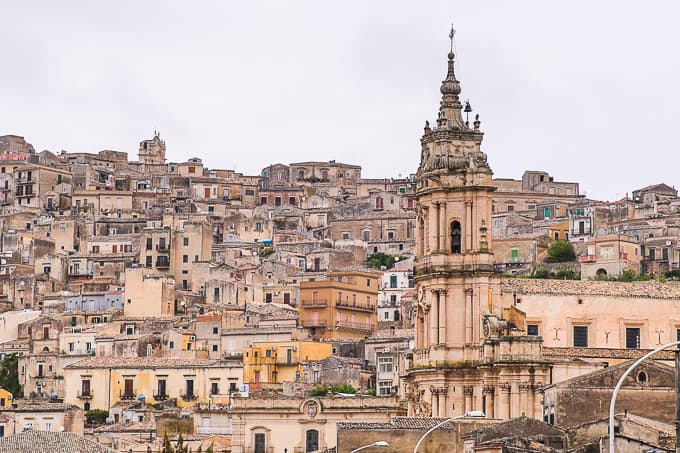 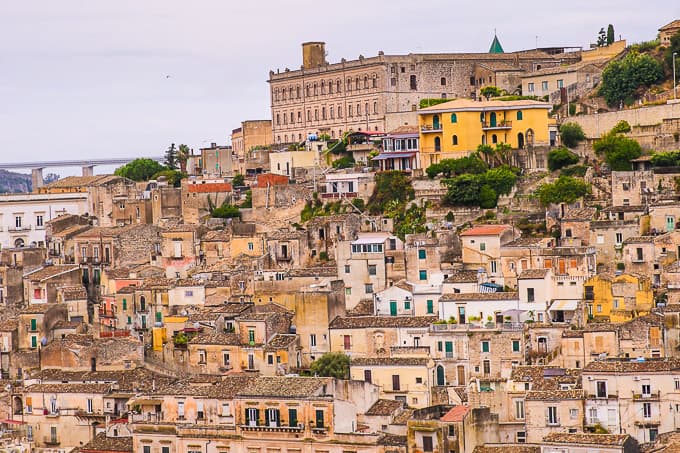 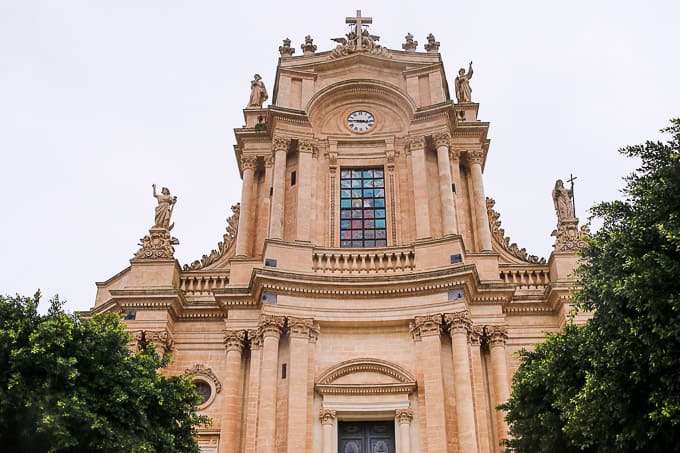 10 Best Things To Do in Modica

Modica is known for its spectacular views, impressive Baroque architecture, locally produced chocolate the Cioccolato di Modica, and steep staircases.   One could spend days exploring this historical town.  However, if you have only one day to visit Modica, below are the Top 10 Things To Do in Modica that you can accomplish in just one day. 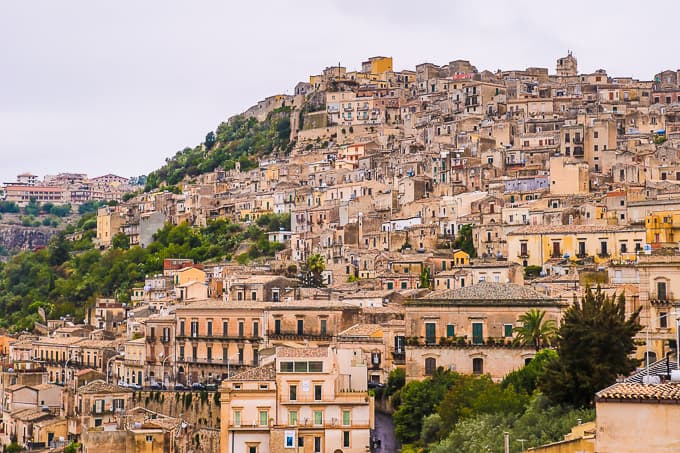 Cathedral of San Giorgio is a fine example of the Sicilian Baroque architecture.    From its strategic location, the Cathedral overlooks the whole town of Modica.  The church is known for its impressive staircase of over 250 steps.  The staircase connects Modica Alta and Modica Bassa and leads down to the lower town, Modica Bassa.  At the top of the stairs, you can enjoy a spectacular view of the city.

The interior of the church is filled with numerous works of art. 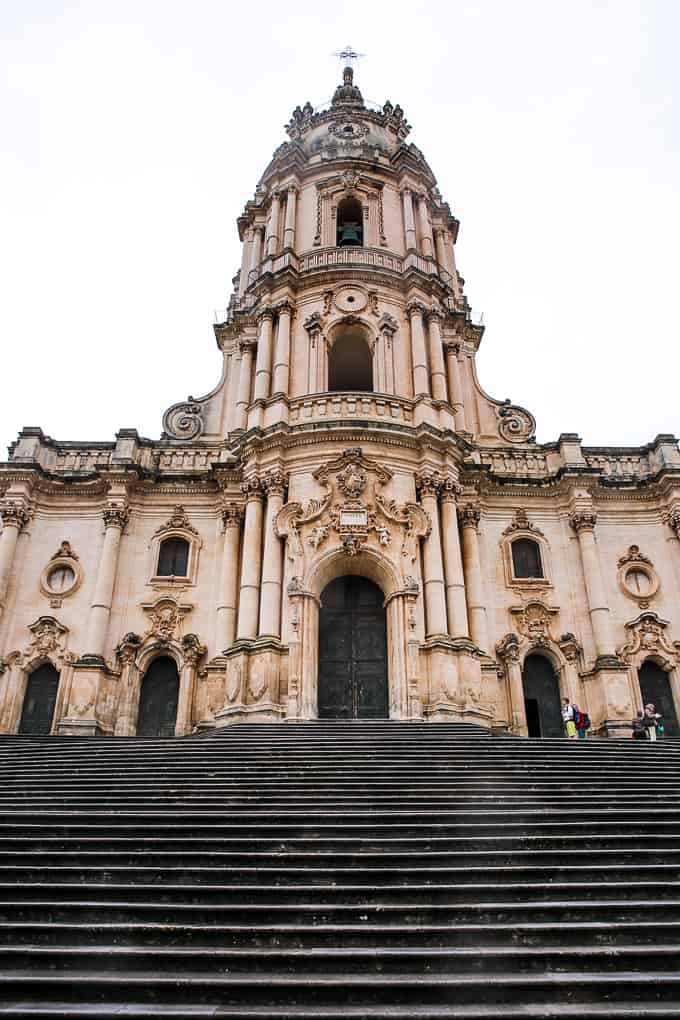 The church of San Giovanni Evangelista is located in the upper Modica Alta.  The church sits at the top of the monumental staircase lined with trees on both sides.

The church is just a short walk away from Pizzo Belvedere (located on Via Pizzo) - a scenic spot with spectacular views of Modica and the surrounding area. 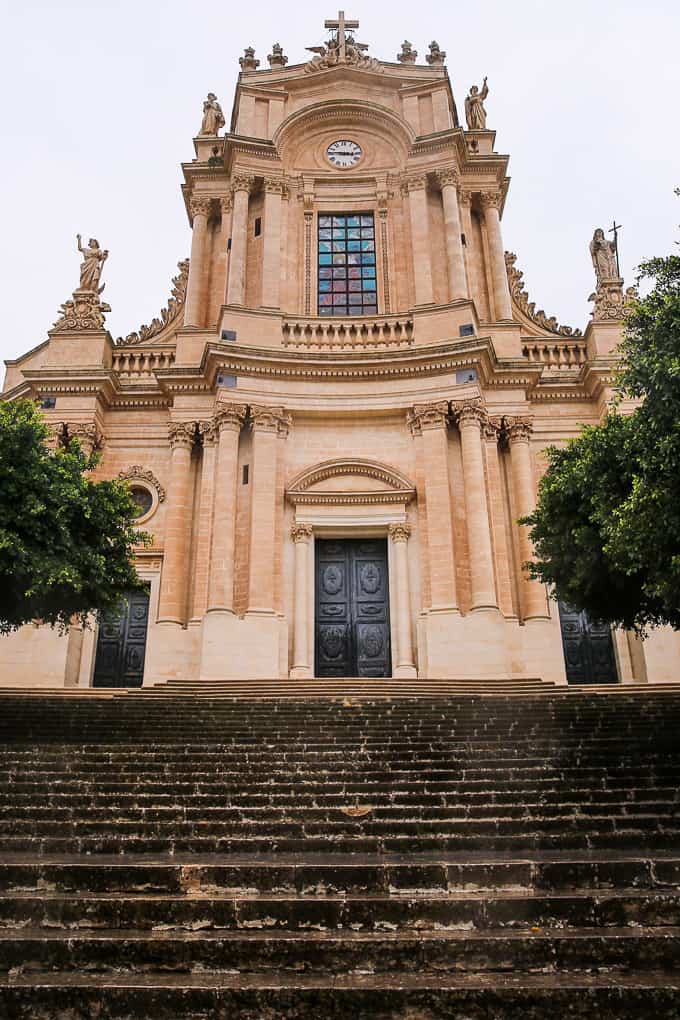 Chiesa di S. Teresa d'Avila is located in the central area of Modica Alta - an upper part of town.   The church is a short walking distance from Chiesa di San Giovanni Evangelista. 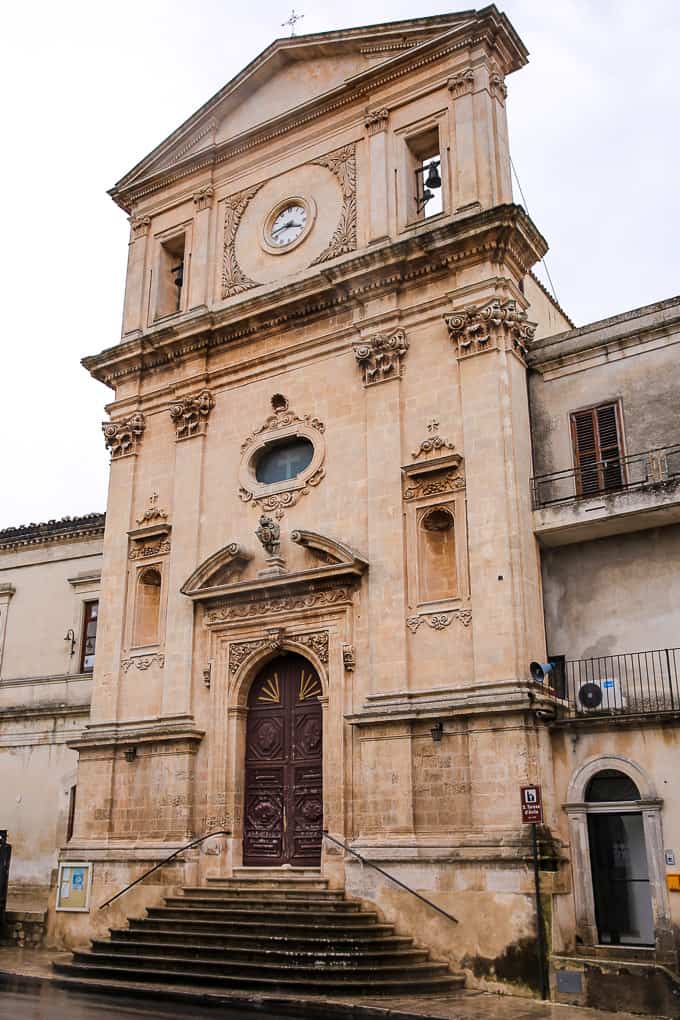 The Church of San Pietro is a Baroque church in Modica Bassa.   The church sits at the top of an impressive staircase decorated with the statues of the 12 apostles.   The interior of the church is spectacular, filled with frescoes and artworks.

The facade of the church houses the statues of Saint Cataldo, Saint Rosalia, Saint Peter, and Madonna.  The statue of Jesus is at the top. 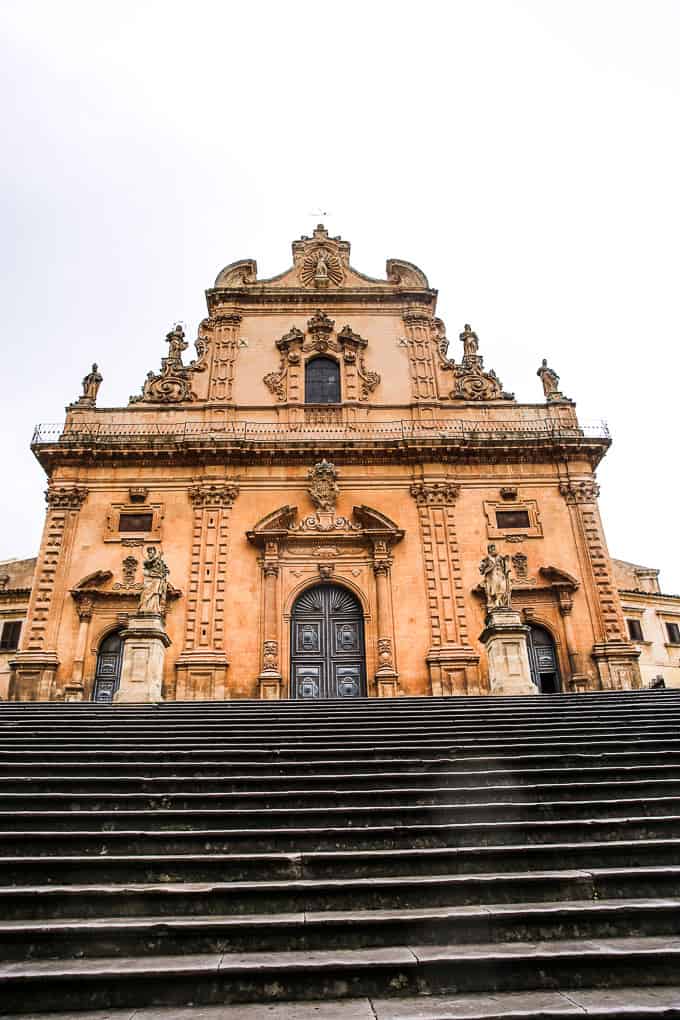 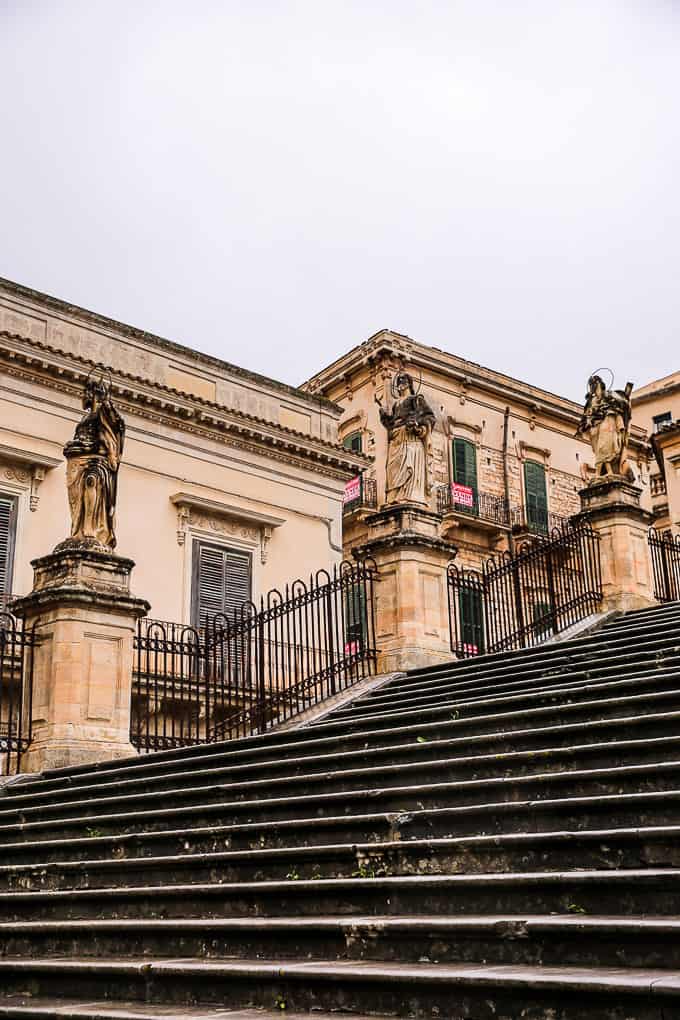 Chiesa del Carmine, also called The church of Santa Maria del Carmelo, was built in the Gothic style in the 14th century. It's one of the few remaining examples of Sicilian Gothic architectural style.

The chocolate is manually ground, giving it a unique grain texture.  There are numerous varieties and flavors: raspberry, pineapple, pomegranate, lemon, pistachio, almond, and many more. 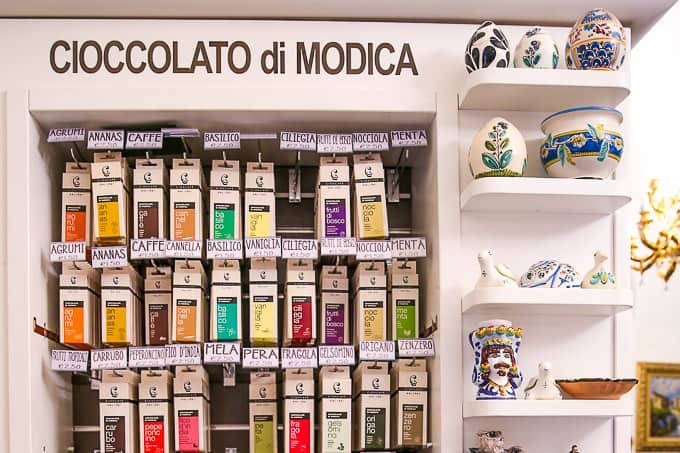 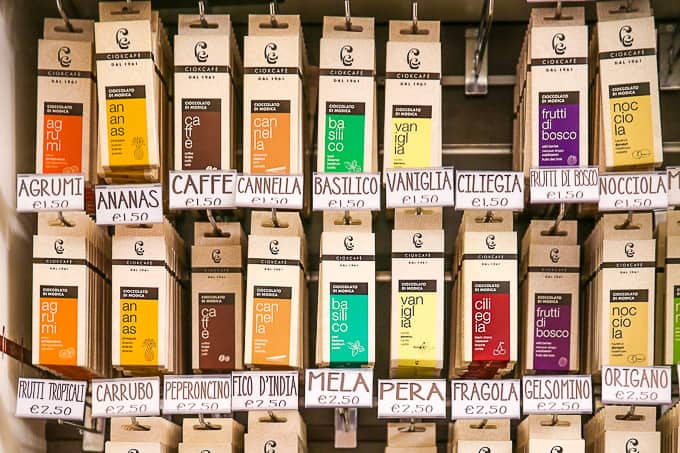 7. The Castle of Modica

At the top of the castle, you are rewarded with spectacular panoramic views.

The Garibaldi Theater was built in 1857 in neoclassic architectural style.  The magnificent interior is extremely well-designed and decorated with paintings.

Pizzo Belvedere (located on Via Pizzo) is a scenic spot that offers spectacular views of Modica and the surrounding area.

Mercedari Palace was built in the 18th century and is currently a museum in Modica.

Modica is one of the most interesting towns in Sicily.  Included into a UNESCO World Heritage Site along with 7 other towns of the Val di Noto area, Modica has a rich historical and cultural heritage.  The town is home to several fine examples of the Sicilian Baroque architecture.     Modica is also famous for its delicious locally produced chocolate, the Cioccolato di Modica.

The town is known for its picturesque views, impressive architecture, old streets, and steep staircases.  It's a beautiful town with a great atmosphere and friendly, welcoming people. 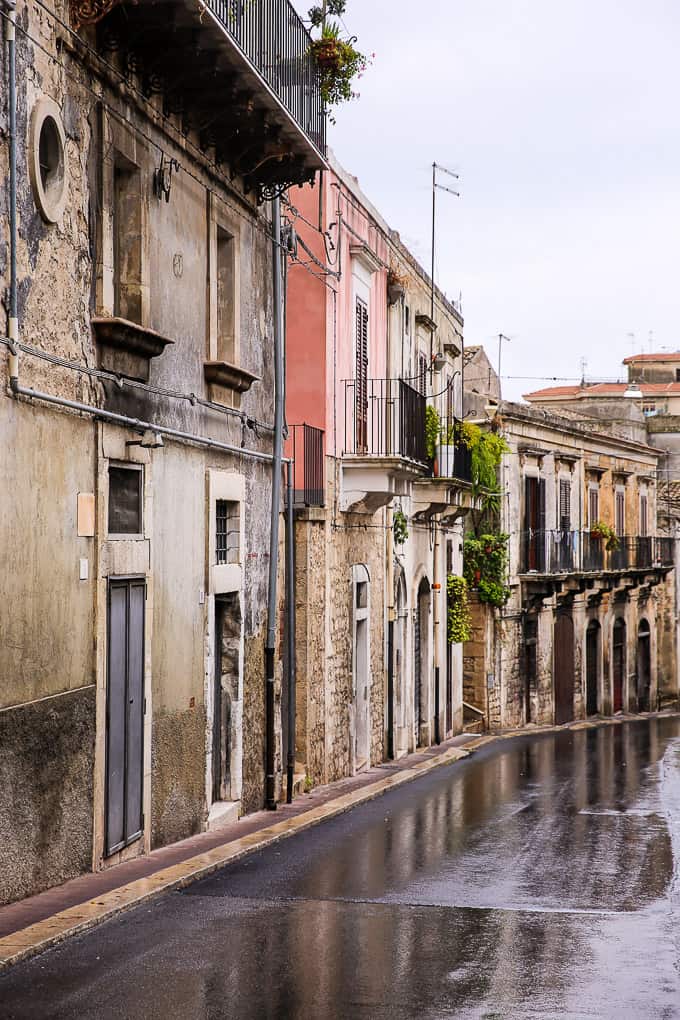 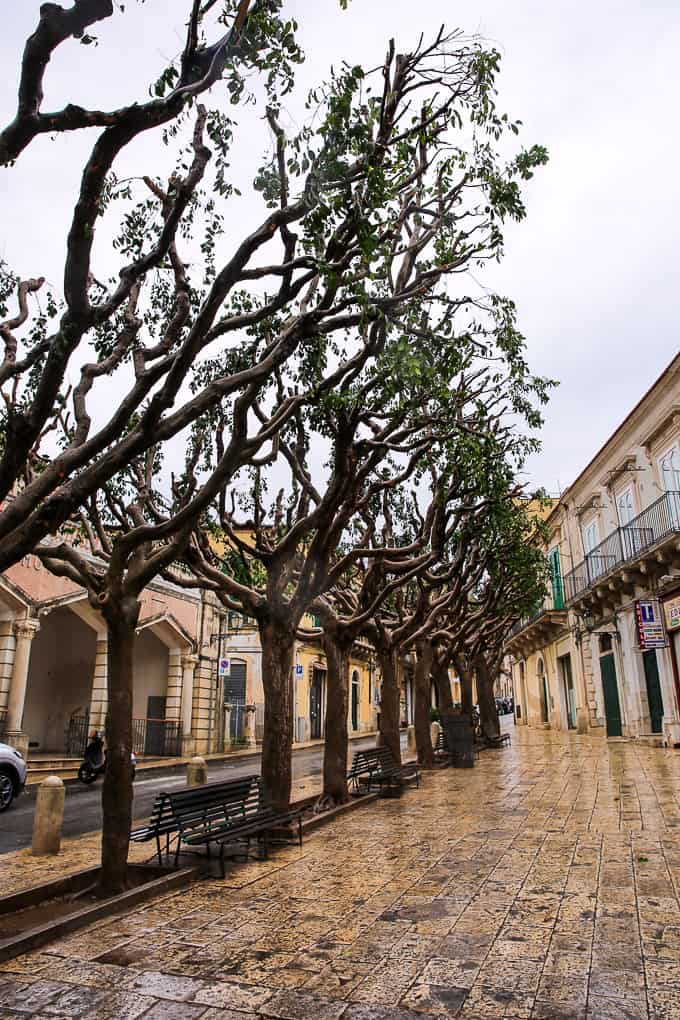 « 10 Best Things To Do in Noto, Sicily
Bar Vitelli in Savoca - the Sicilian Bar from "The Godfather" Movie »
8.7K shares