Noto is a spectacular Baroque city in the province of Syracuse in Sicily.  Located at the foot of the Iblean Mountains, Noto is famous for its stunning Baroque architecture.  Discover the 10 Best Things To Do in Noto including the major architectural sights, such as churches and palaces! 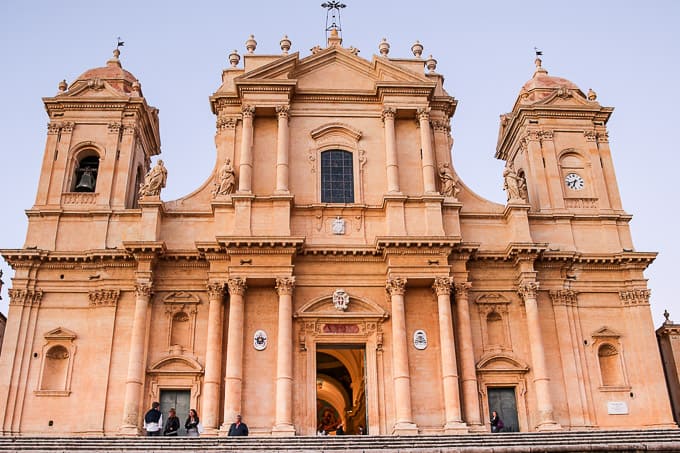 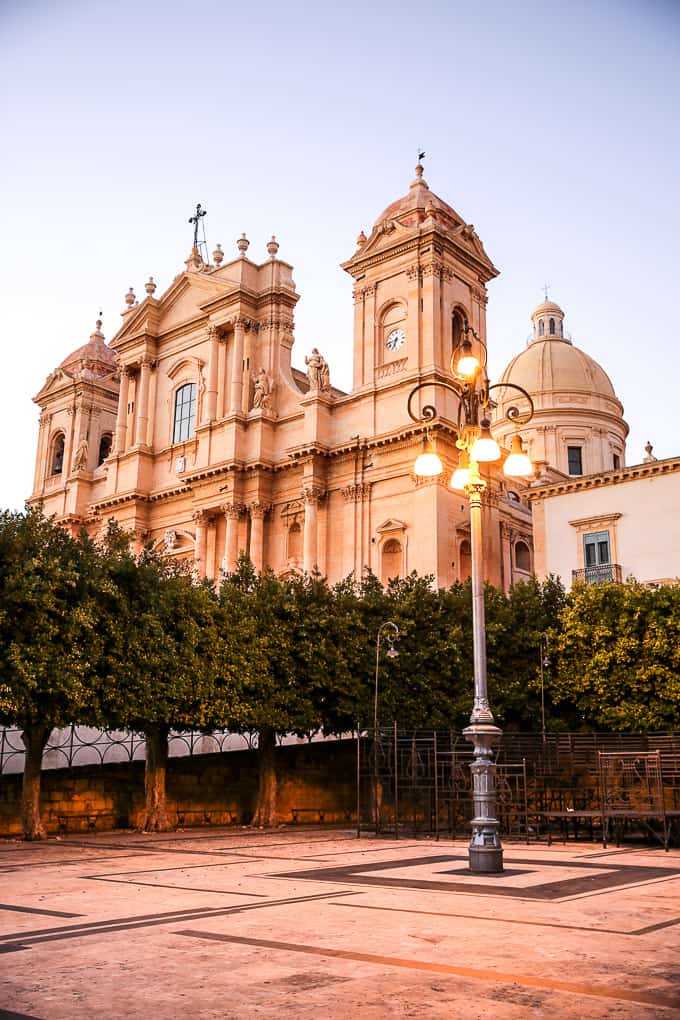 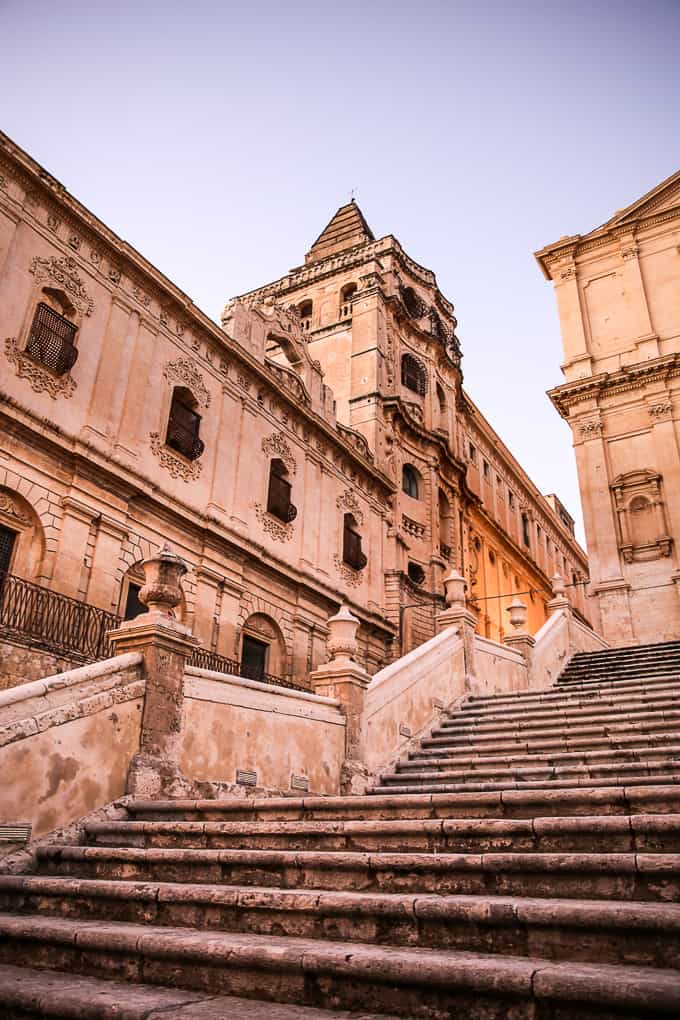 Noto is the architectural paradise with one of the most beautiful historic centers in Sicily. Everywhere you look is an architectural gem, whether it's a fountain, an arch, a church, a palace, or even a staircase or a balcony. 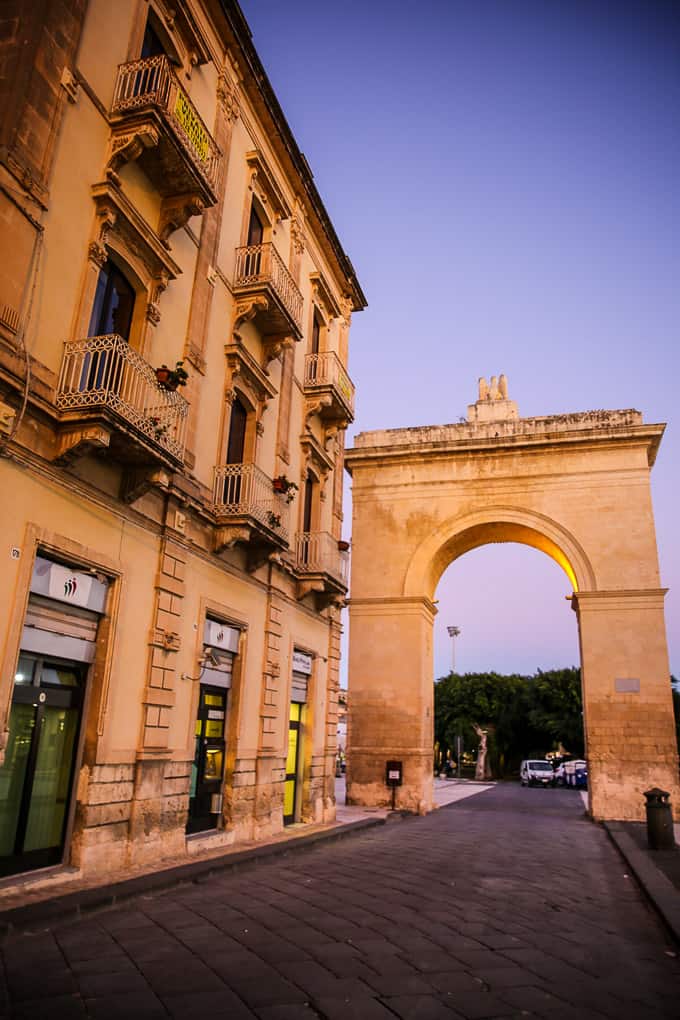 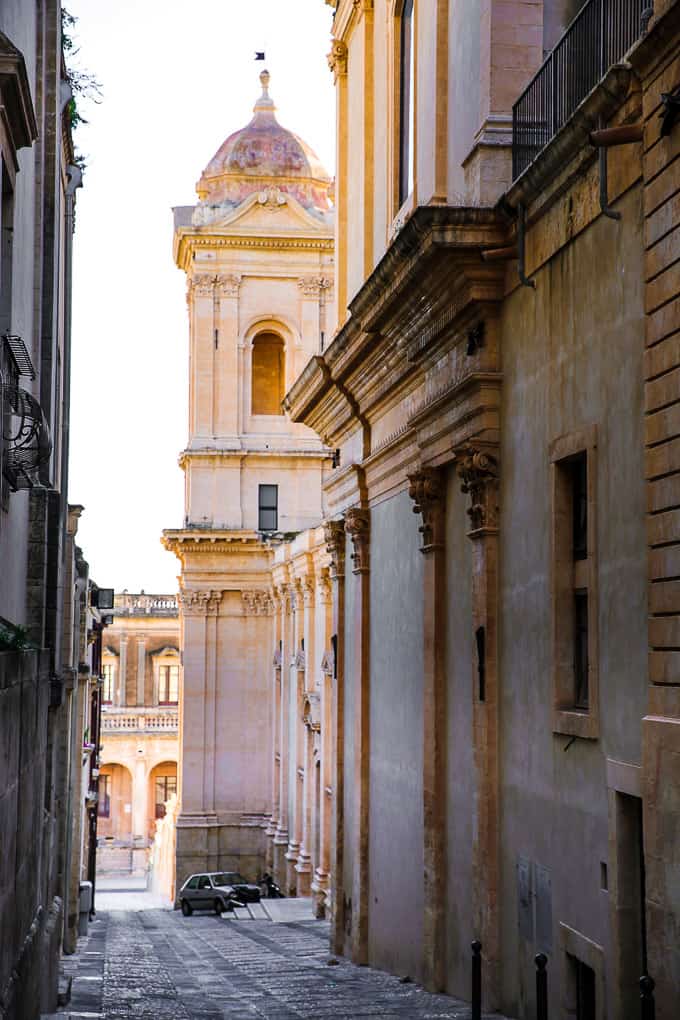 10 Best Things To Do in Noto

Discover the top things to do in Noto including the major architectural sights such as churches and palaces.

Noto Cathedral is a fine example of the Sicilian Baroque style.  The cathedral was constructed in the 18th century and is dedicated to St. Nicholas of Myra.  A part of the cathedral collapsed in 1996 and has been rebuilt.

The exterior of the cathedral was built with yellow limestone.  The left tower of the church features a bell, while the right tower has a clock. 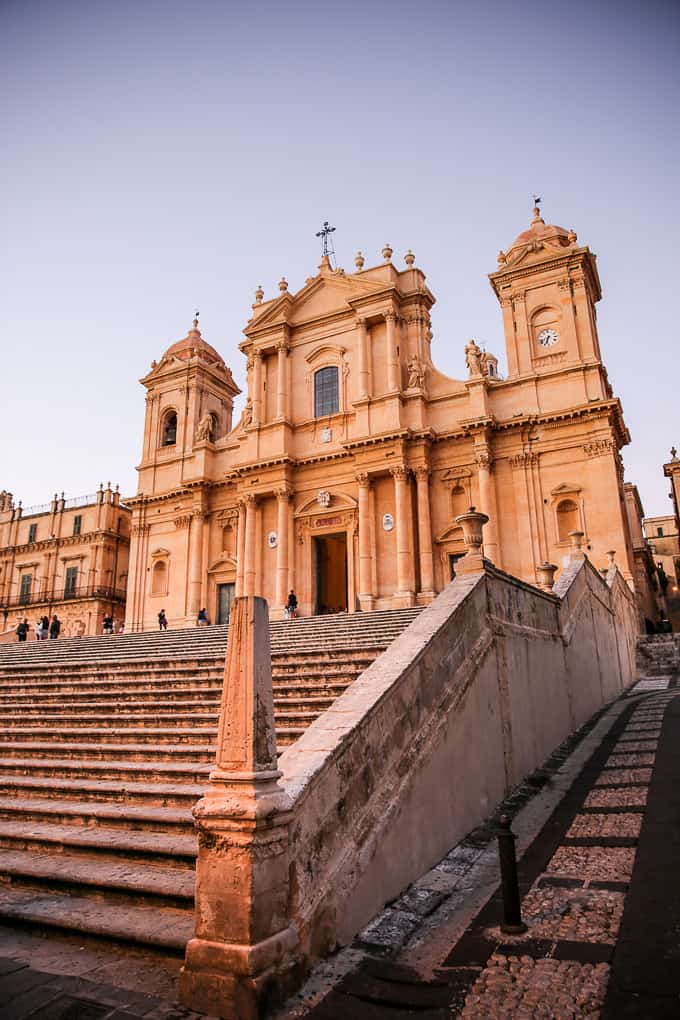 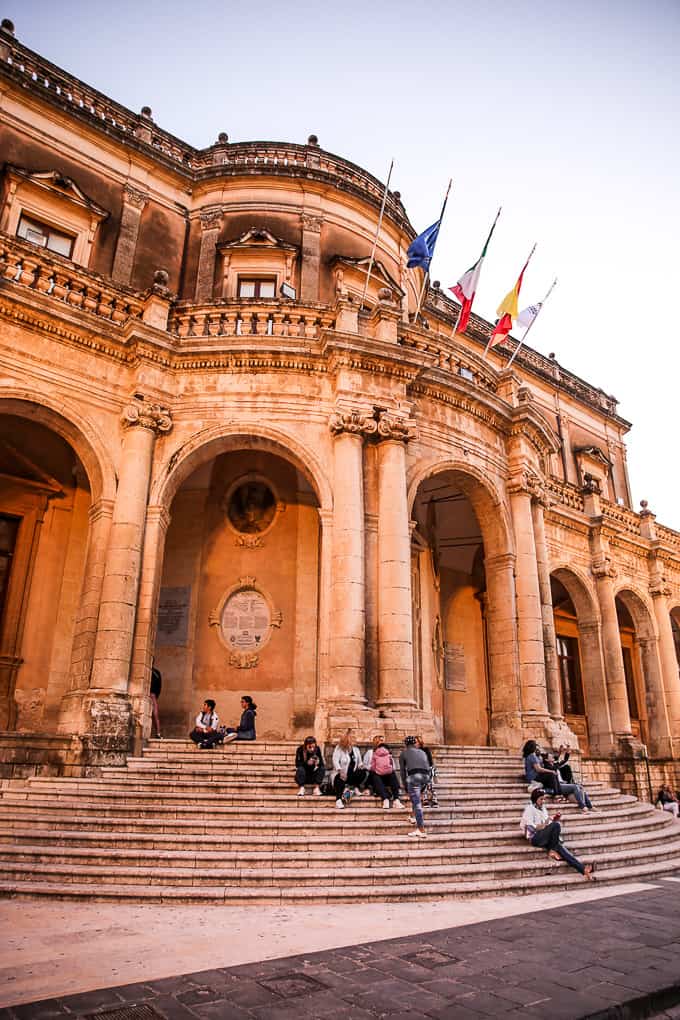 Palazzo Nicolaci is one of the finest examples of the traditional Sicilian Baroque architecture.  It is an 18th-century palace located in the center of Noto and is famous for its balconies decorated in Baroque style.

The balconies feature the sculptures of grimacing creatures, including mermaids, lions, hippogriffs, winged horses, and other mythical creatures.

The palace used to be an urban residence of the Nicolaci family.  The building was designed by Rosario Gagliardi and built with the help of his student Vincenzo Sinatra. 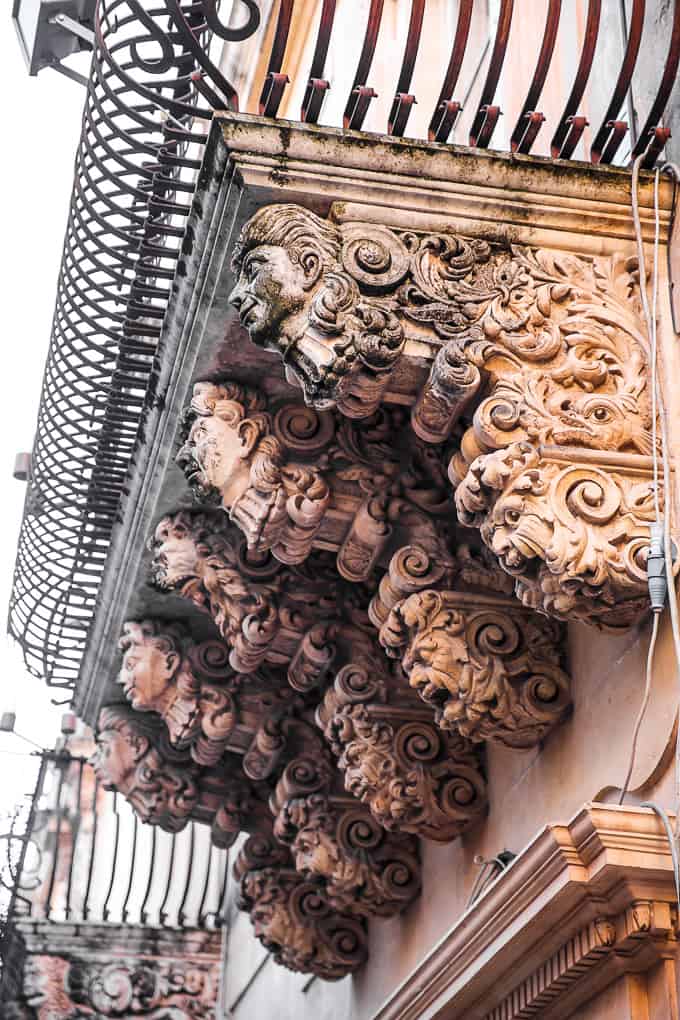 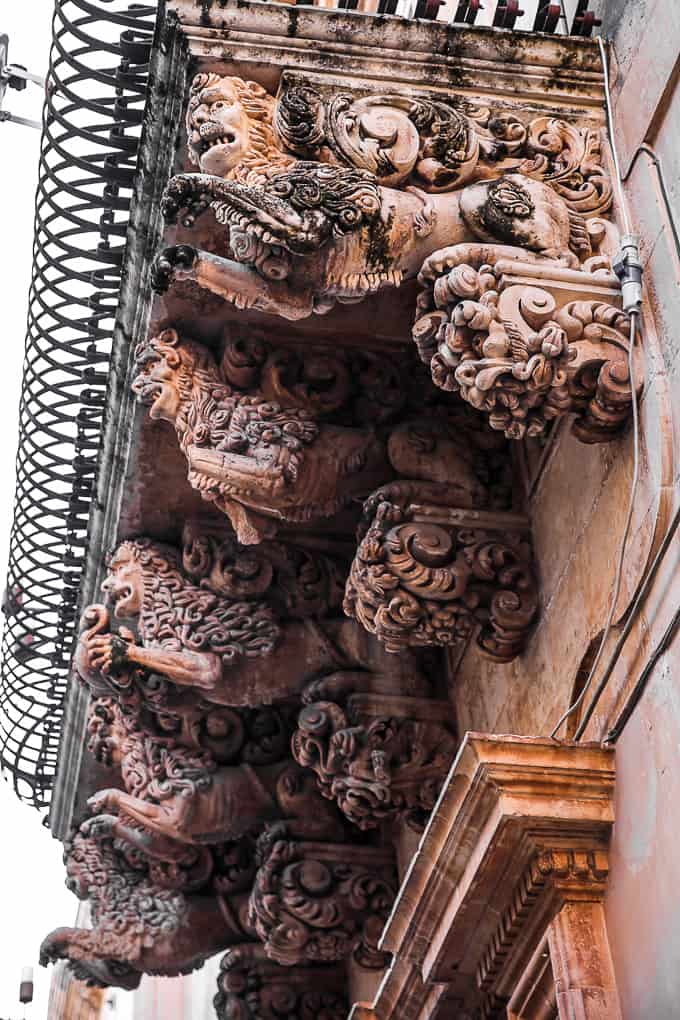 4. The church of St. Charles Borromeo

A climb the top of the bell tower (Il Campanile di San Carlo) will provide you with spectacular views of Noto, and some of the best views of the Baroque architecture from above.

5. The Church of San Domenico

The church of San Domenico was built in the 18th century, based on the designs of Rosario Gagliardi (one of the leading architects of the Sicilian Baroque style).

Church of San Francesco d'Assisi all'Immacolata was built in the 18th century by architects Rosario Gagliardi and his pupil Vincenzo Sinatra.  The front of the church features an impressive staircase, Baroque columns, and marble statues.   The staircase leads from the church's entrance to the Corso Vittorio Emanuele, the main street in Noto. 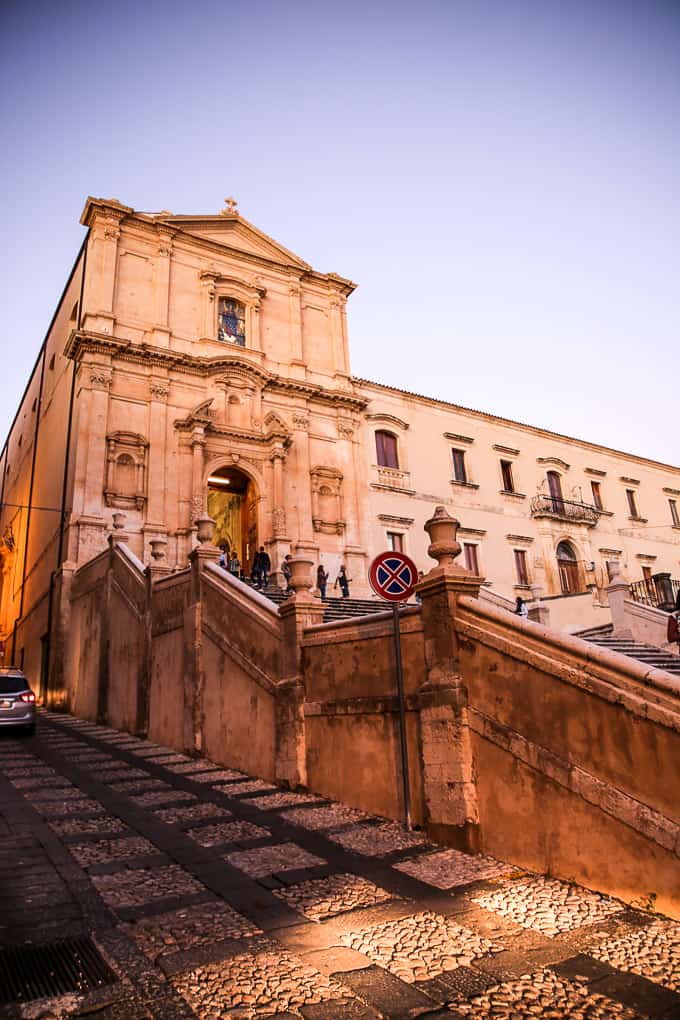 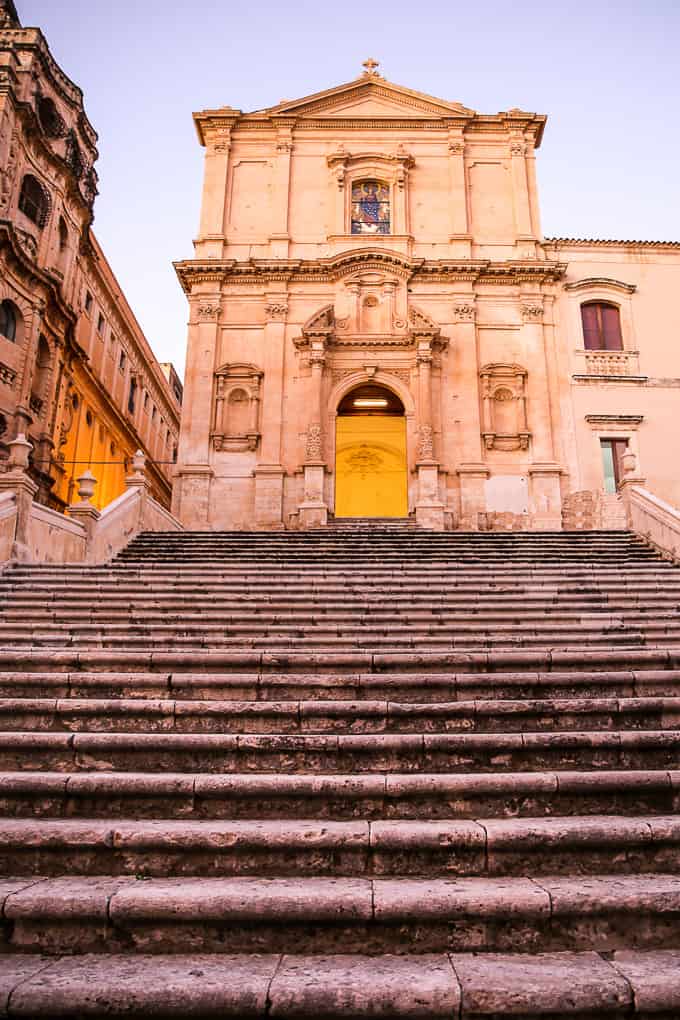 This beautiful street is lined with stunning Baroque architecture, fountains, staircases leading to churches, and piazzas.  It's the center of the historical area of Noto, bustling with architectural beauty and life.

As you walk down the Corso Vittorio Emanuele, you will see quite a few churches, cute piazzas, fountains, intricate Baroque style facades of historical buildings.

If you are in Noto for a quick visit, this is the street to explore!

Church of Santa Chiara was built in the 18th century by Sicilian architect Rosario Gagliardi.  It's a beautifully designed Baroque church with a spectacular outside terrace that offers a fantastic panoramic view of the city of Noto.

Palazzo Landolina was built in the 18th century on the order of the nobleman Francesco Landolina.

There is also a bell tower that you can climb to enjoy fantastic panoramic views of Noto.

Manna is an amazing restaurant in Noto, offering the Mediterranean cuisine.  The food is delicious with a beautiful presentation.  An elegant and friendly atmosphere. The restaurant is beautifully designed, and the service is impeccable.

Dammuso is one of the best restaurants in Noto.  It features exceptional local Mediterranean cuisine with lots of seafood.   Great seafood, pasta, and wine! 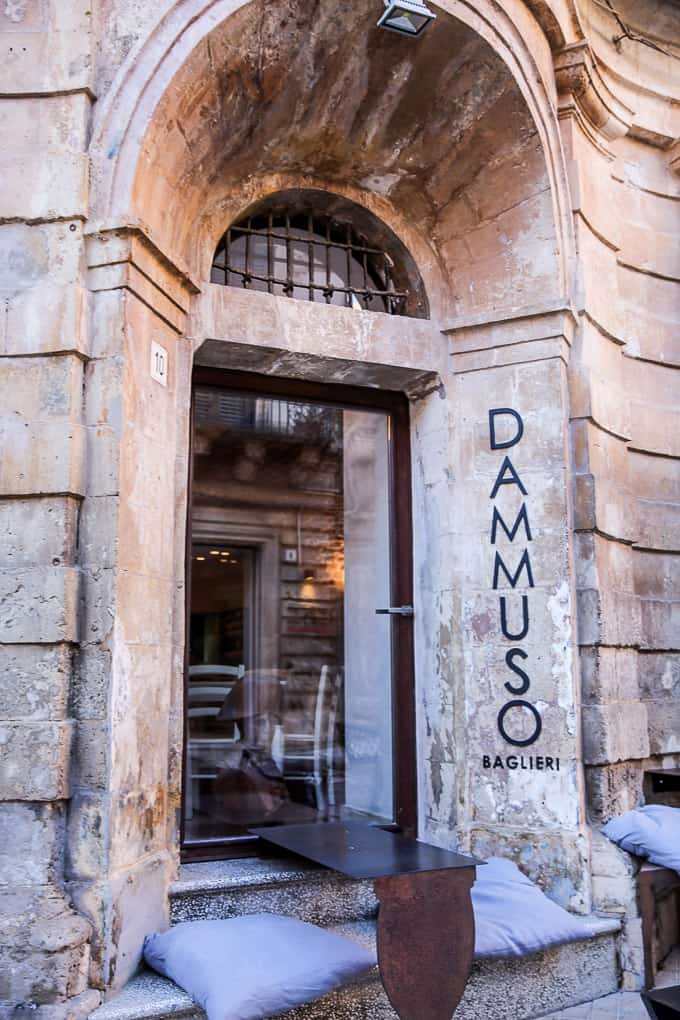 Where to Stay in Noto

There are 2 options to consider in choosing your hotel in Noto.  You can stay either right in Noto within walking distance to all the attractions, or you can stay further away, in the Sicilian countryside, and make a day trip or two to Noto.

1. Stay in the center of Noto

If you want to be right in the center of Noto for a day or two, within walking distance to all of the major landmarks and sights, there are quite a few hotels to choose from.

2. Stay in the Sicilian countryside

However, the preferred option is to stay outside of Noto, in a resort-like setting close to Noto.   If you prefer to stay in a luscious Sicilian countryside but still be a short car drive away from Noto, then stay at Masseria della Volpe.

Masseria della Volpe is a stunning resort in Sicily, Italy. Located in Val di Noto area of Sicily, this hotel is set in the beautiful Sicilian countryside. The location is strategically close to many historical Sicilian cities, such as Noto, Modica, and Ragusa.