Ragusa is a beautiful and unique historical town in Sicily.  Located on a hilltop, it's famous for its unusual geographical layout and stunning Sicilian Baroque architecture.  Discover The 10 Best Things To Do in Ragusa Ibla and Ragusa Superiore! 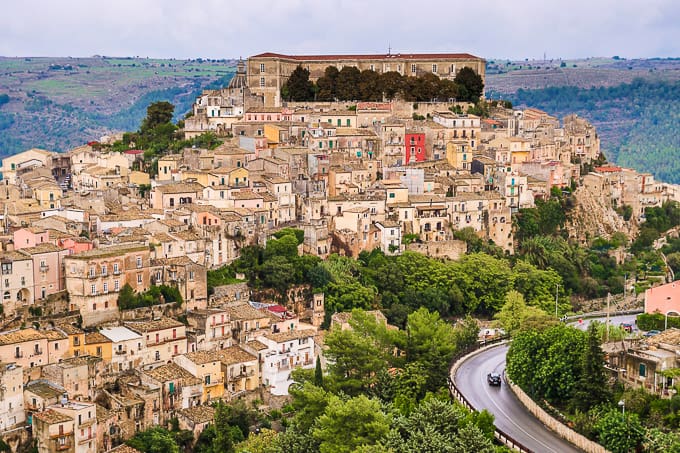 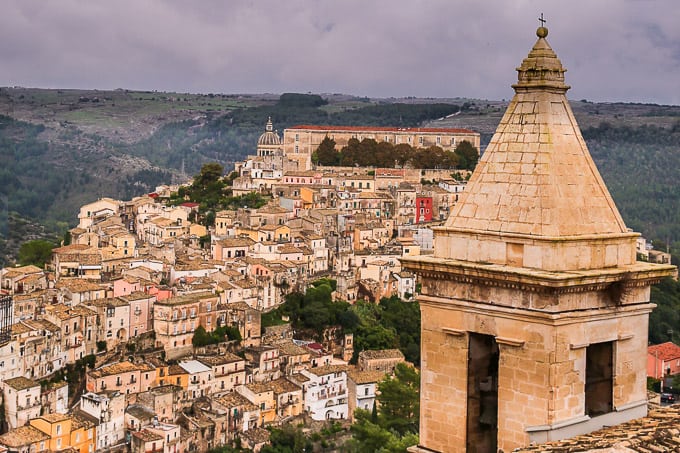 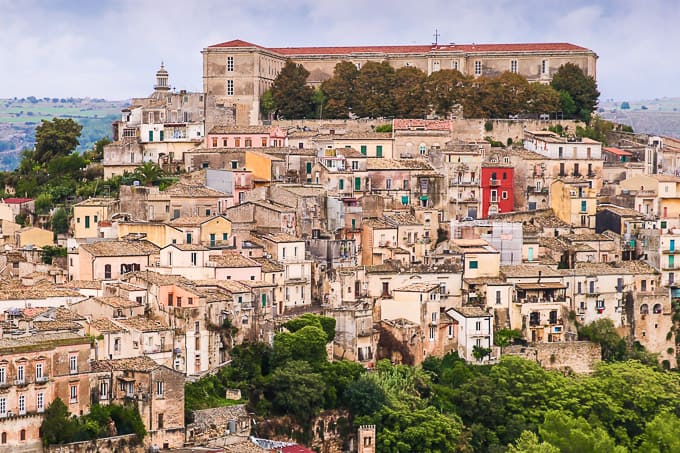 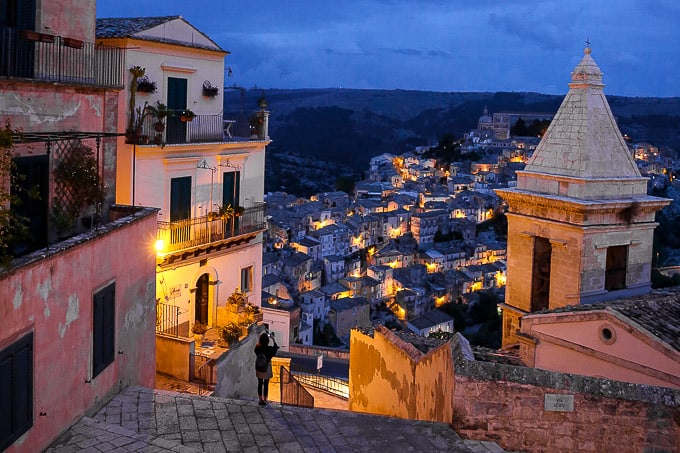 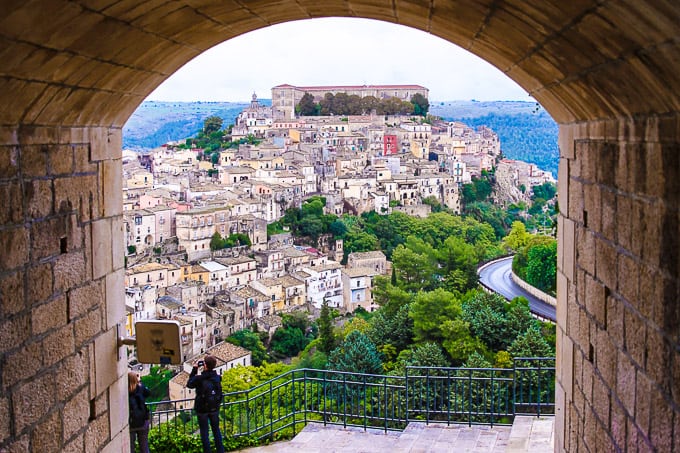 10 Best Things To Do in Ragusa

Ragusa is known for its traditional Sicilian Baroque architecture.  It's a beautiful town with a unique layout.   Ragusa is divided into two towns: Ragusa Ibla (lower old town) and Ragusa Superiore (upper town).  These two parts of Ragusa are separated by a deep ravine. You can walk between the two parts of town and observe stunning views of Ragusa Ibla from above. 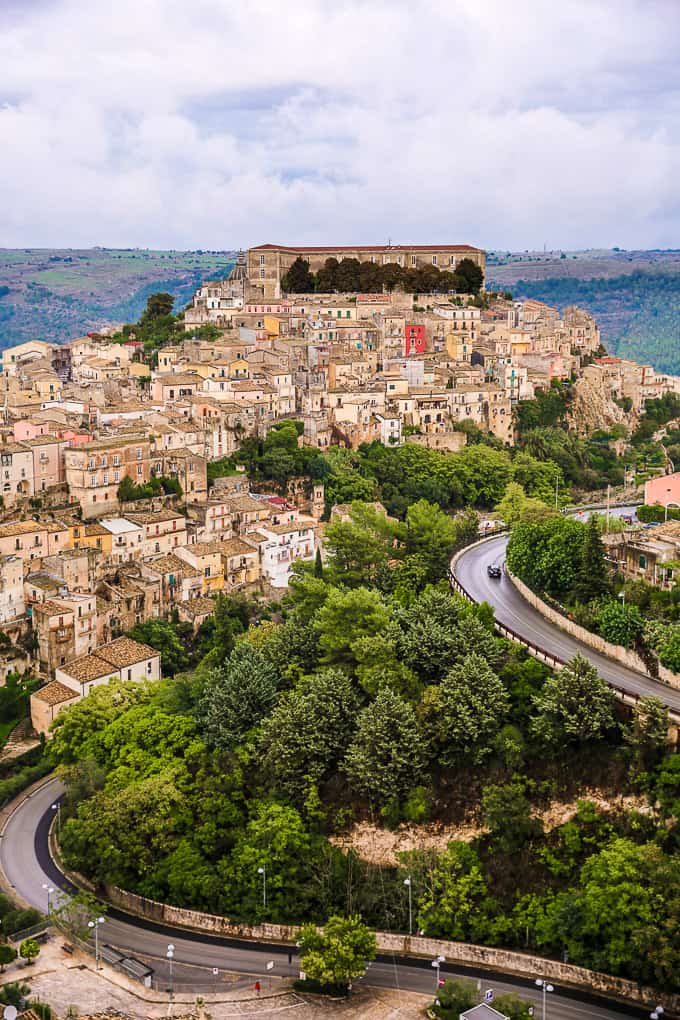 The Cathedral of San Giorgio also called the Duomo of San Giorgio is a stunning Baroque church in Ragusa Ibla (lower old town).   It was built in the 18th century.   The facade of the church is a great example of Sicilian Baroque architecture and one of the reasons why Ragusa is designated as a UNESCO World Heritage Site for its Baroque art.

There are 250 steps in front of the Cathedral.  The church is topped by a large beautiful dome built in 1820.  The dome is visible from many points in Ragusa. 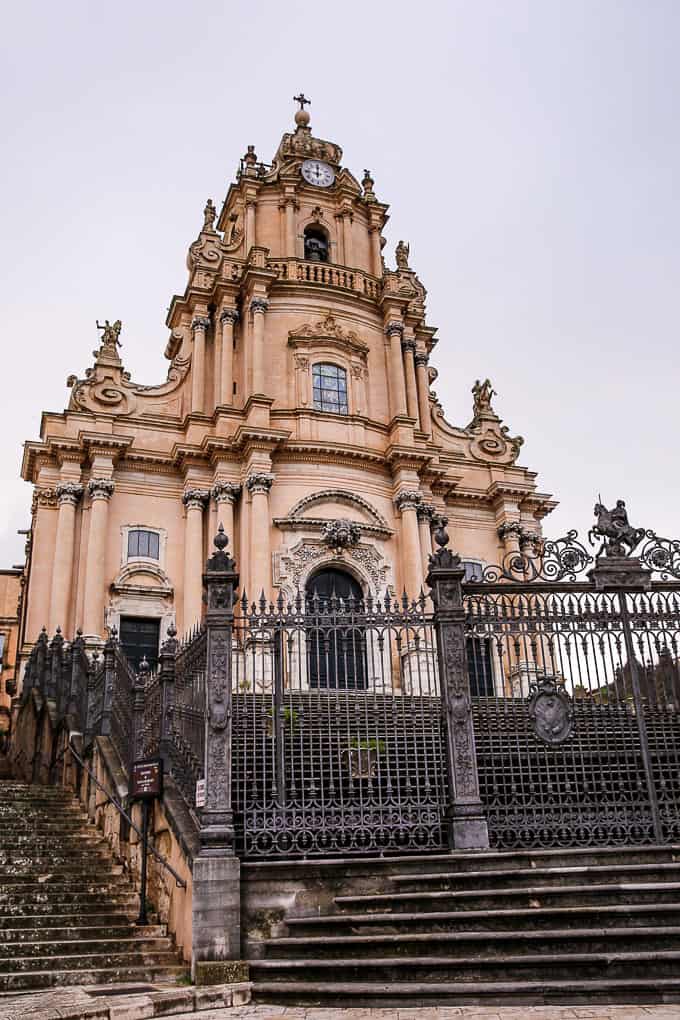 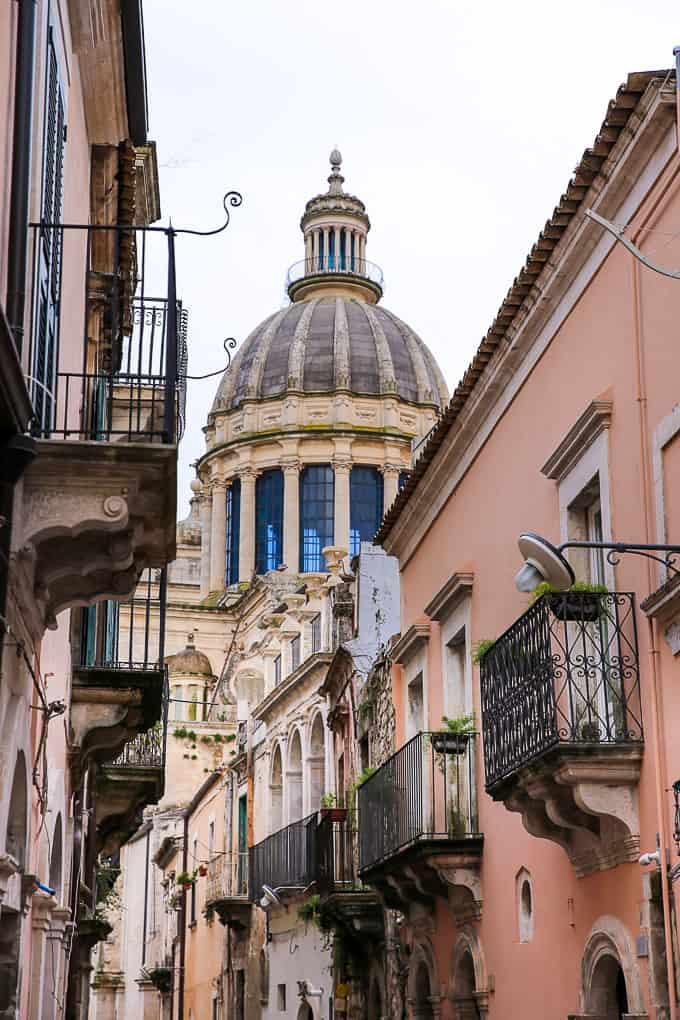 The interior of the Cathedral is equally stunning. 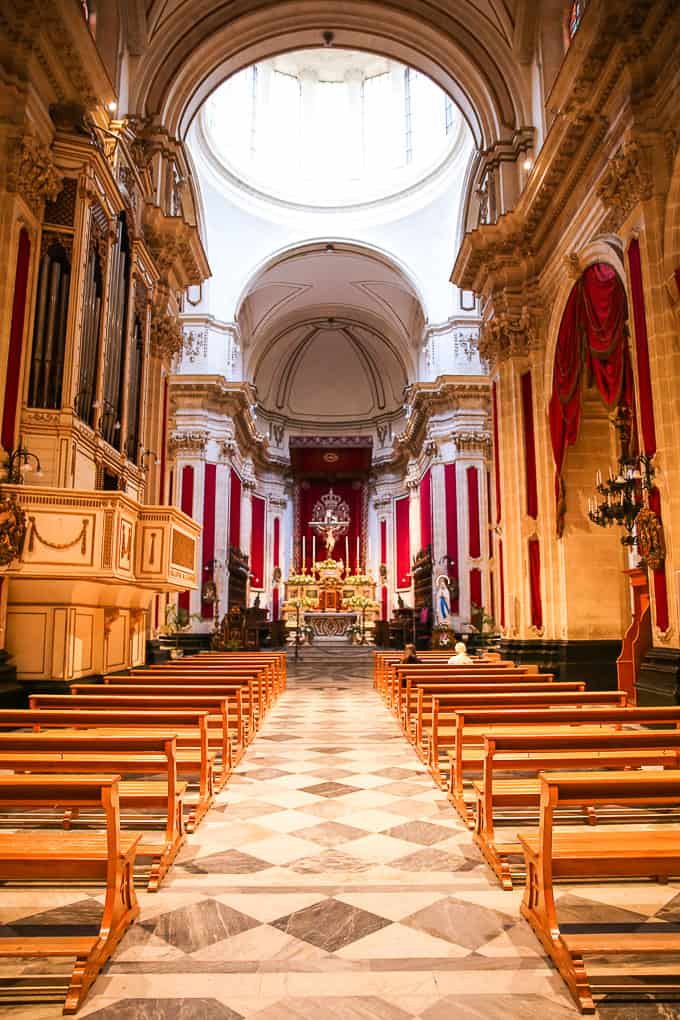 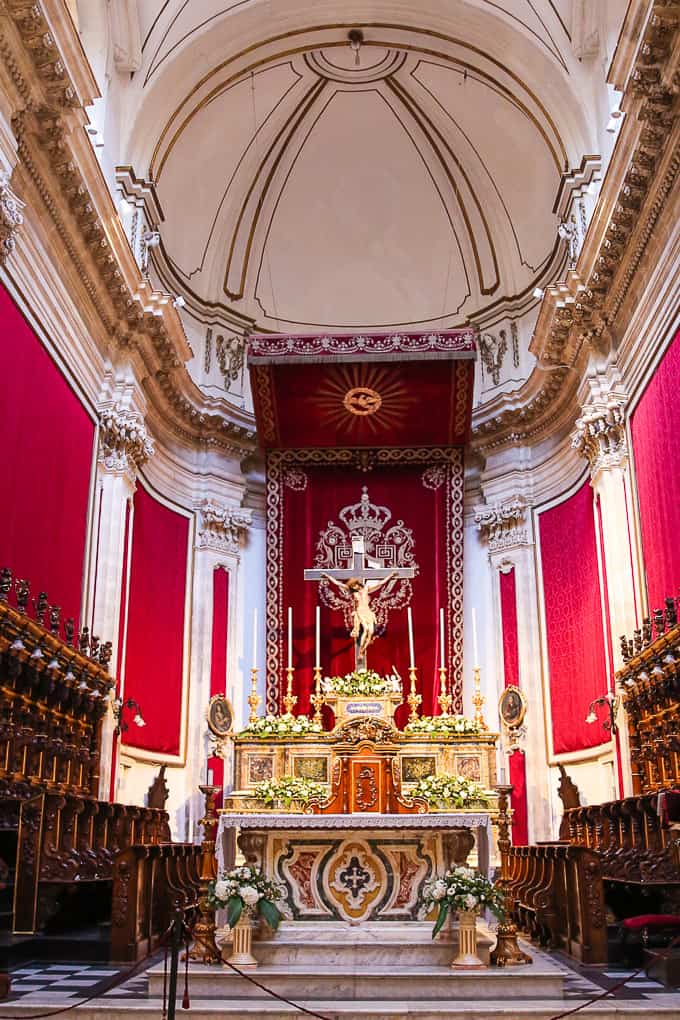 The Church of Santa Maria delle Scale is a church located between Ragusa Ibla and Ragusa Superiore, on a winding street connecting the two parts of the city.  It's especially well visible when you walk down the stairs from Ragusa Superiore to Ragusa Ibla.  In fact, Santa Maria delle Scale is translated as "St. Mary of the Stairs", since the church is located along the stairway.

The church was built in Gothic style by Cistercian monks in the 13th century.  In the 18th century, the church was enlarged and rebuilt in Baroque style. 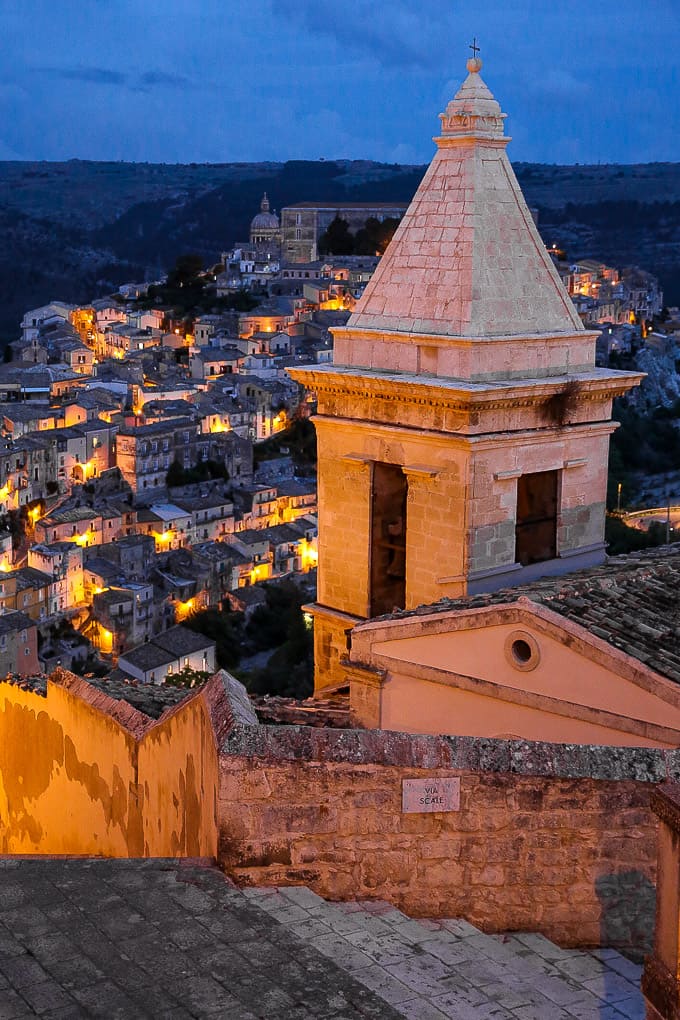 The church of San Giuseppe is located in Ragusa Ibla (lower old town) and it's notable for its exceptionally stunning Baroque facade.

The church was built in the 18th century.  The facade of the church is decorated with statues of Saints of the Benedictine orders. 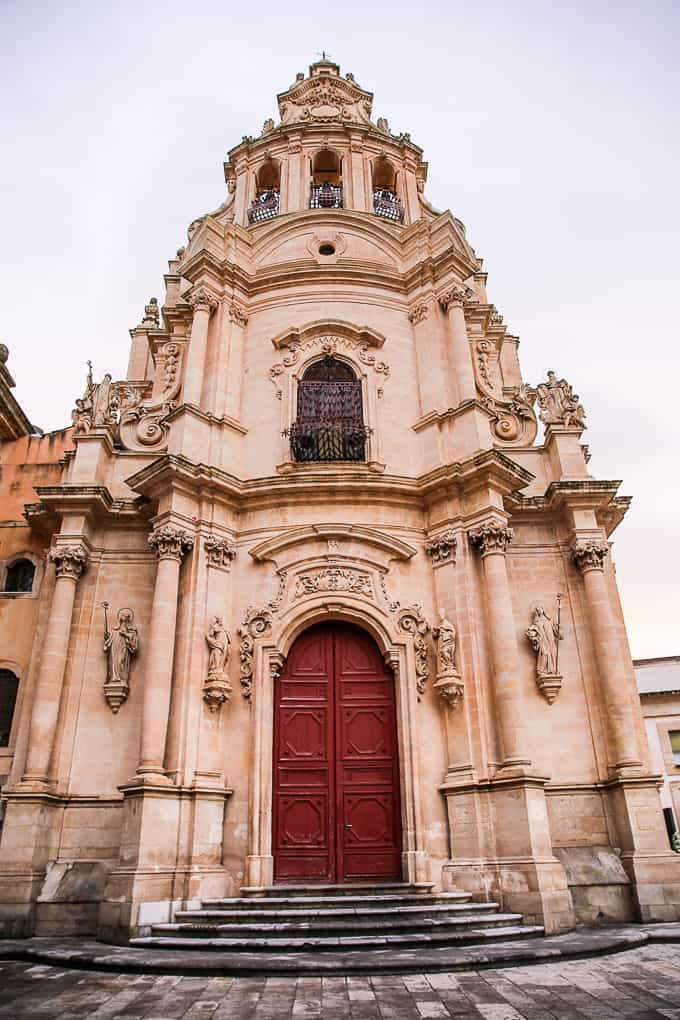 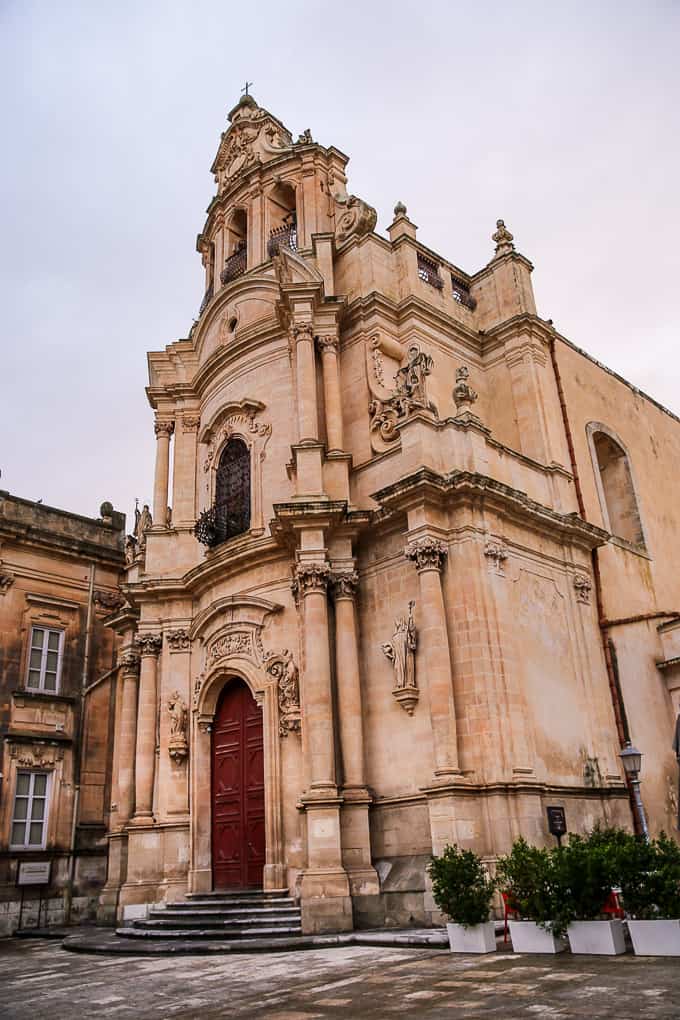 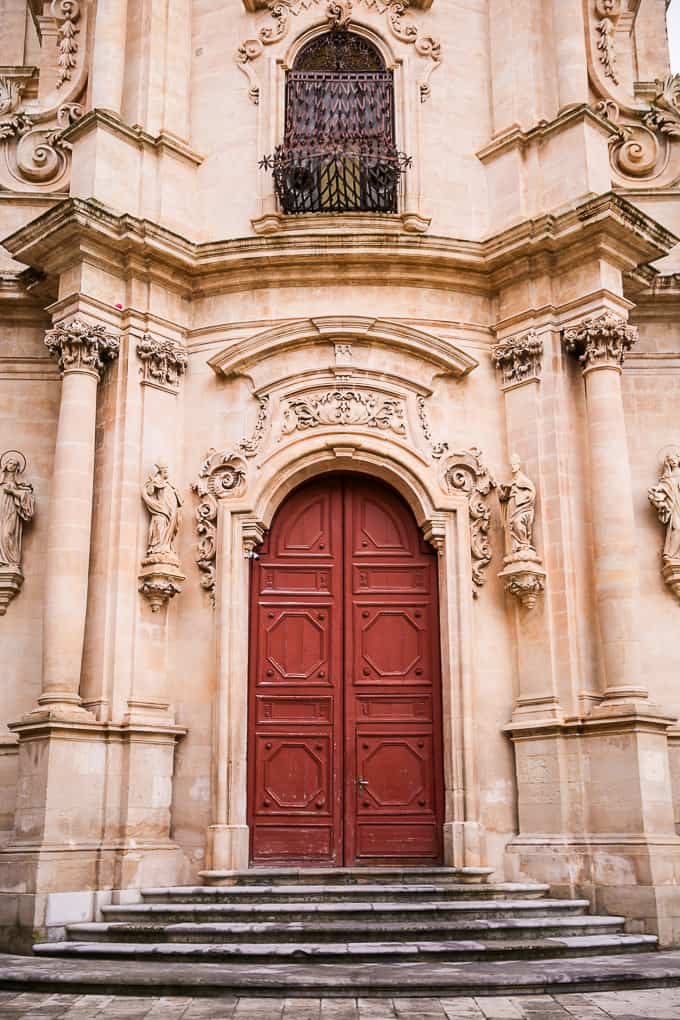 4. The Church of the Souls of the Purgatory

The Chiesa del Purgatorio (translated as the Church of the Souls of the Purgatory) is located in Ragusa Ibla, a lower and older part of Ragusa.  The church features a beautiful Baroque facade.

The church dates back to the 17th century.

Santa Maria dell' Itria is another Baroque church in Ragusa Ibla.   The church was built in the 14th century under the direction of the Knights of Malta (a medieval Catholic military order).  The church features a stunning Maiolica bell tower and a beautiful interior with Corinthian columns. 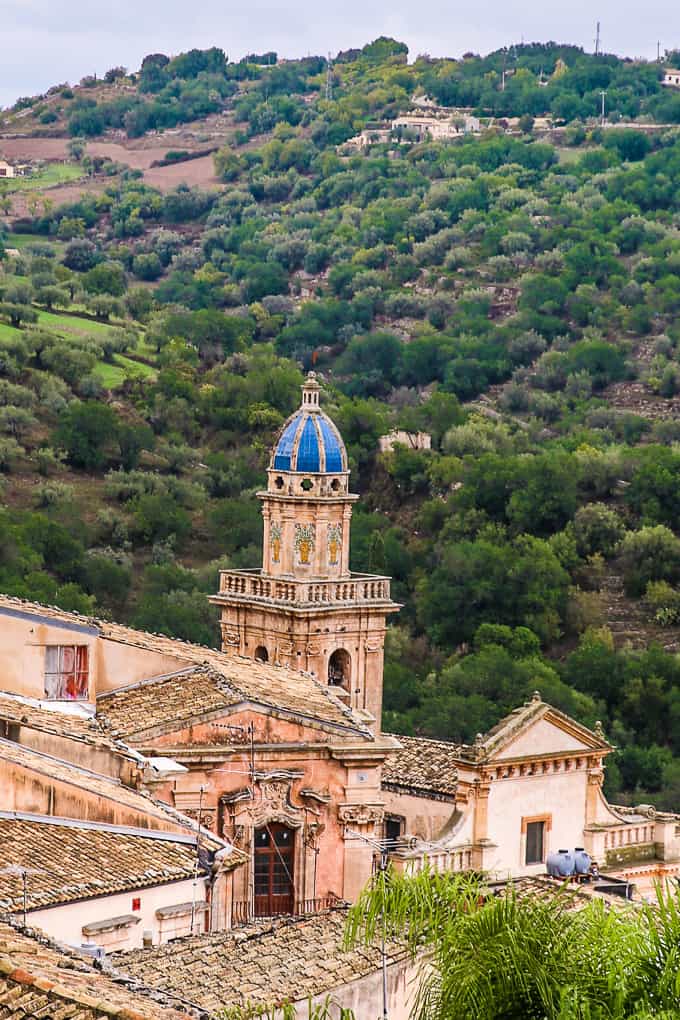 The church of San Filippo Neri was built in the 17th century.  The church is another example of Baroque architecture in Ragusa Ibla.

The church of Sant'Antonino was built in Norman architectural style.

The facade of the church is done in a traditional Sicilian Baroque style. 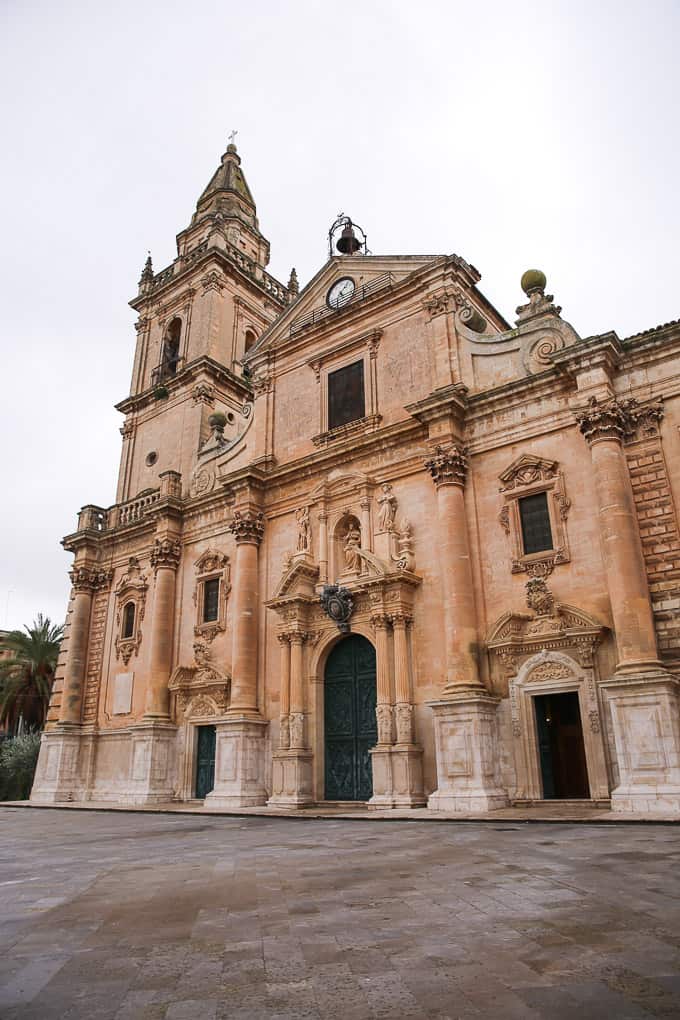 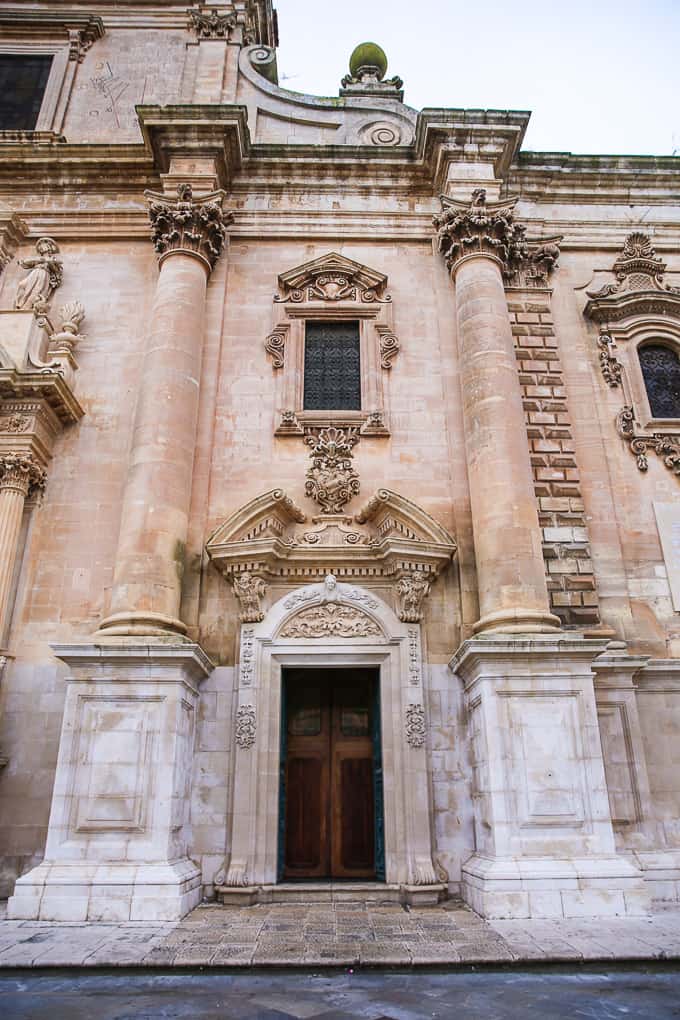 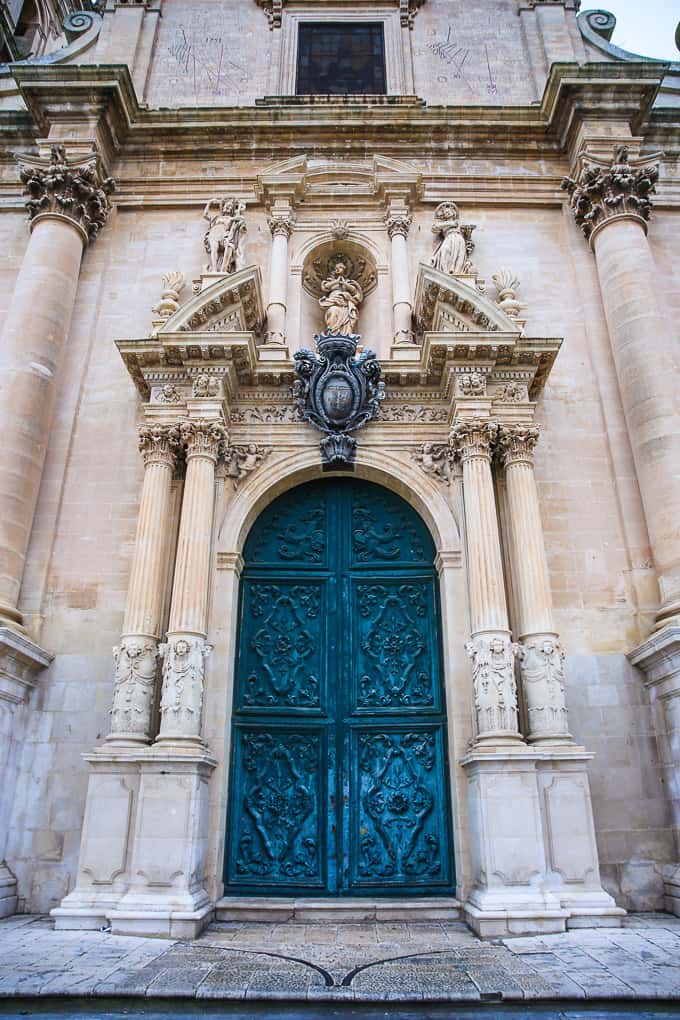 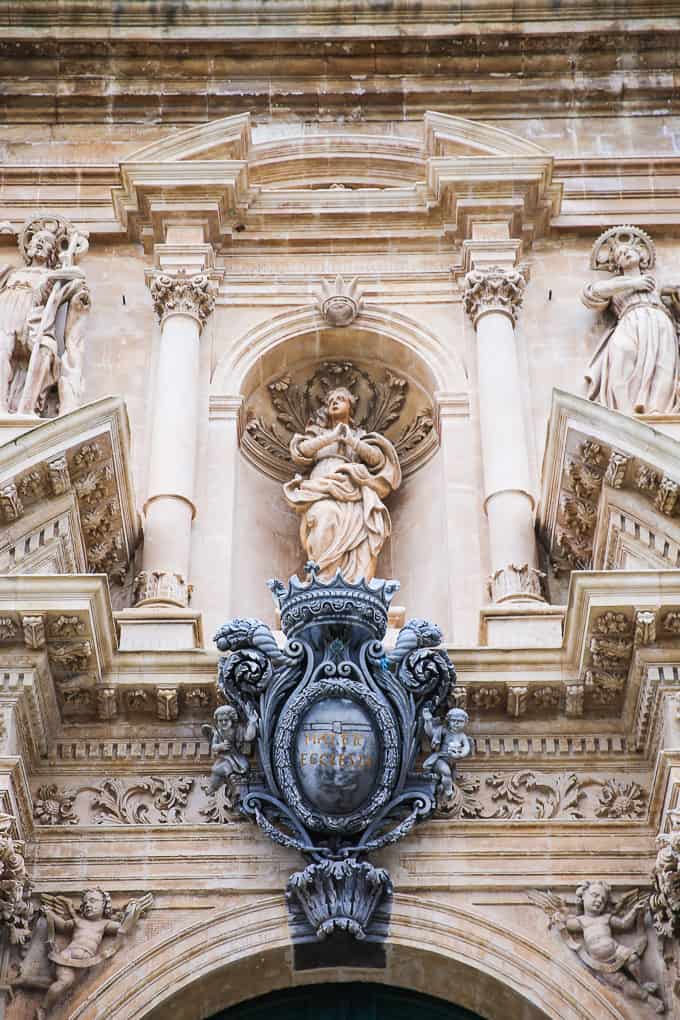 The interior of the church was decorated in the 19th and 20th centuries. 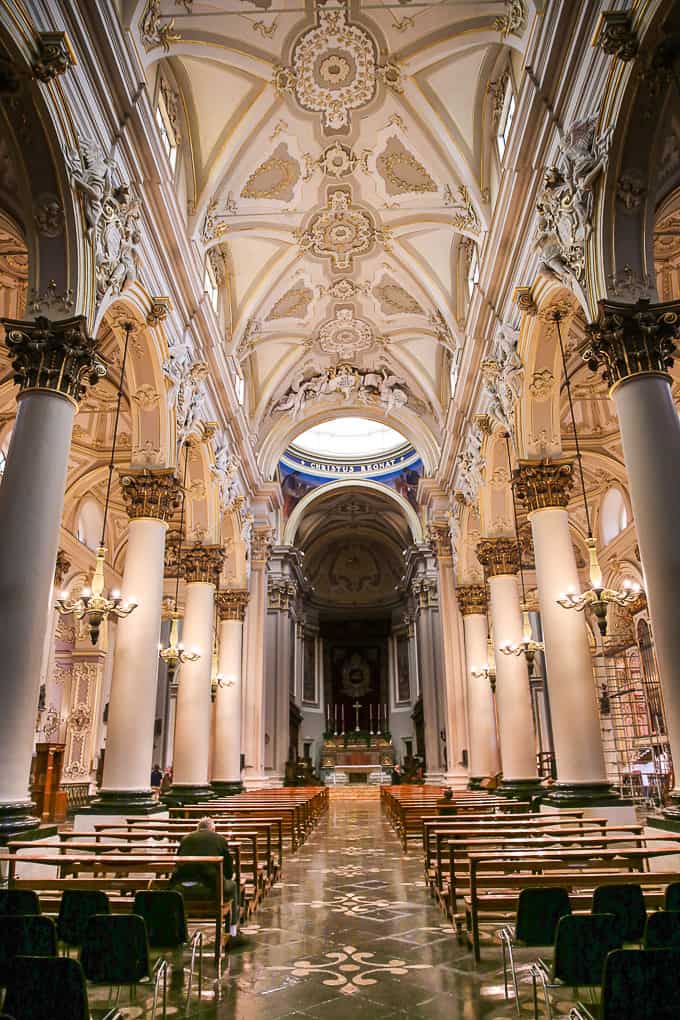 You can see pretty much the whole town of Ragusa Ibla from that staircase.  The views are amazing. 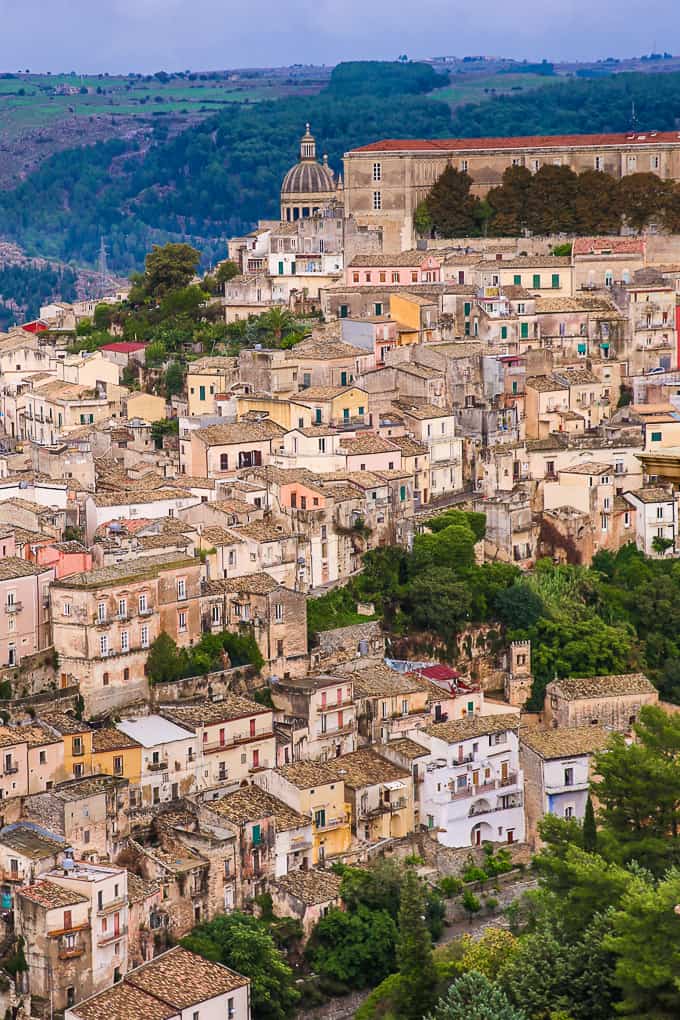 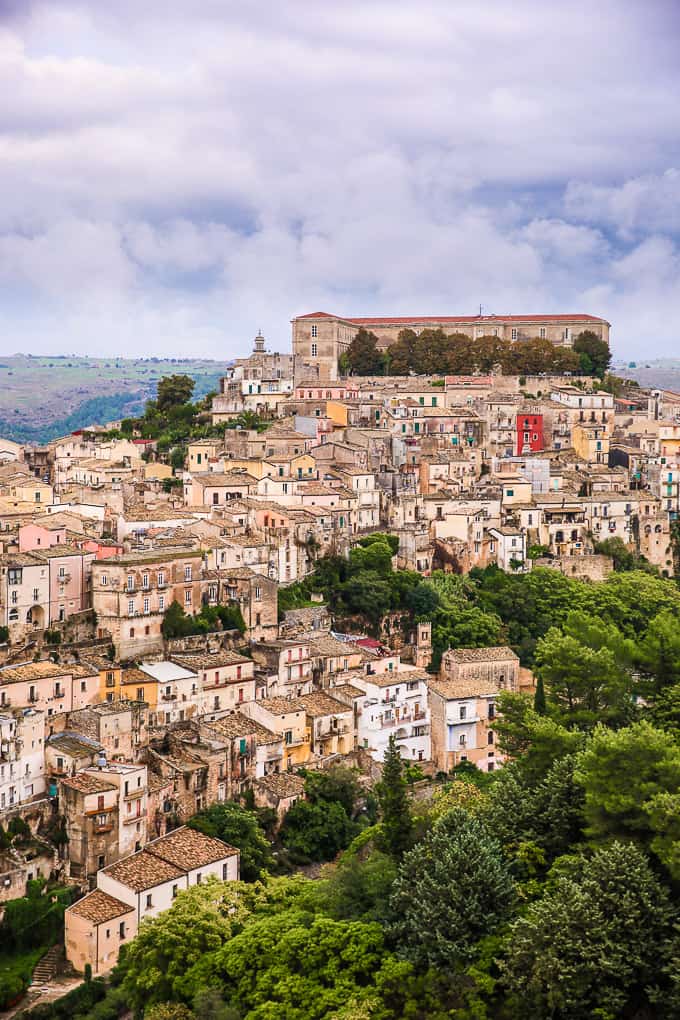 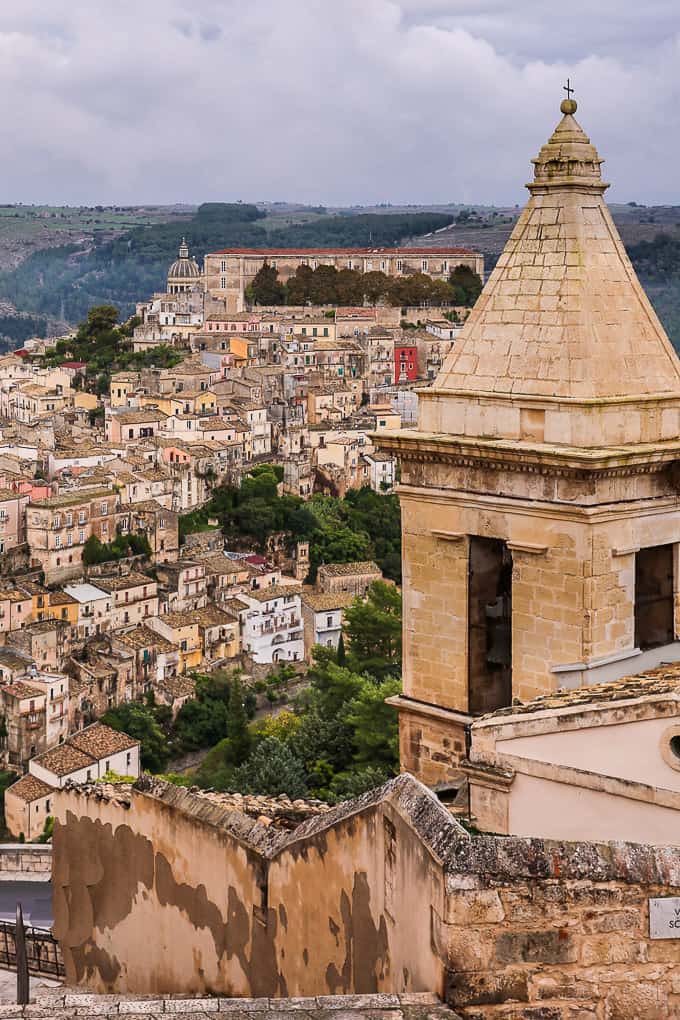 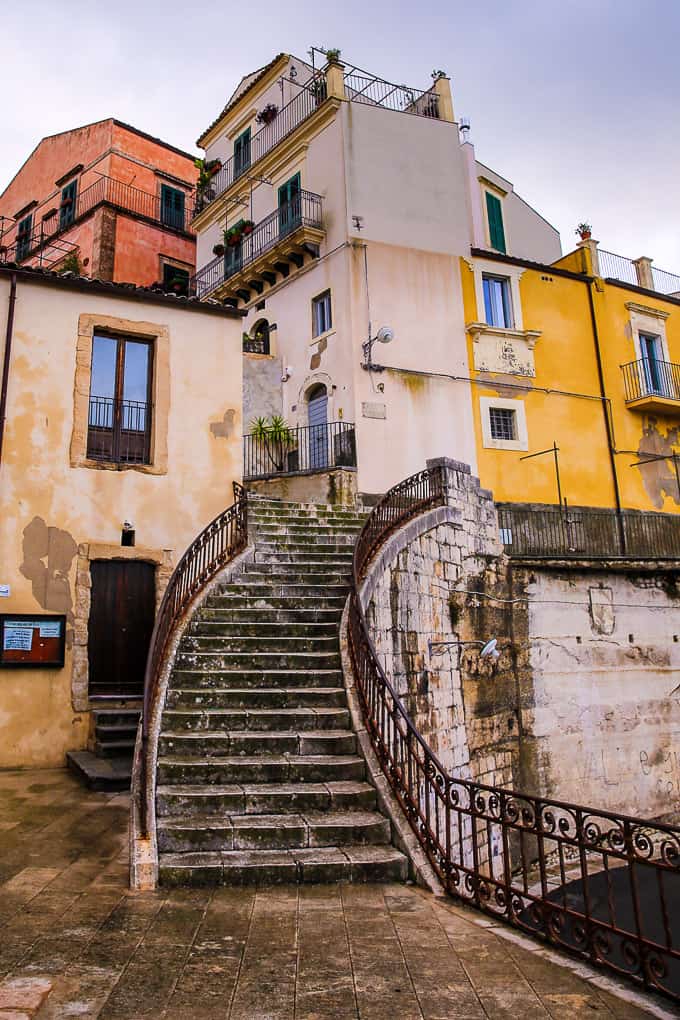 10. View of Ragusa Ibla at night

Ragusa Ibla looks majestic at night as seen from the winding streets and staircase path from Ragusa Superiore.  The views are breathtaking, especially at night. 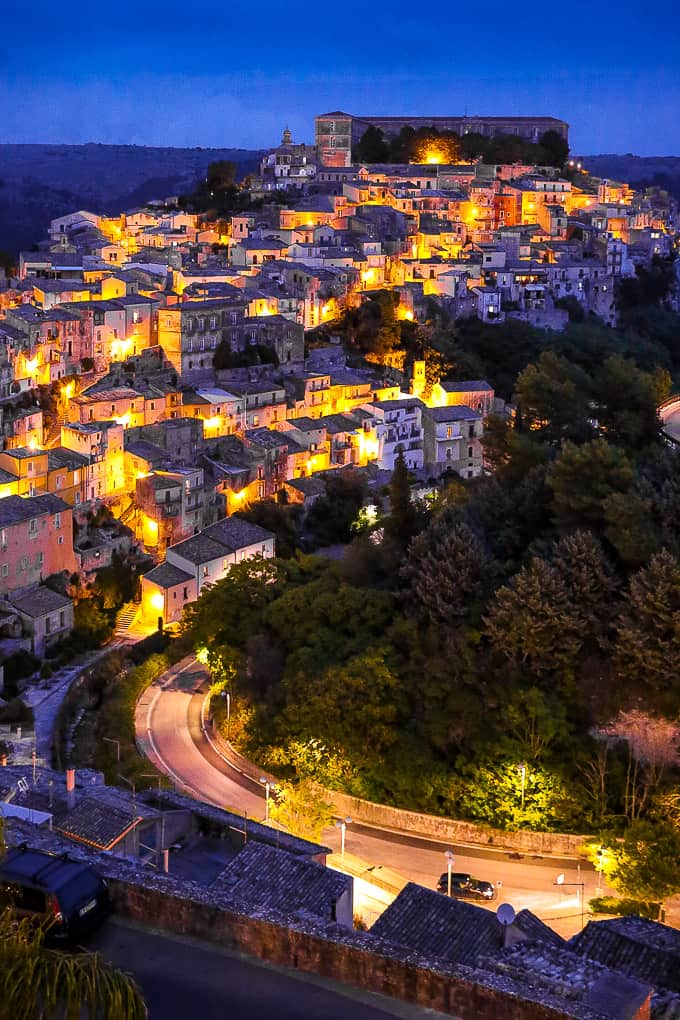 Where to stay in Ragusa

There are 2 options to consider in choosing your hotel in Ragusa.  You can stay either right in Ragusa within walking distance to all the attractions, or you can stay further away, in the Sicilian countryside, and make a day trip or two to Ragusa.

1. Stay in the center of Ragusa

The hotel is located across the street from Ragusa Cathedral.  To get to Ragusa Ibla, just walk down a staircase pathway that connects Ragusa Superiore and Ragusa Ibla.  No need to drive a car. 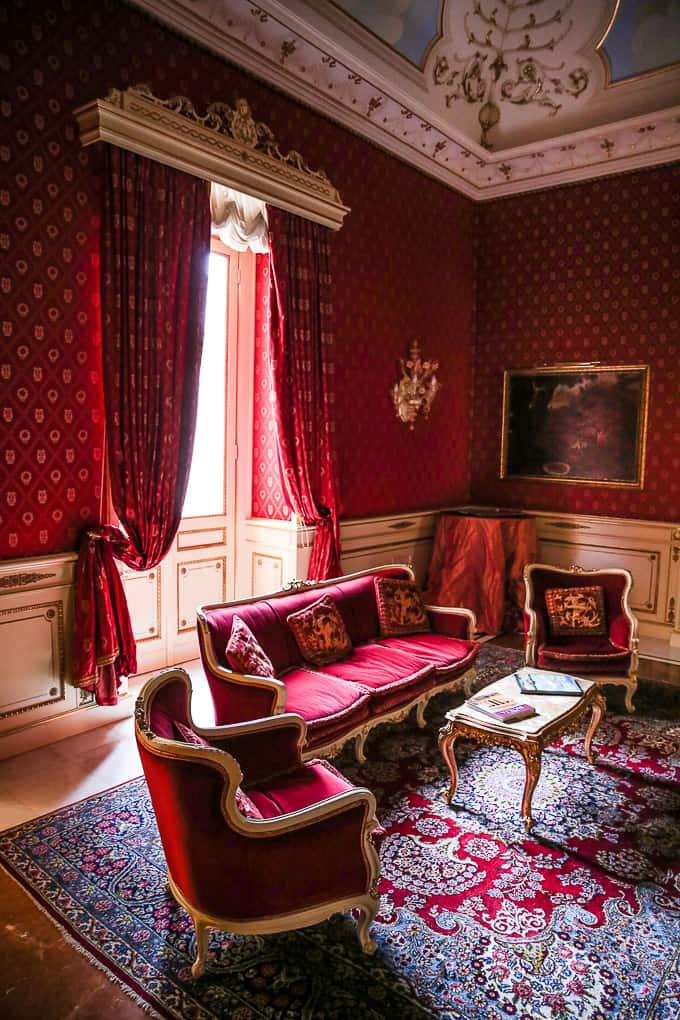 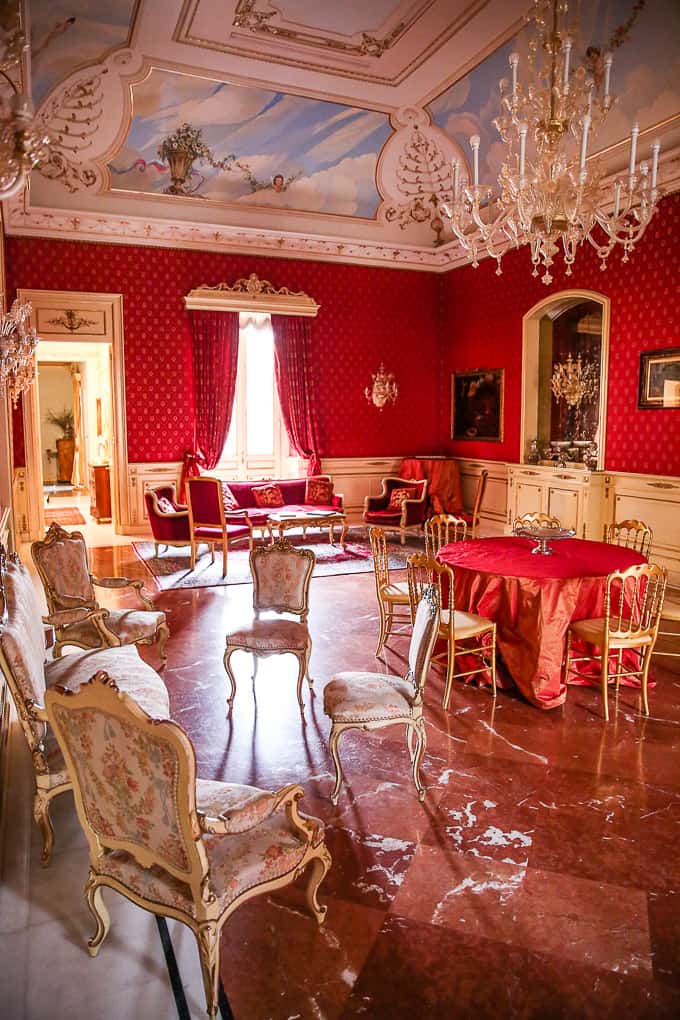 2. Stay in the Sicilian countryside

If you want to stay in a resort-like setting on a vast property in a Sicilian countryside but still be a short car drive away from Ragusa, then stay at Masseria della Volpe.

Masseria della Volpe is a stunning resort in Sicily, Italy. Located in Val di Noto area of Sicily, this hotel is set in the beautiful Sicilian countryside. The location is strategically close to many historical Sicilian cities, such as Noto, Modica, and Ragusa.

« What To See In Castelmola - Hilltop Town Above Taormina, Sicily
10 Best Things To Do in Noto, Sicily »
692 shares