Angkor Thom is an ancient walled city and the last capital of the Khmer empire. Established in the 12th century, Angkor Thom is famous for its many impressive monuments, including the Bayon, the Baphuon, the Terrace of the Elephants, and the spectacular Angkor Thom South Gate. 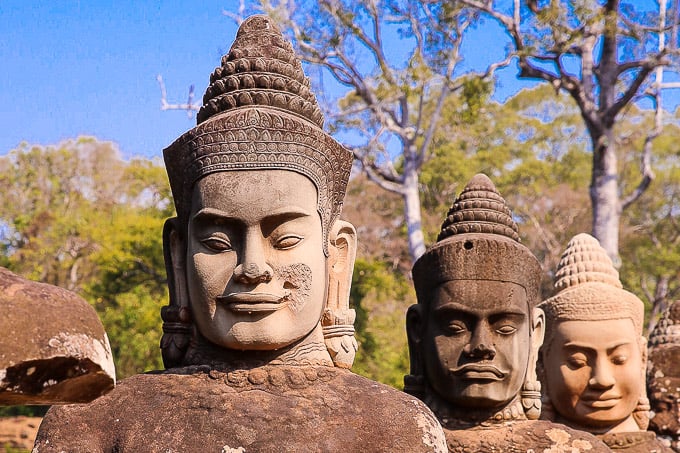 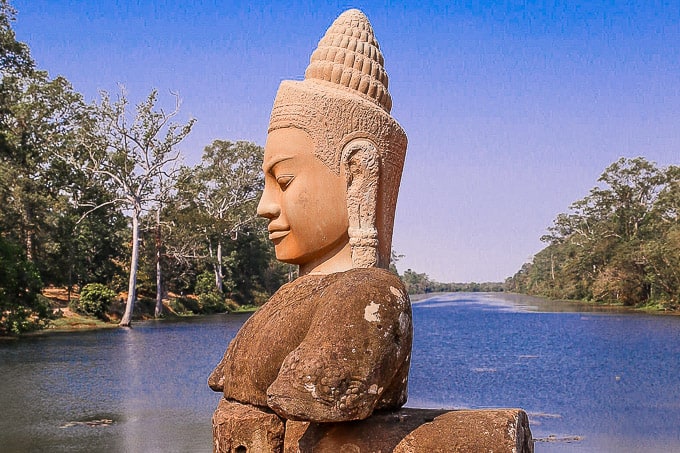 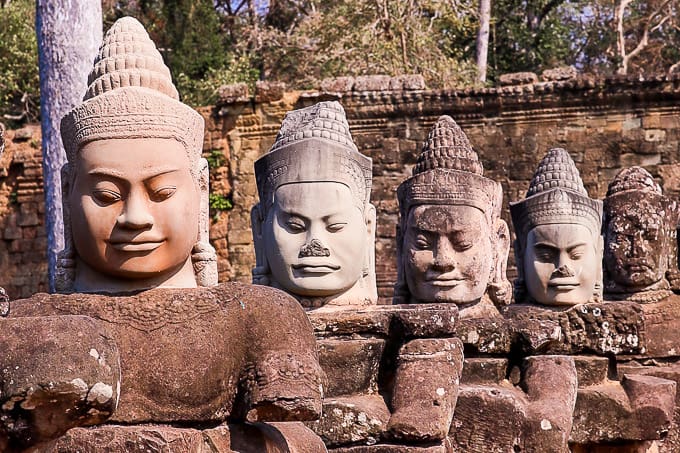 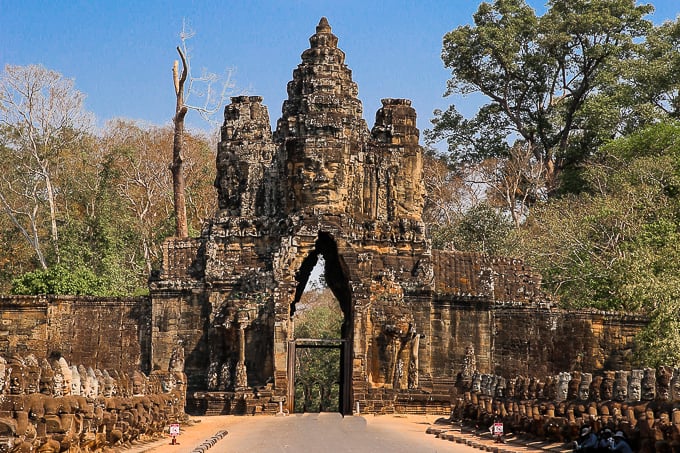 Where is it located?

How big is Angkor Thom?

Angkor Thom is laid out as a square with each side of the square stretching 3 km long.  In total, Angkor Thom covers the area of about 9 square kilometers.

Angkor Thom was established by King Jayavarman VII (a king of the Khmer Empire from 1181 to 1218). 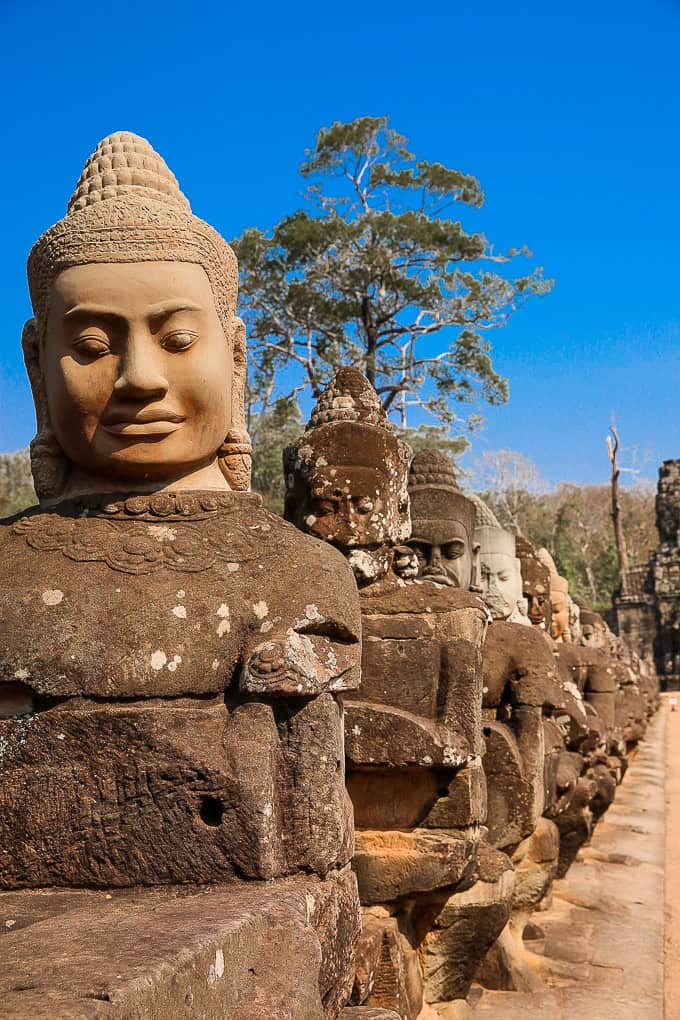 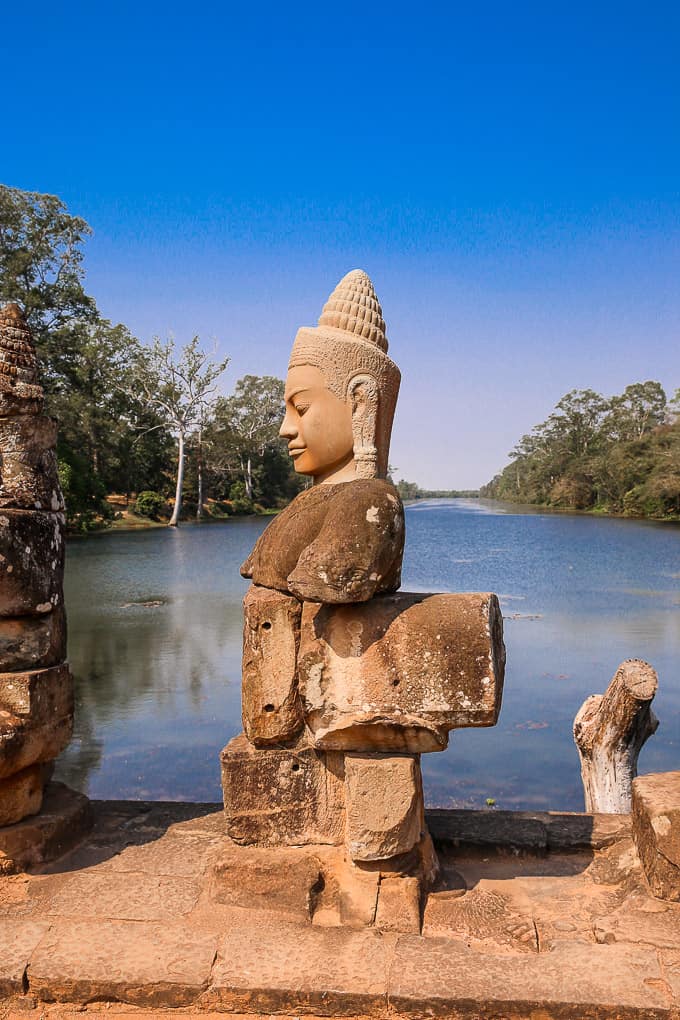 The best-preserved gate of Angkor Thom is the South Gate.  The causeway over the moat to the South Gate is lined with stone figures of mythical beings.

There is a grand entry tower at the South Gate through which you enter the Angkor Thom.  The sandstone tower is about 23 meters high and is topped with faces in four directions. 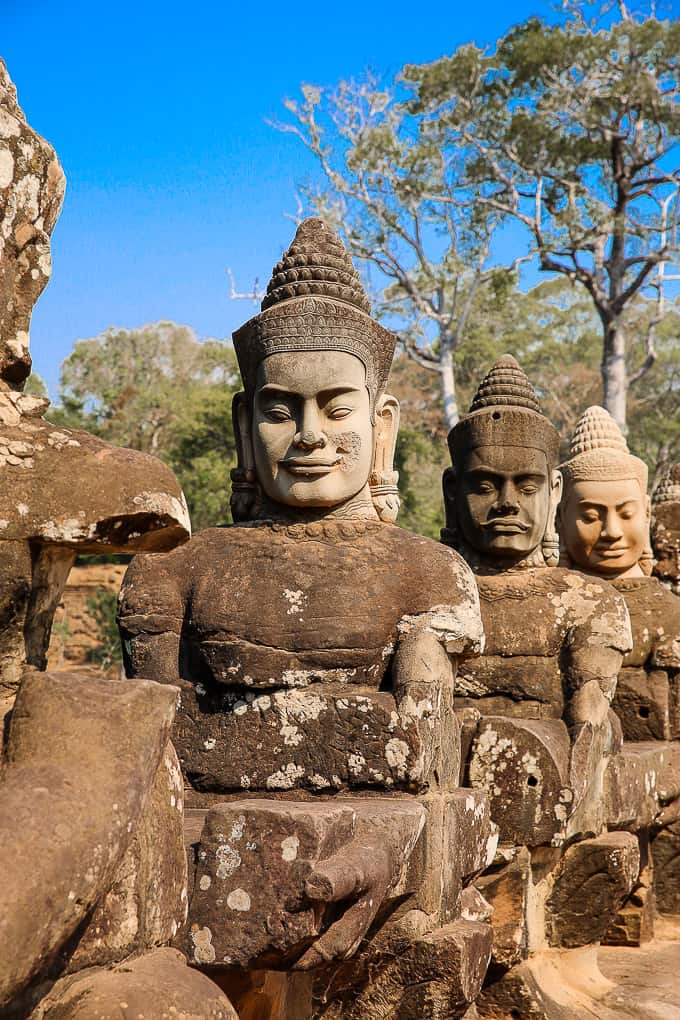 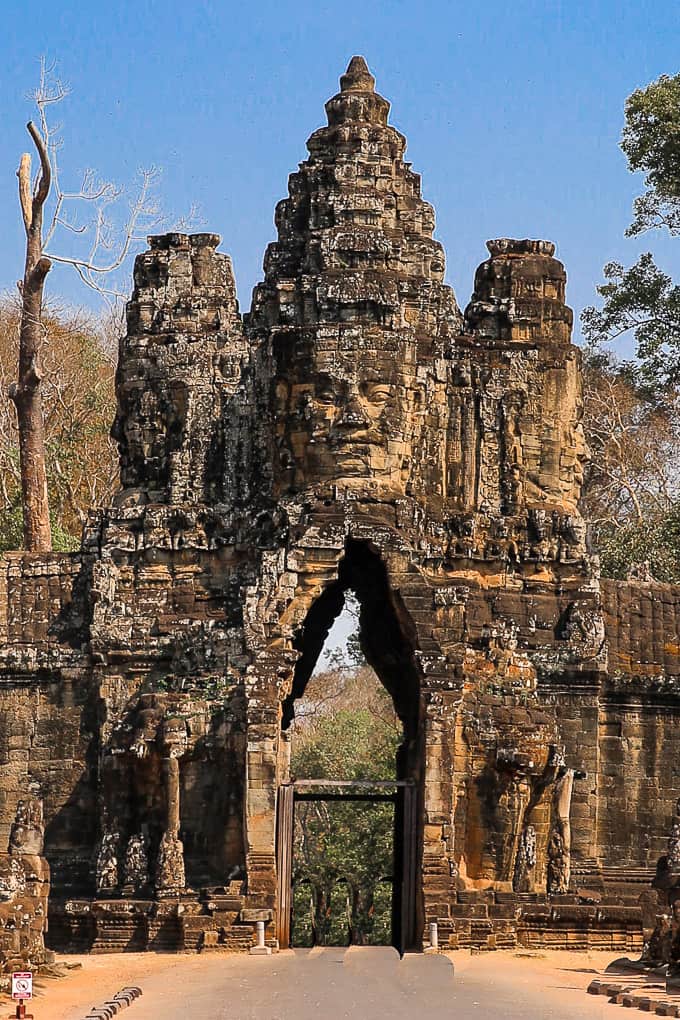 Entry Tower at the South gate of Angkor Thom, Cambodia 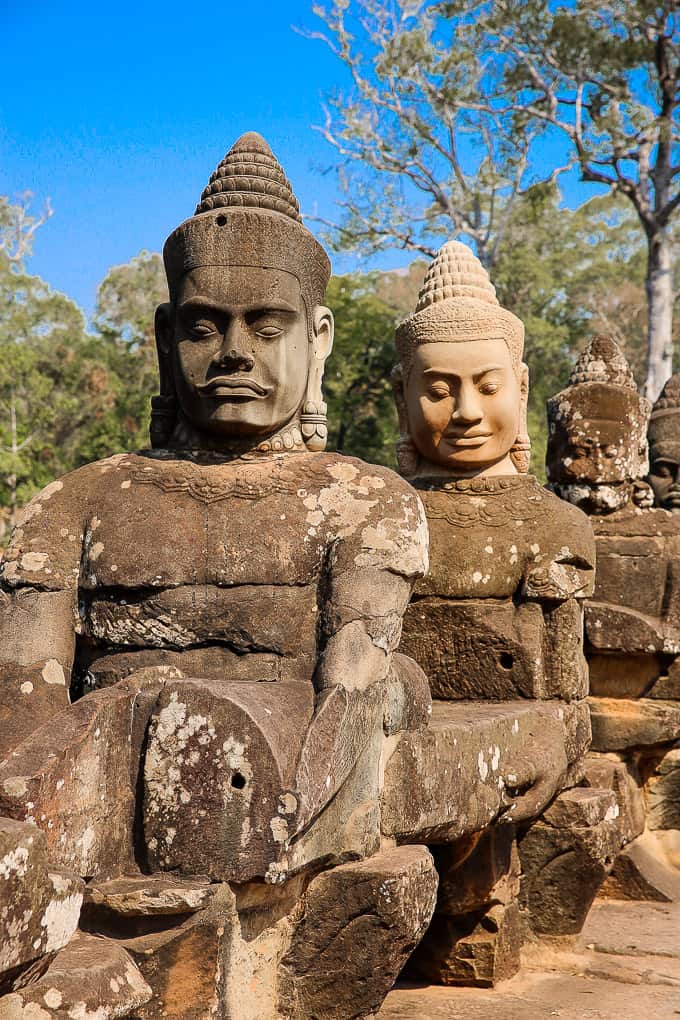 The Bayon is an ancient temple in the center of Angkor Thom, Cambodia.  Bayon was built as the state temple of the King Jayavarman VII, a king of the Khmer Empire from 1181 to 1218. He was strongly devoted to Buddhism and built the Bayon as a result of his devotion.

Bayon was the last temple built at Angkor.  The temple is famous for its smiling faces. 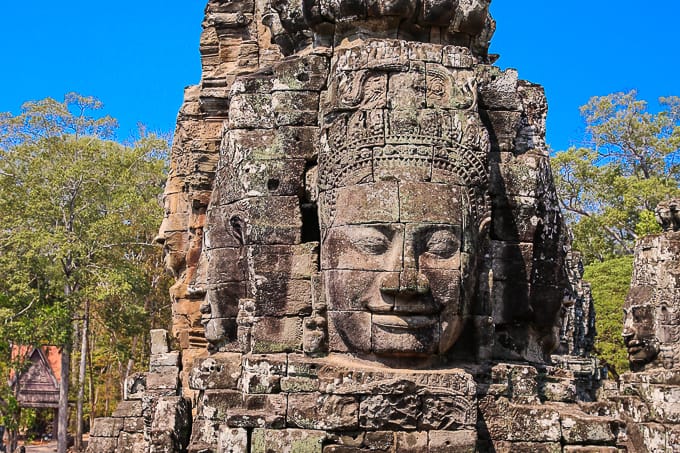 The Baphuon is an 11th-century temple at Angkor, Cambodia. It was initially dedicated to the Hindu God Shiva and served as the state temple of Udayadityavarman II, the ruler of the Angkor Kingdom from 1050 to 1066 A.D.

In the 15th century, the Baphuon was transformed into a Buddhist temple.

The Baphuon was constructed as a three-tiered temple mountain. 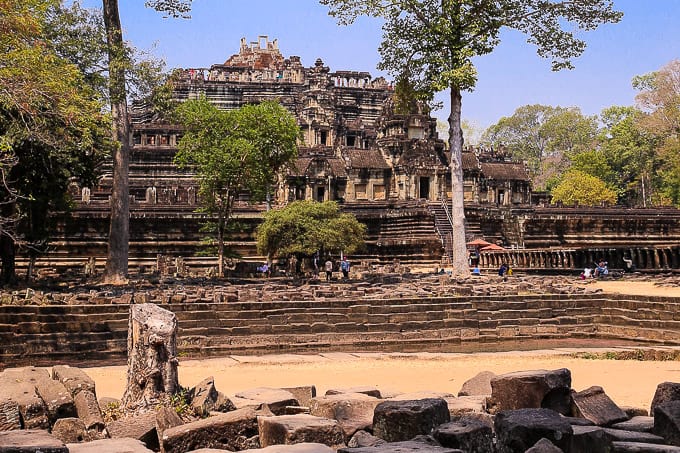 The Terrace of the Elephants

The Terrace of the Elephants is an ancient royal viewing platform of Angkor Thom.  The Terrace faces the public grounds that were used for public ceremonies, military parades, processions, and other events.

The Angkor’s king Jayavarman VII (who was the king of the Khmer Empire from 1181 to 1218) and his family used the Elephant Terrace to watch military parades, public ceremonies, and other events. The king also used the terrace as the audience hall to interact with the public.

What remains now of the original structure is mainly the foundation and the ruins. The walls of the terrace contain the carvings of elephants, other animals, and mythological creatures.  The terrace is over 300 meters long. 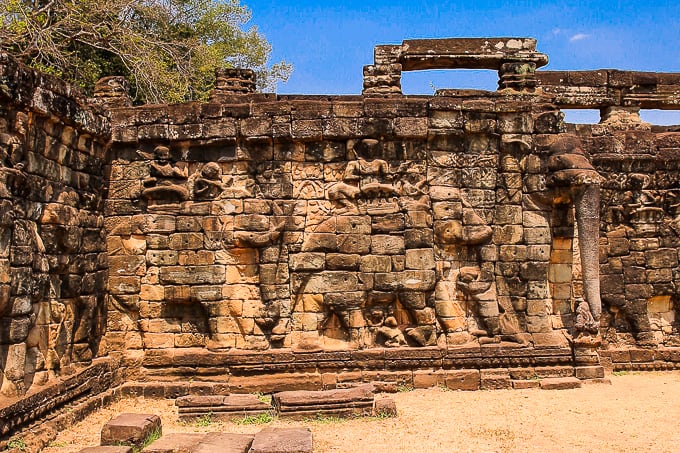