Pumpkin Coconut Soup with Caramelized Pecans – savory pumpkin soup flavored with red curry paste, a small amount of honey, and cumin.  A perfect balance of flavors: Thai flavors combined with pumpkin with caramelized pecans adding a touch of sweetness.  While this soup is quite different in flavor from traditional pumpkin soup, it will still make a great and unique addition to Thanksgiving menu. 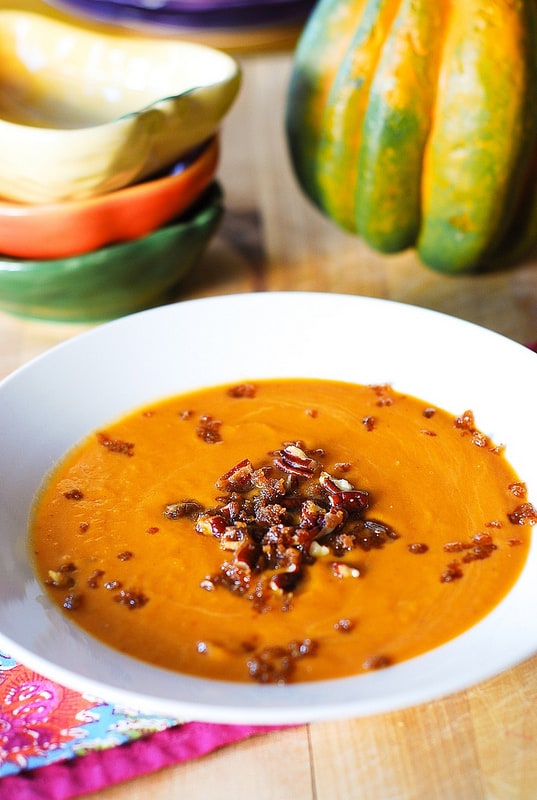 You may have noticed I’ve been posting lots of pumpkin recipes lately, such as pumpkin banana bread with apples or apple pumpkin bundt cake  or pumpkin waffles. And I am not done yet! 🙂 No pumpkin menu is complete without this amazingly delicious and easy pumpkin soup.

I am very particular about pumpkin soups: I like them savory and so that the pumpkin is not the only dominating flavor. Last year, I made this pumpkin and butternut squash soup which fit these 2 criteria and was super tasty – I highly recommend that soup!  Well, this year I wanted something REALLY SIMPLE that did not even involve food processor but only one saucepan, so I came up with this recipe.

In this pumpkin soup recipe I combine pumpkin puree with a little bit of coconut milk, a touch of red curry paste, cumin and honey. The soup does not have a strong overwhelming Thai flavor, neither does it taste too much like a pumpkin. It’s just perfectly balanced. I use honey not to sweeten the soup but only to balance out other flavors. Even with the honey added, the soup is not sweet, the honey is just used to balance out the slight acidity of pumpkin. 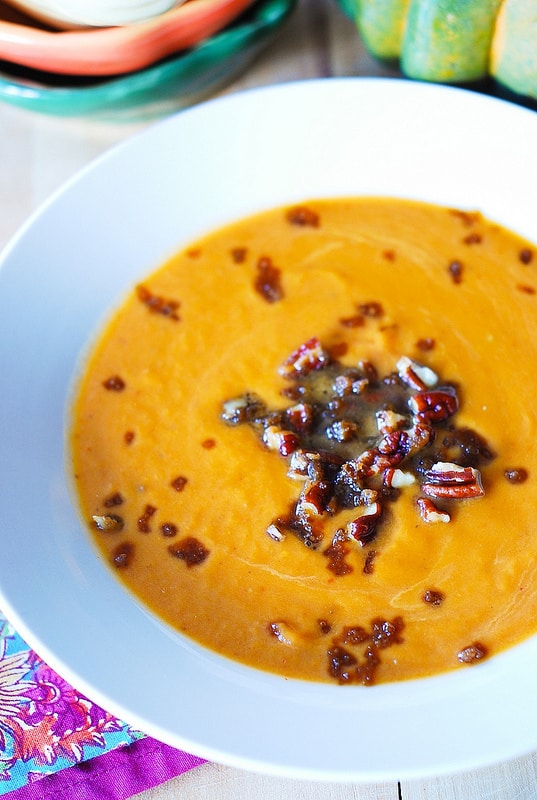 This soup is highly nutritious (thanks to pumpkin) and gluten-free.

I like to sprinkle the soup with chopped pecans caramelized in brown sugar. It makes the soup pretty and even more fit for Thanksgiving. It also adds these tasty chunks of sweetness (little islands of sweetness :)) to the mostly savory soup!

If you are vegan: I do use butter to caramelize the nuts, so if you’re vegan, make sure either to sprinkle the soup with plain, non-caramelized, pecans or use alternative, vegan-friendly way to caramelize them. 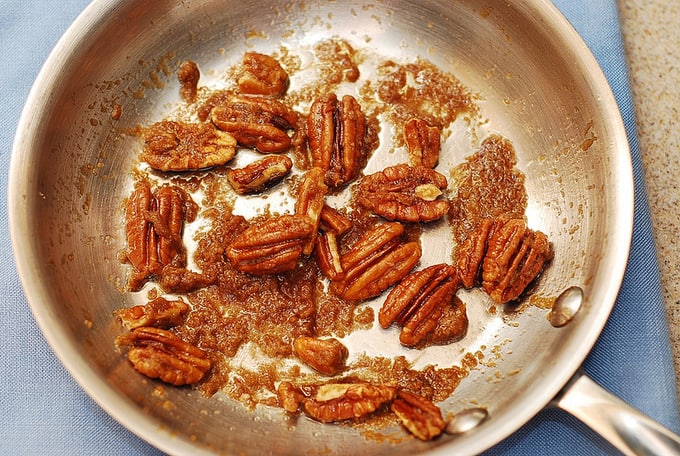 This soup has so many great qualities that I just fall in love with it over and over, each time I make it! It’s so tasty, without Thai or pumpkin flavors overwhelming one another; it’s healthy; it’s super easy to make; and it looks so festive! Fit for everyday and for holidays, too! 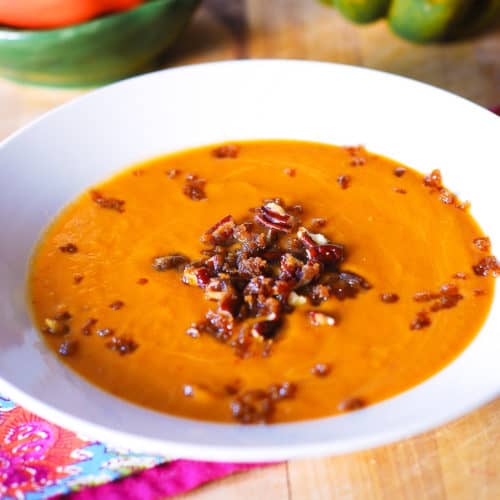