How do you cook steak without a grill? You can sear it on the stove top and then finish it under the broiler in the oven. Just like in this recipe: Pan-Seared Fillet Mignon Steak with Red Wine Mushroom Sauce. 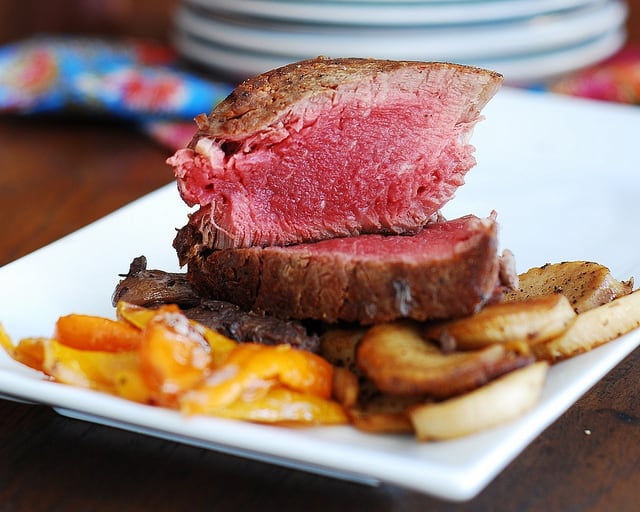 This was a very special dinner. A couple of days ago my husband opened a really good bottle of red Bordeaux wine, and we had to have filet mignon steak with it. There aren't many main courses out there that go with a fine red Bordeaux better then prime steak.   I had a couple of filet mignon steaks in the freezer for a while ( a story similar to Pistachio Crusted Rack of Lamb) - a perfect choice of meat for a fine bottle of wine. We actually don't eat much red meat in our family, but when we do, it's better be really high quality. 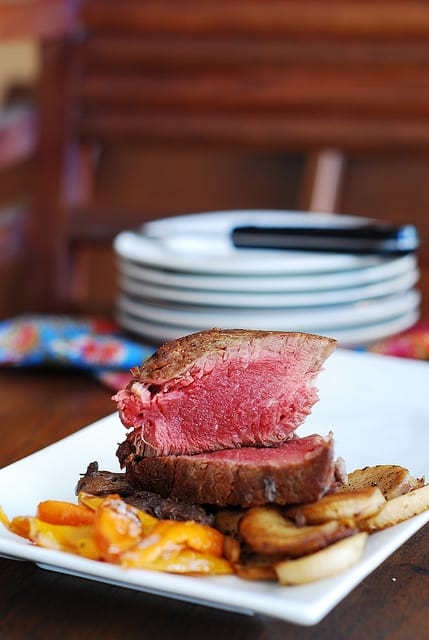 Then, I realized that our grill has not been fixed yet, so I was going to cook steak on the stove, then in the oven. I've done it before, and you can actually prepare a perfect steak (rare or medium-rare) without a grill. In fact, when using prime filet mignon steak, I almost prefer to do it in house, because I want the least amount of flavors to interfere with meat. I don't want any extra smokiness from the grill, and I use only basic seasoning: salt, pepper and olive oil. That way, what you taste is the fine piece of meat, and not the spices. I pan-seared the steaks on the stove top and then broiled them in the oven. 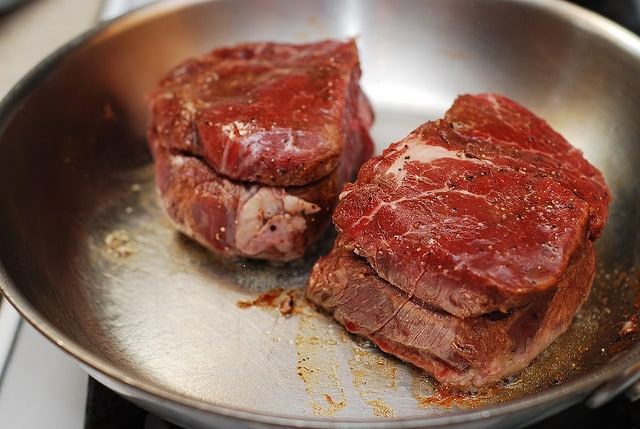 I LOVE to prepare steak "the French way" - with a nice, rich, or creamy sauce on the side. For this recipe, I served pan-seared fillet mignon steak with red wine mushroom sauce with cream: 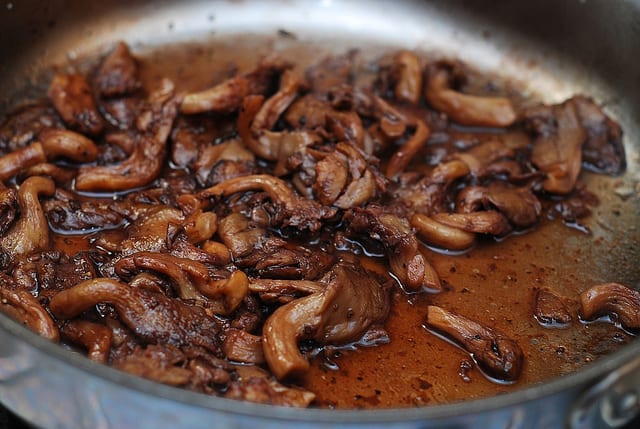 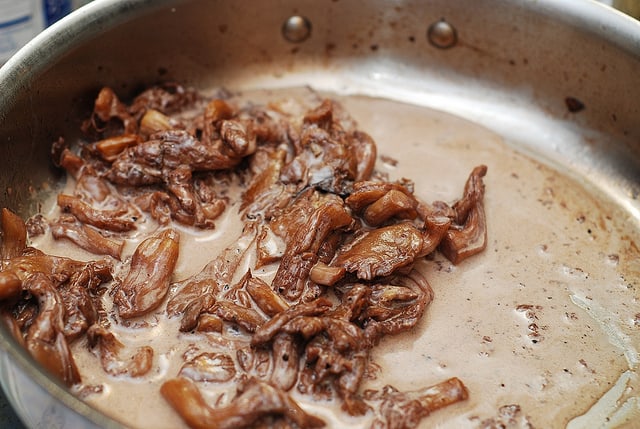 I happened to have a whole bunch of different kinds of mushrooms that my husband picked up at the Asian market. So, I just had to make a creamy mushroom and wine based sauce to accompany the steak! I love to stew various types of mushrooms in wine and discover different flavors for each mushroom type. 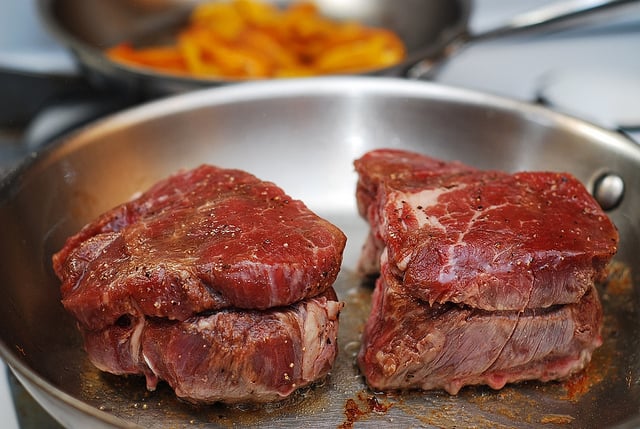 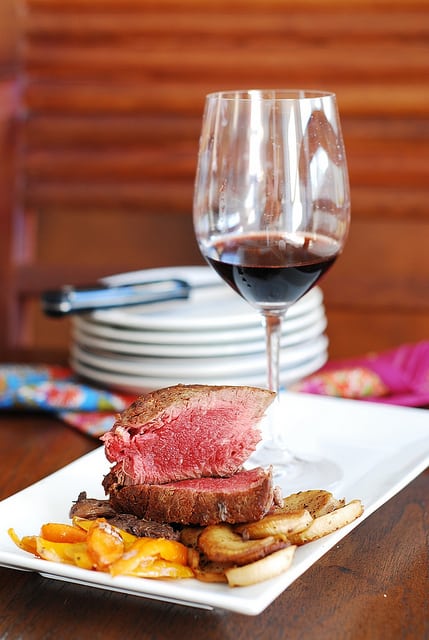 To cook filet mignon steak successfully on the stove is easy, but it does require some practice, just like it requires practice to grill the steak just right.

Method that I use below requires first pan frying the steak and then cooking it in the oven. I will describe below exactly how I cooked my steak on the stove, but because all stove tops and ovens are different, yours might require more or less time to reach the desired doneness (rare, medium-rare, etc. ). You'll just have to watch your steak carefully. I think the pan frying method works great for thicker cuts, such as filet mignon (the ones on the photo were almost 2 inches thick). So, for any cuts like these, which are 1.5" thick or more, this is a great, fail-proof method.

Definitely serve this pan-seared steak with red wine mushroom sauce.   There is nothing better than a good steak with some creamy sauce to accompany it.  Other side dishes could be mashed potatoes or veggies.  For instance, for this dinner I cooked some abalone mushrooms and bell peppers - I just pan-seared them in olive oil, salt and pepper in a skillet.  Something easy like that.  If you want to do the same, I am describing my method for cooking abalone mushrooms and bell peppers below.

How to cook abalone mushrooms:

1) Slice abalone mushrooms thinly like you would slice potatoes.

2) Heat olive oil in a frying pan. Add mushrooms, season generously with salt and pepper, and cook 4 minutes on each side on high or medium until nice golden crust forms. 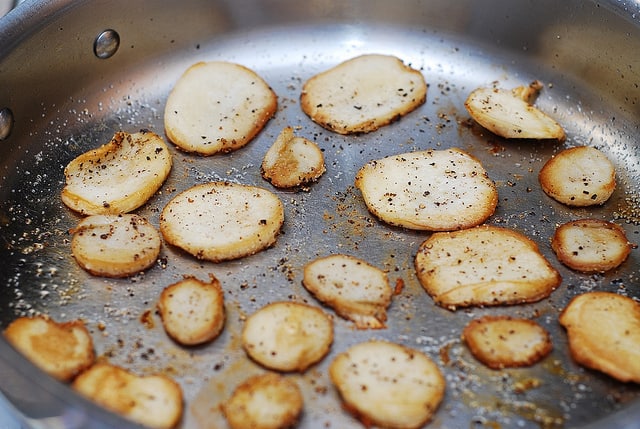 How to cook bell peppers:

1) Similarly to abalone mushrooms, heat olive oil in a frying pan, add sliced bell peppers. Cook them on high-medium heat for about 8 minutes, turning once, until they look roasted. 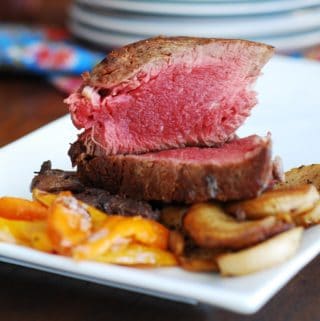 How do you cook steak without a grill?  You can pan sear it on the stove top and then finish it under the broiler in the oven.  Just like in this recipe: Pan-Seared Fillet Mignon Steak with Red Wine Mushroom Sauce.
Print Recipe Pin Recipe
Prep Time 10 mins
Cook Time 20 mins
Total Time 25 mins
Course Main Course
Cuisine American
Servings 2 people
Author: Julia

Tried this recipe?Be sure to leave a comment and provide a Star Rating below - I love your feedback and try to respond to every comment!
« Plum and Apple Puff Pastry Tart
Pumpkin Puff Pastry Tart with Apple-Cranberry Stuffed Crust »
3.2K shares