New York City is one of the most beautifully and skillfully decorated cities around Christmas and New Year's Eve.  Spending some time in December in New York is a great way to get into the holiday mood. Discover the Top Things To Do in NYC in December! 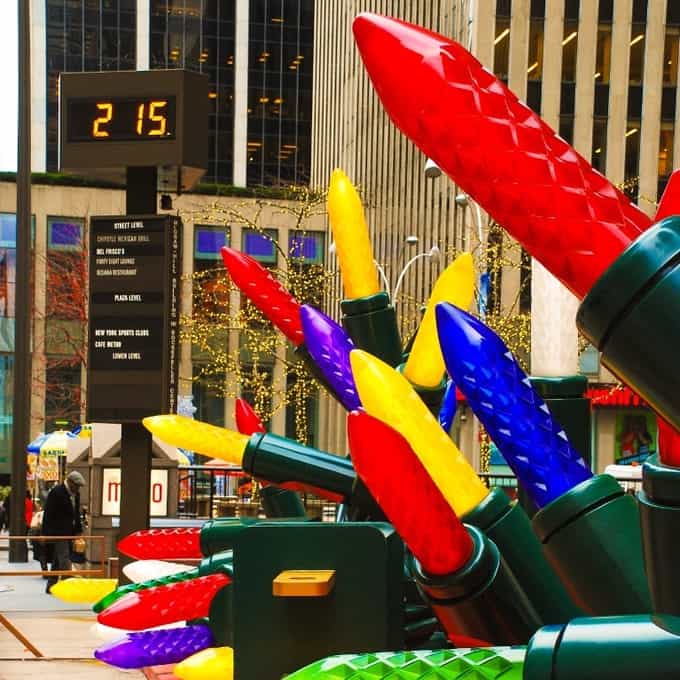 Things to do in NYC in December

New York City is one of the most fun cities in the world during the holiday season. The activities abound, the whole city gets decorated with holiday lights, Christmas decorations, and intricate window displays.

Spending holidays in NYC can get expensive, but there are SO MANY fun free things to do (and to see!) in New York City in December.   And, that's what this post is all about.  Here is my list of Top 10 Things To Do in NYC during the winter holiday season: 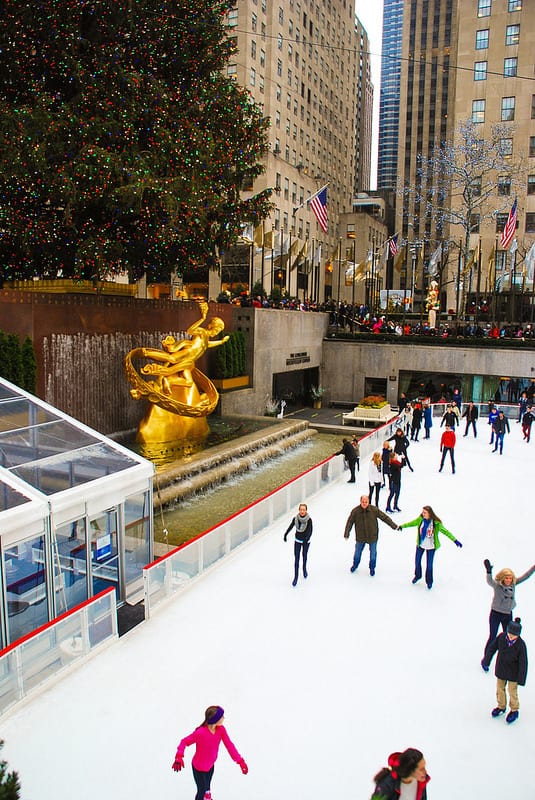 10 Things To Do in NYC in December

Giant red ornaments at 1251 Sixth Avenue, near Rockefeller Plaza in NYC are a spectacular sight.   If you let your imagination run wild, these Christmas ornaments will remind you of huge caramelized apples or gigantic pomegranates, quite appropriately for the season!  Very shiny and deliciously looking, aren't they? 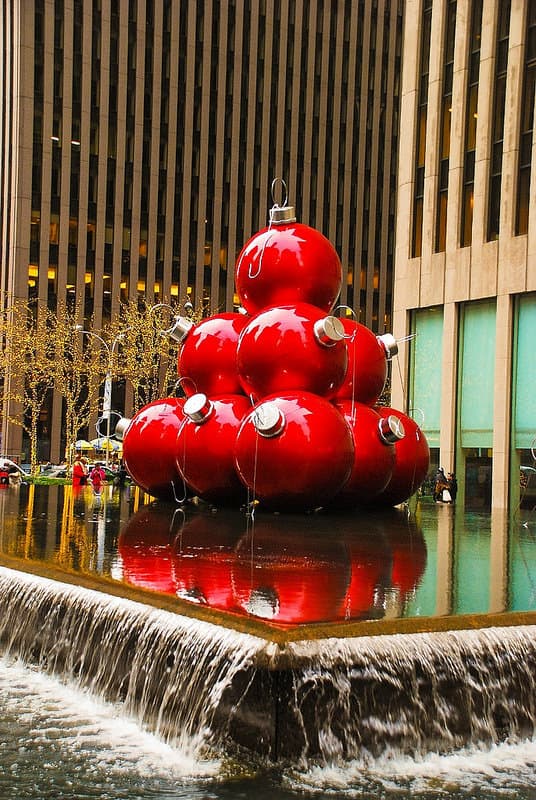 When visiting NYC in December, be sure not to miss the gigantic Christmas lights on 6th Avenue. They look like huge lipsticks of different colors or rockets ready to launch, don't they? 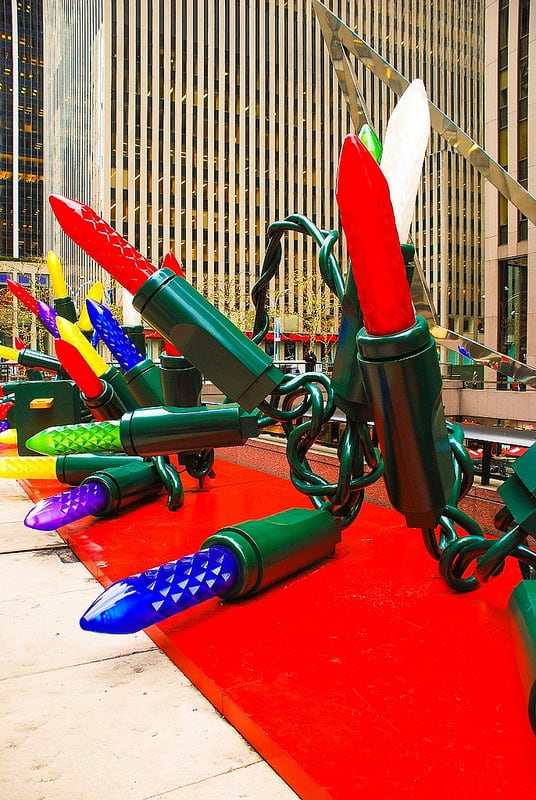 There are beautiful lights everywhere in midtown Manhattan: 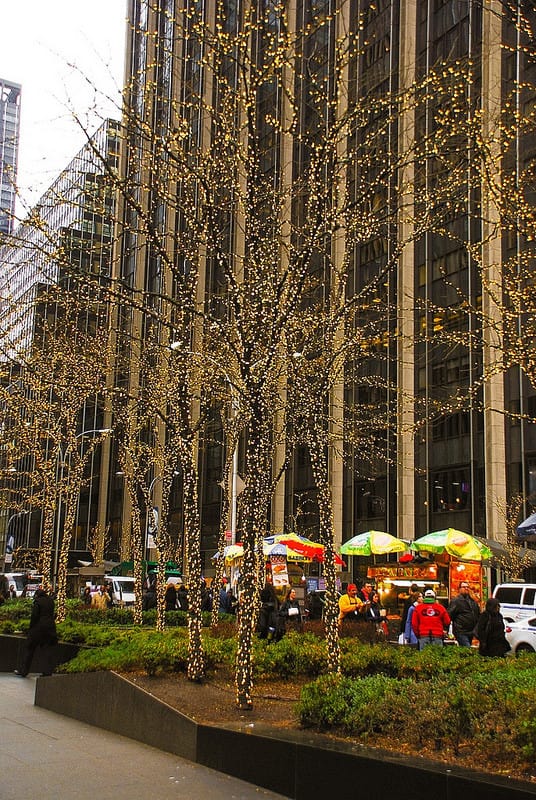 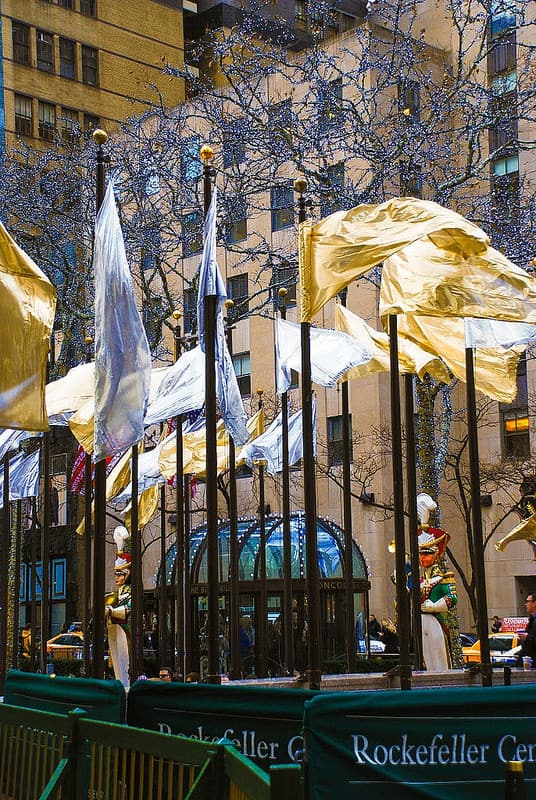 Rockefeller Center is one of the main attractions in NYC.  Especially in the winter.  It is home to the iconic Christmas Tree, that's over 70 feet tall this year. 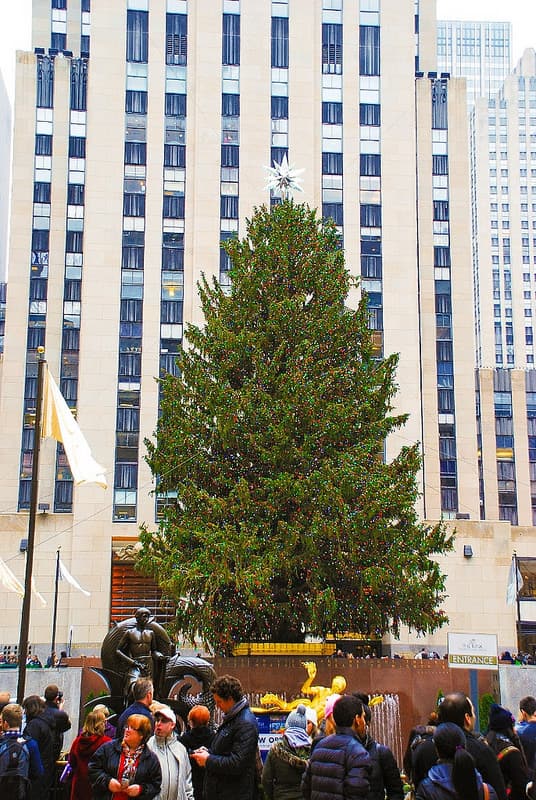 The tree is placed right in front of the Rockefeller building. 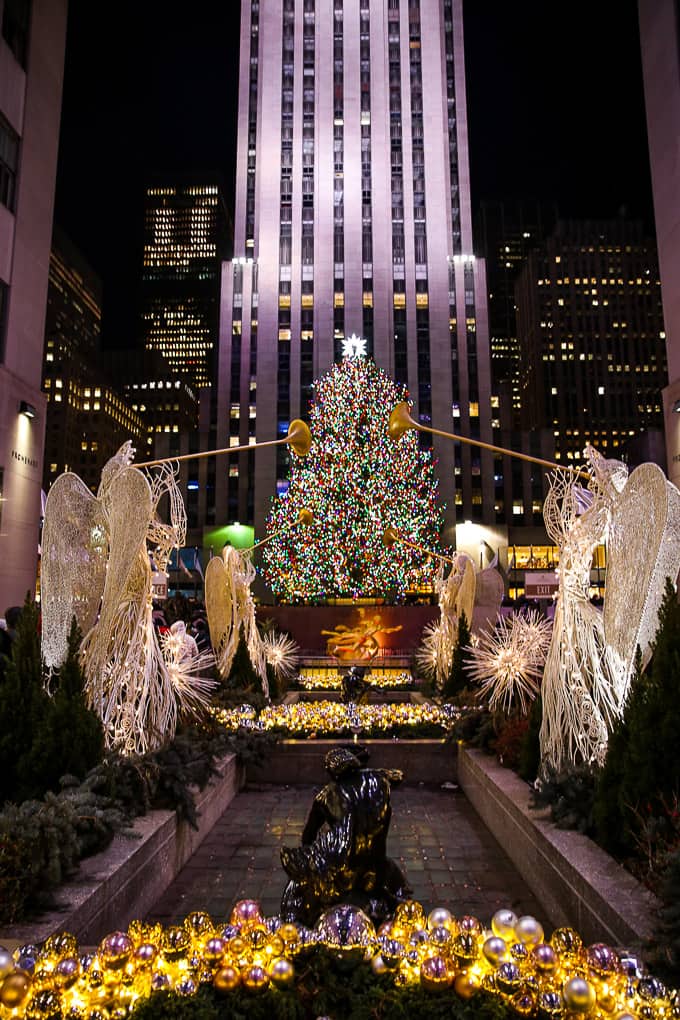 This iconic NYC Christmas tree is topped with the Swarovski star topper composed of multiple precision-cut crystals.    A replica of the Swarovski star is also on display in the Rockefeller Center - and you can see all the intricate detail, crystals and facets up-close, which is pretty cool: 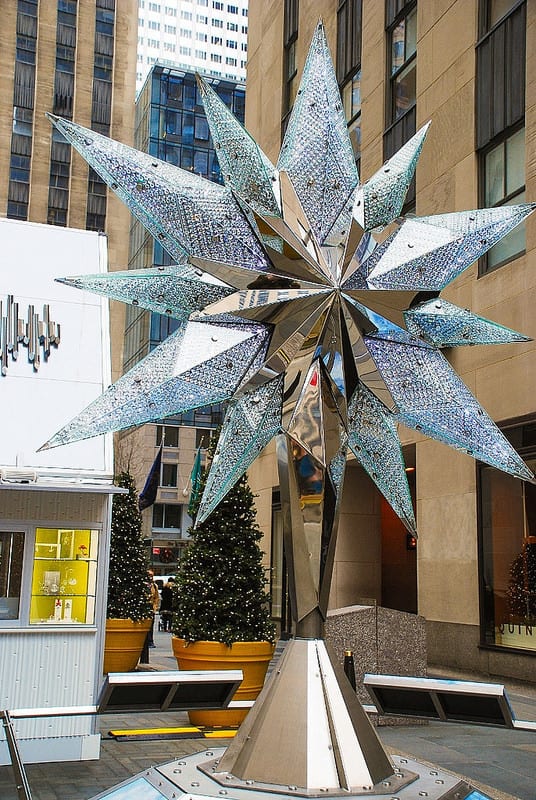 A little further, you can see a famous bronze statue of Atlas in front of Rockefeller Center. In Greek mythology, Atlas was forced by Zeus to hold up the heavens as a special punishment - as we can see on this photo: 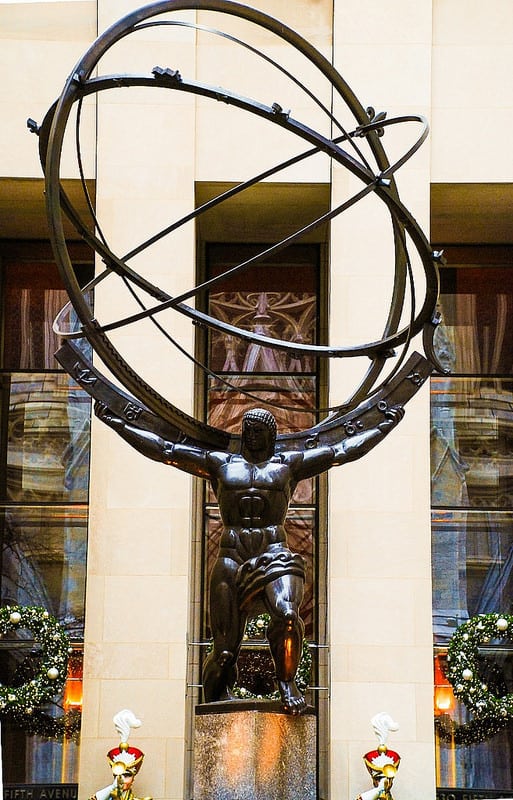 3. The Rink at Rockefeller Center

One of the most world-famous ice rinks is located right at the Rockefeller Center.  Constructed in the 1930's, the ice rink is very popular with tourists and visitors.  If you are in NYC in December, be sure to walk by the Rockefeller Center and watch the people skate on this spectacular rink. 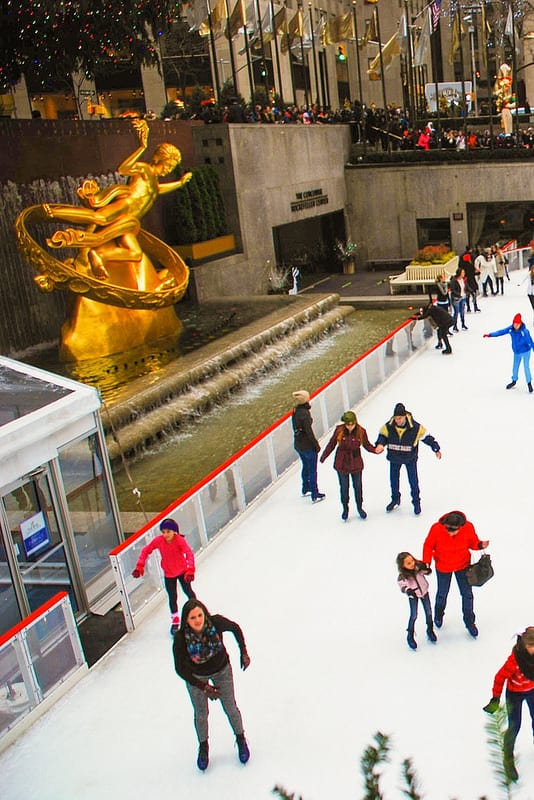 This skating rink is right underneath the Christmas tree and the bronze gilded statue of Prometheus. 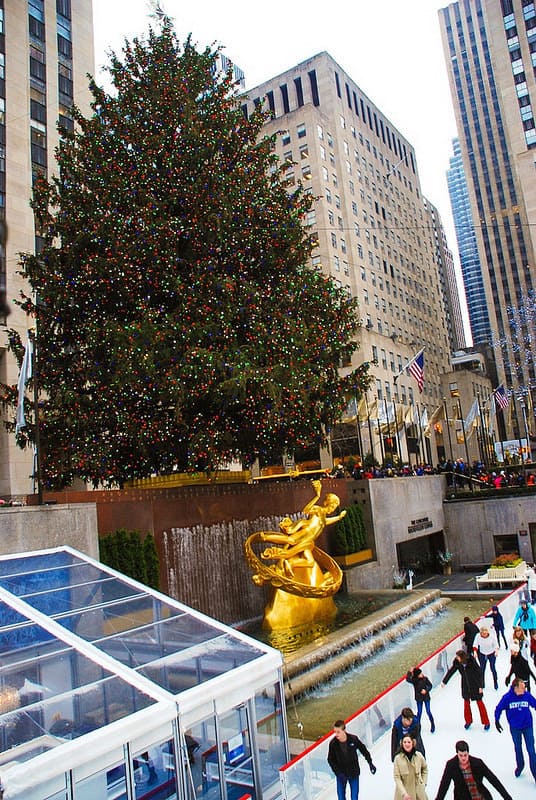 A little further from the Christmas tree, there is a cute alley decorated with the wire-sculpted angel figures.  Each herald angel holds six-foot-long brass trumpet: 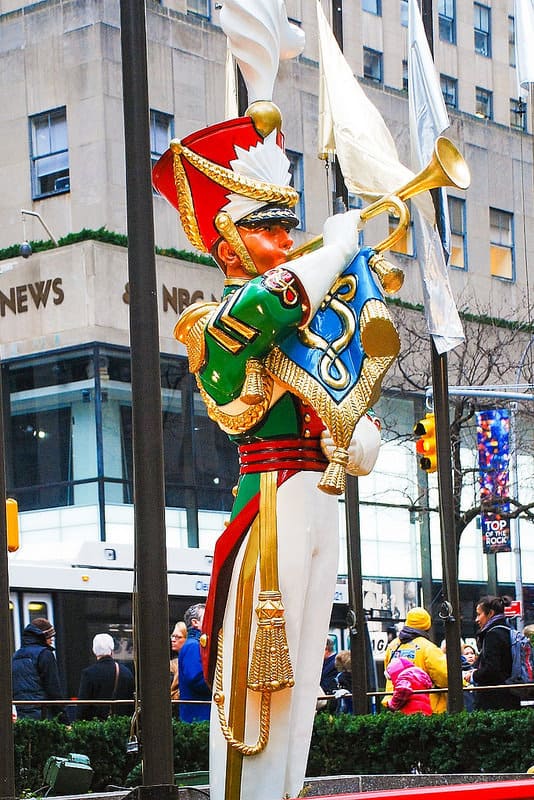 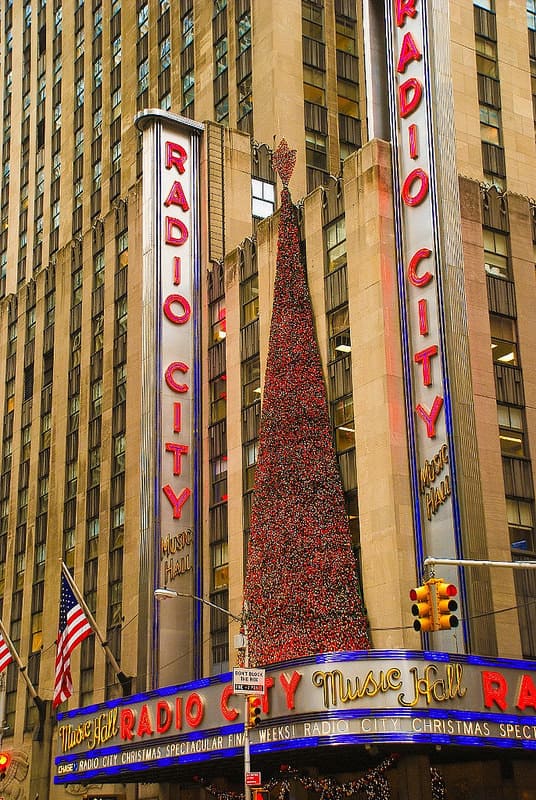 The front of the music hall is decorated with a huge Christmas tree that constantly changes colors. 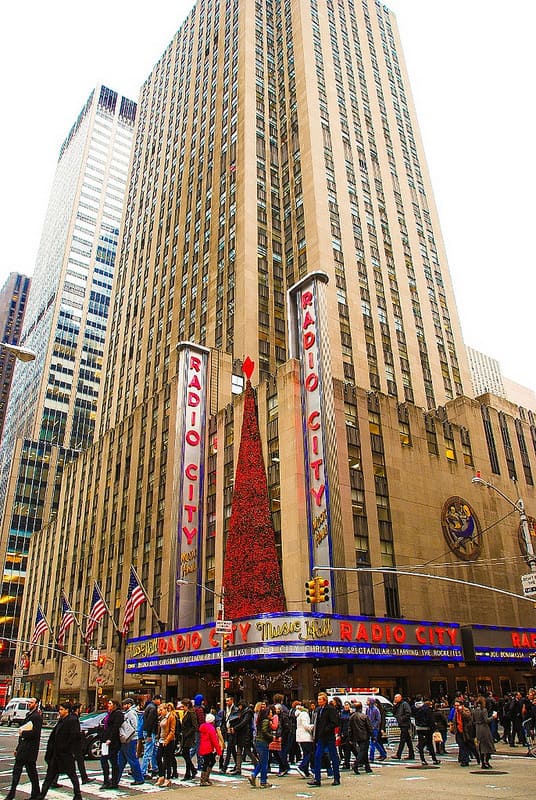 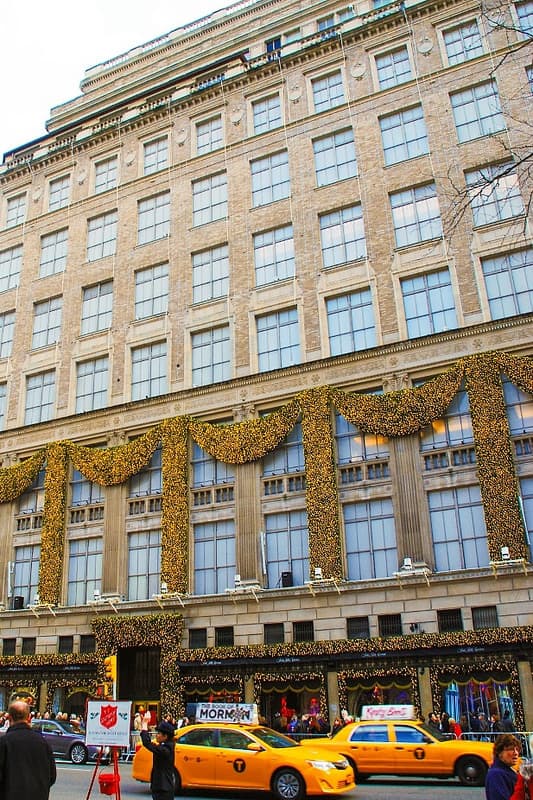 6. Strolling along 5th avenue from the Rockefeller Center towards Central Park

Take a stroll from the Rockefeller Center towards Central Park, along the 5th avenue and you'll see many beautifully decorated buildings and displays in December. This is how the world's premier jeweler Tiffany & Co. is decorated during the holiday season: 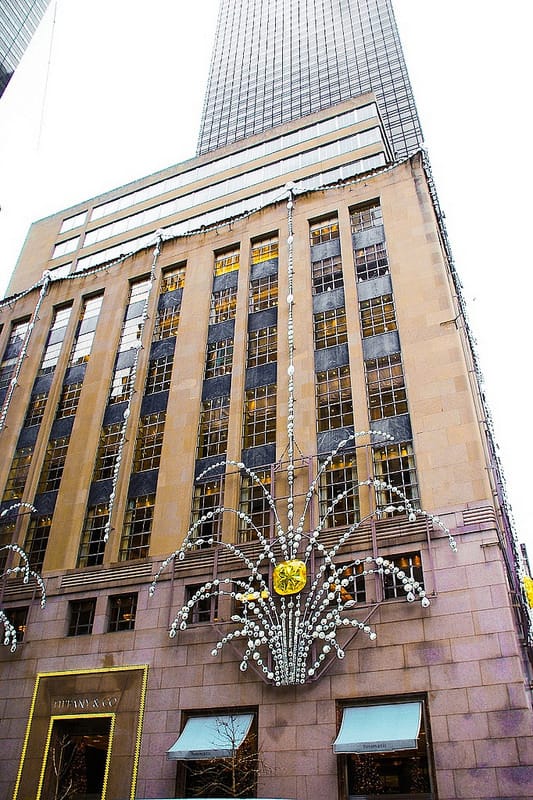 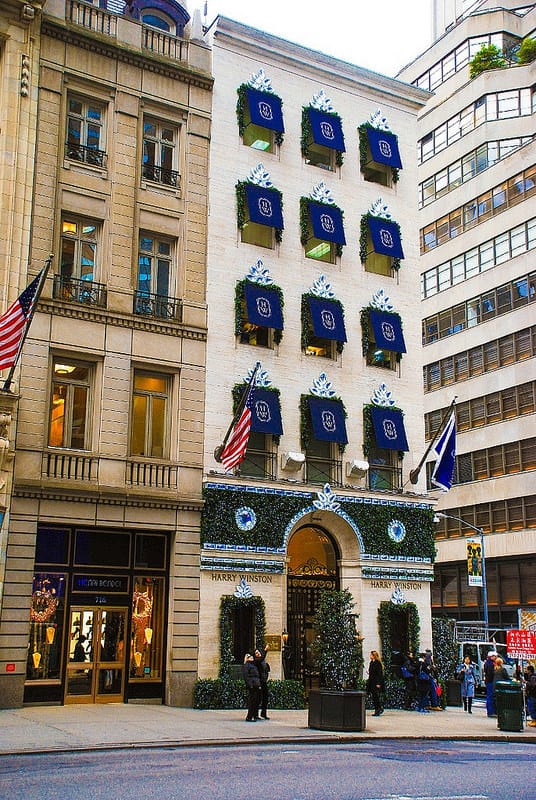 As you continue walking along Fifth Avenue from the Rockefeller Center towards Central Park, you will see a giant snowflake above the intersection of 5th Avenue and 57th street. This snowflake is known as UNICEF snowflake, and it's a beautifully illuminated crystal ornament that lights up the Fifth Avenue at night. 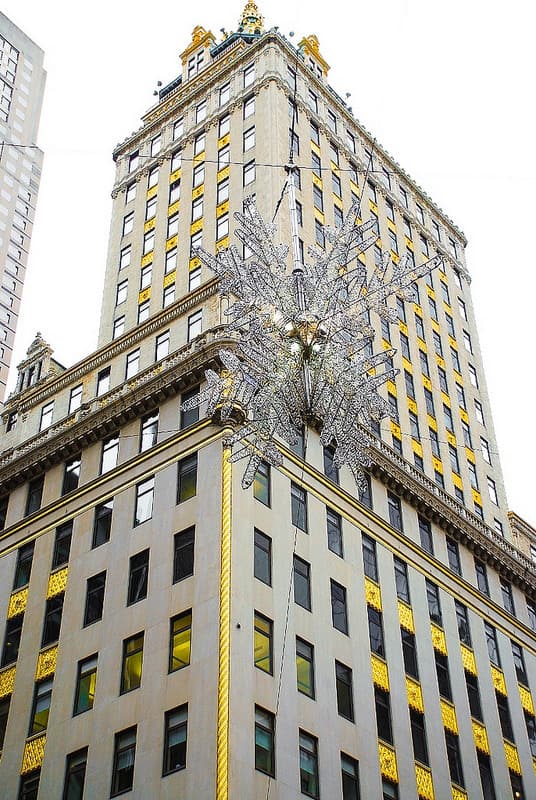 And here is the World's largest Hanukkah Menorah.  It's a 32-foot-high, gold-colored, 4,000-pound steel structure at Grand Army Plaza. It's located on Fifth Avenue and West 59th Street, across the street from The Plaza hotel. 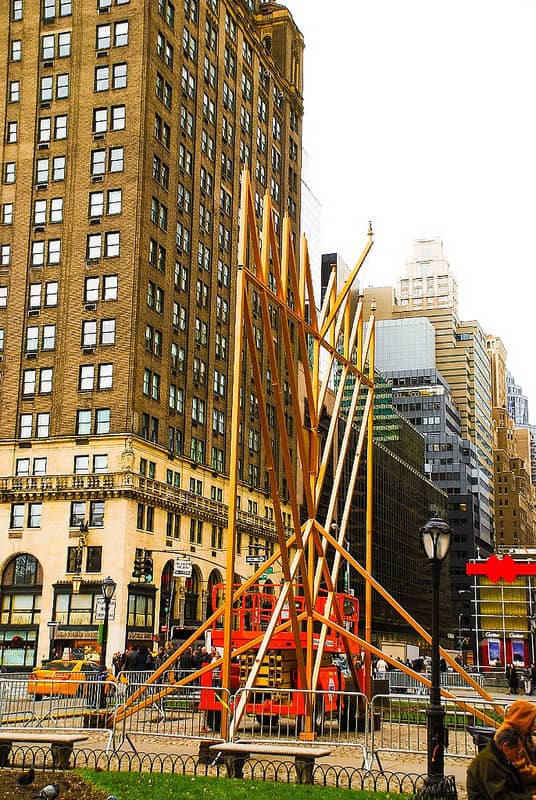 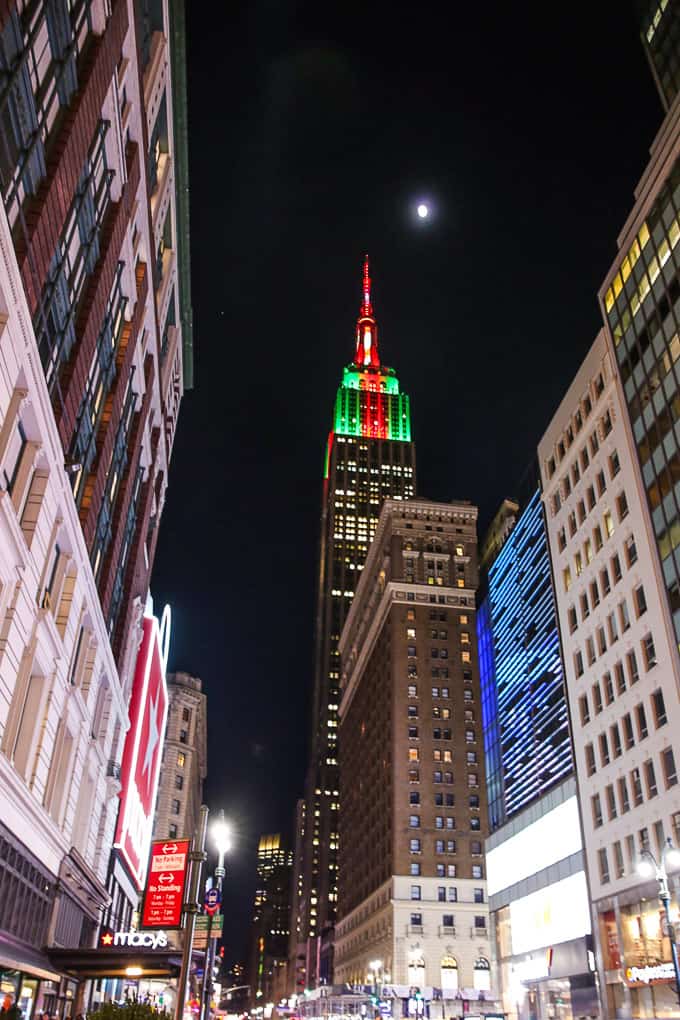 Right by where the Central Park starts at the 5th avenue, you can see The Plaza Hotel, an iconic century-old luxury hotel. 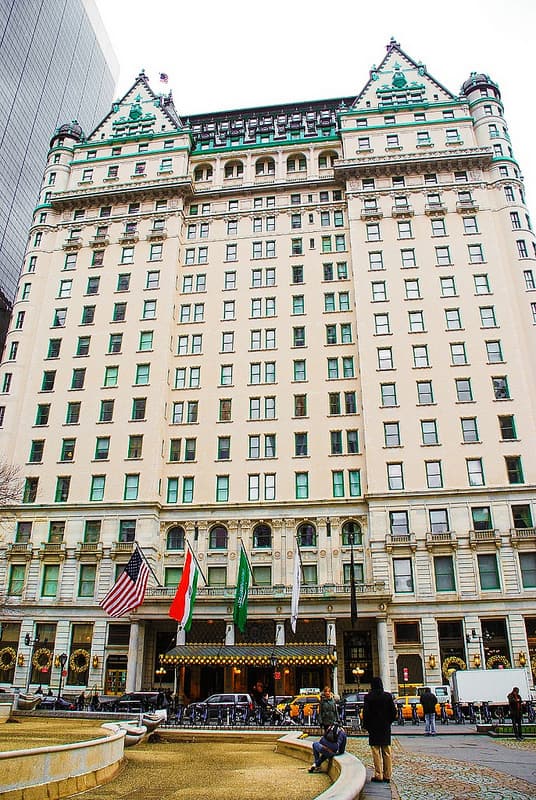 Right next to the Plaza hotel, is the Pulitzer Fountain in Grand Army Plaza. During the winter holiday season, the basin of the fountain is decorated with lighted trees. 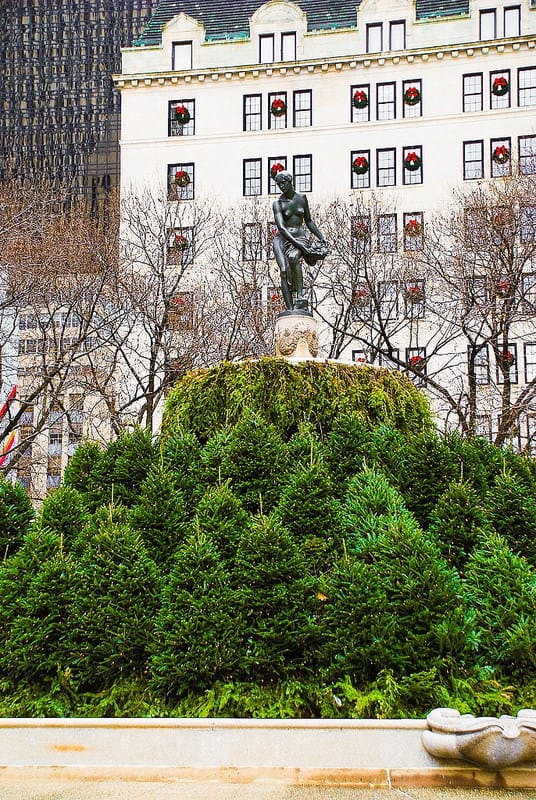 Extra Things To Do in NYC in December

If you are not tired after walking along Fifth Avenue, visiting the Rockefeller Plaza, and watching stunning holiday windows displays, here are some more things to do in NYC in December!

Saint Patrick's Cathedral is another popular attraction in NYC that attracts millions of people each year. 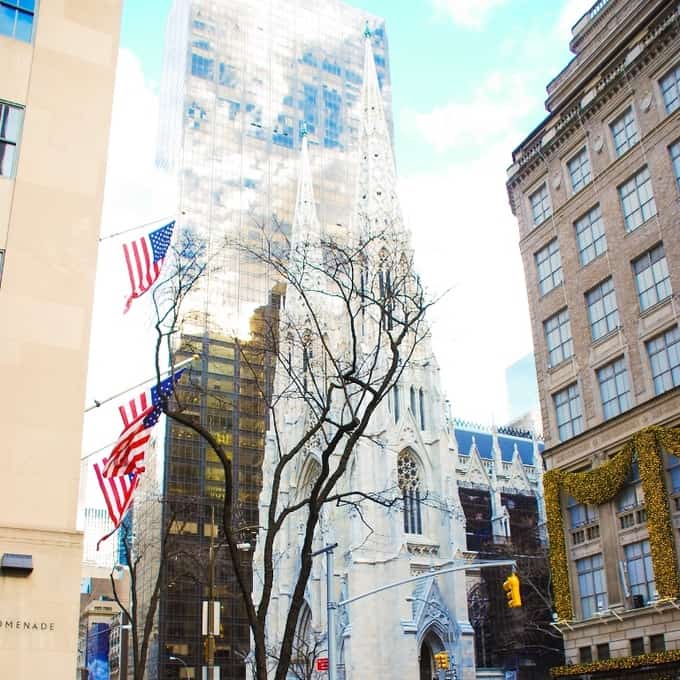 2. The Frick Collection Museum and The Metropolitan Museum of Art

There are many amazing art museums in NYC. If you're cold or tired from walking, visit The Frick Collection Museum and The Metropolitan Museum of Art.

Across from the Plaza Hotel, is an iconic Apple Store glass cube on Fifth Avenue. This Apple retail location is open 24 hours a day, 365 days a year. 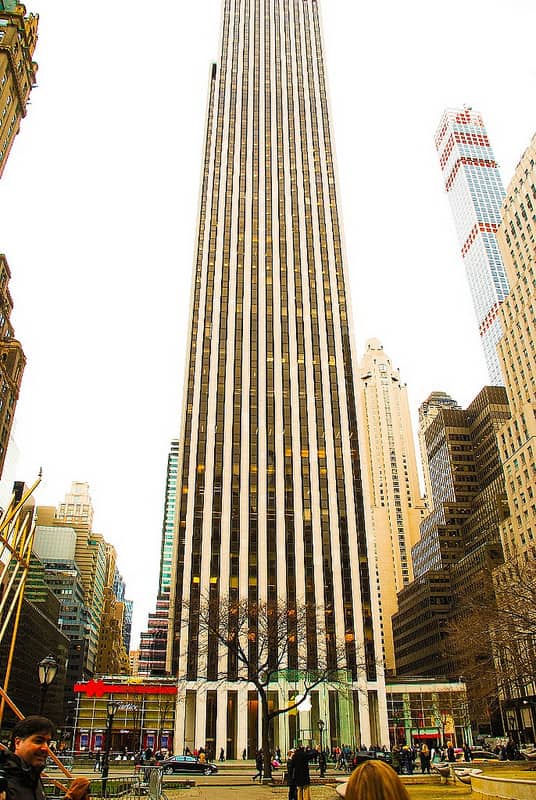 New York City turns into a magical place in December. The buildings get decorated, the city is beautifully lit, and walking in Manhattan becomes an experience in itself. The city looks joyful and stunning both during the day and at night in December. 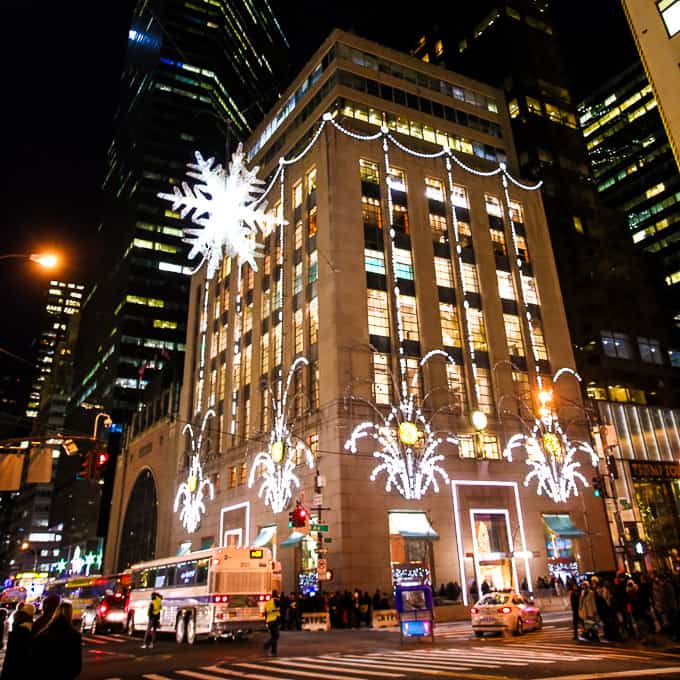 Manhattan at night in December 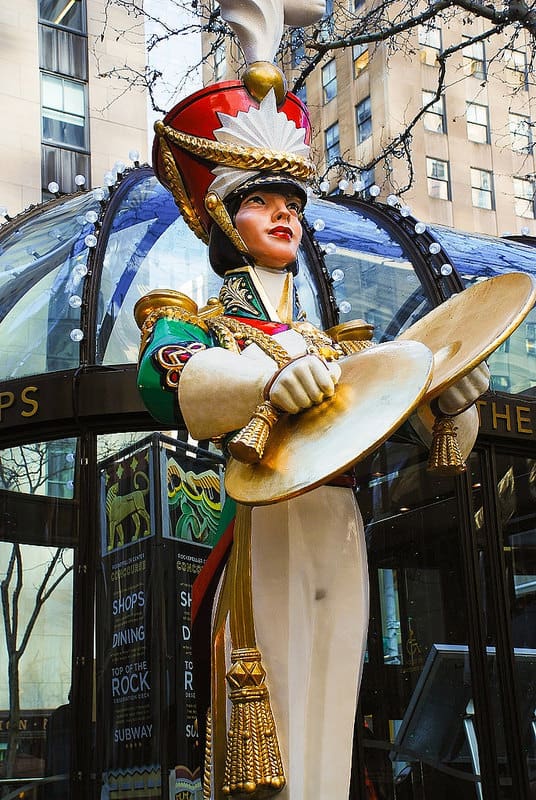 Manhattan during the day in December

Finally, no December visit to NYC is complete without watching a holiday Broadway show. Get yourselves tickets to shows, such as the Phantom of the Opera, Big Apple Circus, or How the Grinch Stole Christmas, among many others!

This post was originally published in December 2014. It was updated and republished in October 2019.