The spectacular Amalfi coast stretches along the northern coastline of the Salerno Gulf on the Tyrrhenian Sea.    This stunning area is famous for beautiful coastal towns set against steep hills or perched high above the sea.  Discover the 5 best towns to visit on the Amalfi Coast with spectacular views and best photo opportunities. 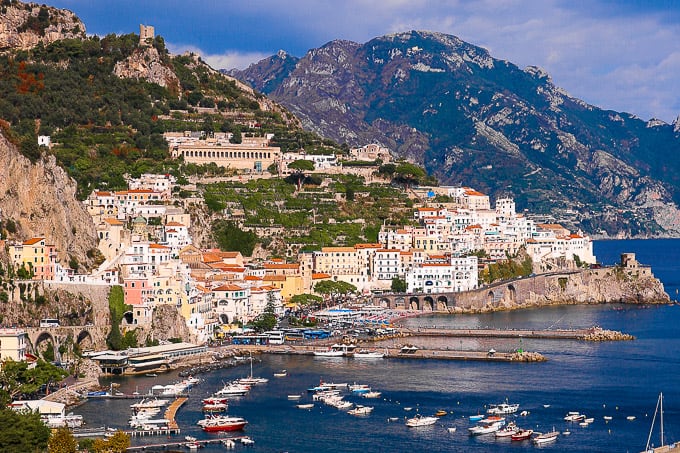 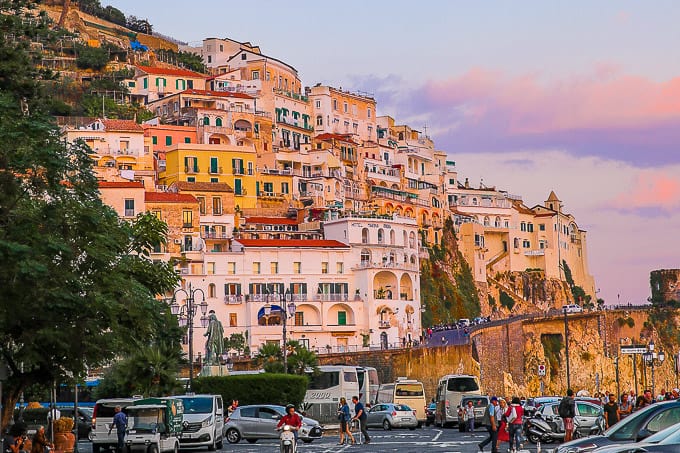 What is the Amalfi Coast?

The Amalfi Coast is located in the province of Salerno, in the Campania region of Italy. It's situated between the Gulf of Naples and the Gulf of Salerno.

How to get to the Amalfi Coast by car?

The only way to reach the Amalfi coast by car is to drive the route of Strada Statale 163 along the coastline between the towns of Positano and Vietri Sul Mare.  The length of the route is about 38 km (24 miles). 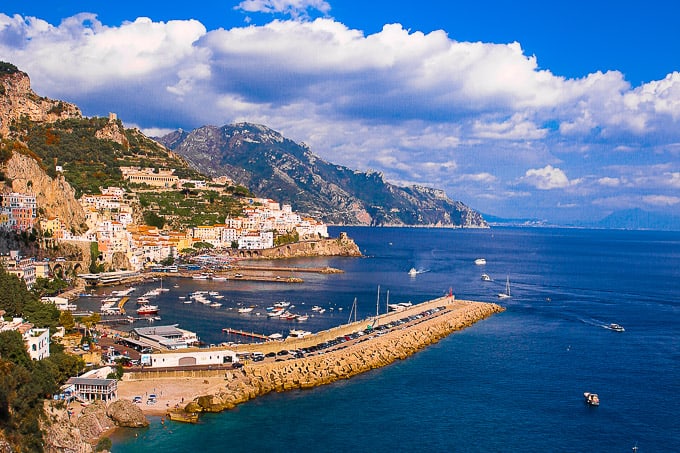 What is the Amalfi Coast famous for?

The Amalfi Coast is famous for its picturesque seaside towns, cliffs, and beaches.   It's known for its stunning coastline and colorful villages with steep and narrow streets.    Many towns along the Amalfi Coast have a rich historical legacy with important sights of historical and artistic value.

Lemons are grown in terraced gardens along the entire Amalfi coast.  As a result, the Amalfi Coast is also famous for its production of limoncello liqueur. 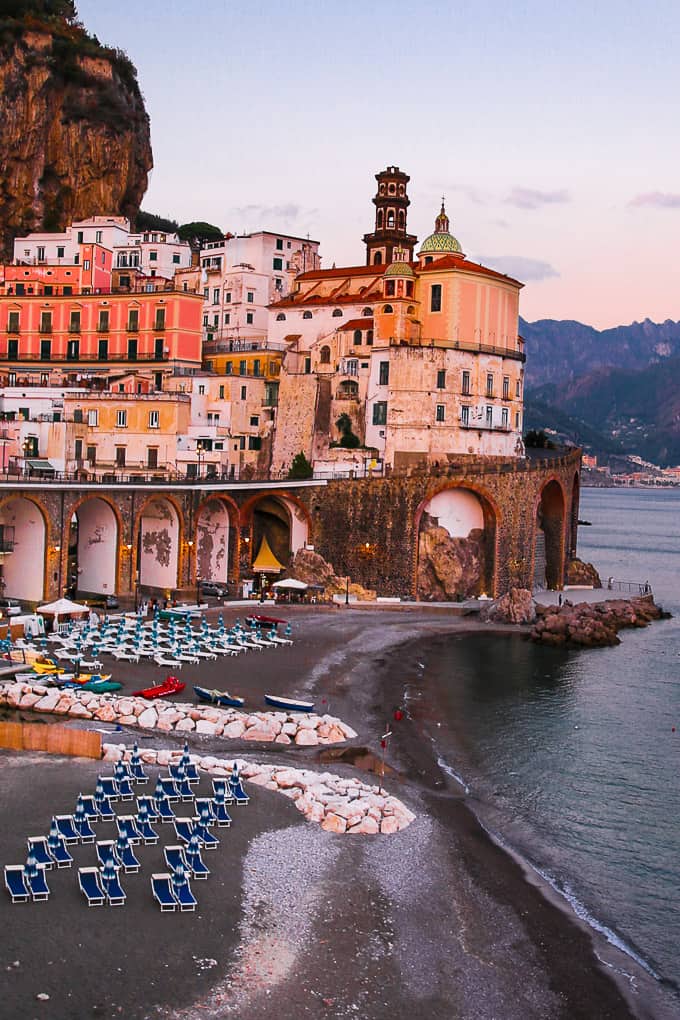 13 Seaside Towns on The Amalfi Coast

Belos is the list of the 13 seaside towns on the Amalfi Coast, from the East to the West.  To reach these towns by car, drive the route of Highway 163 (Strada Statale 163) along the coastline between the towns of Positano and Vietri Sul Mare. 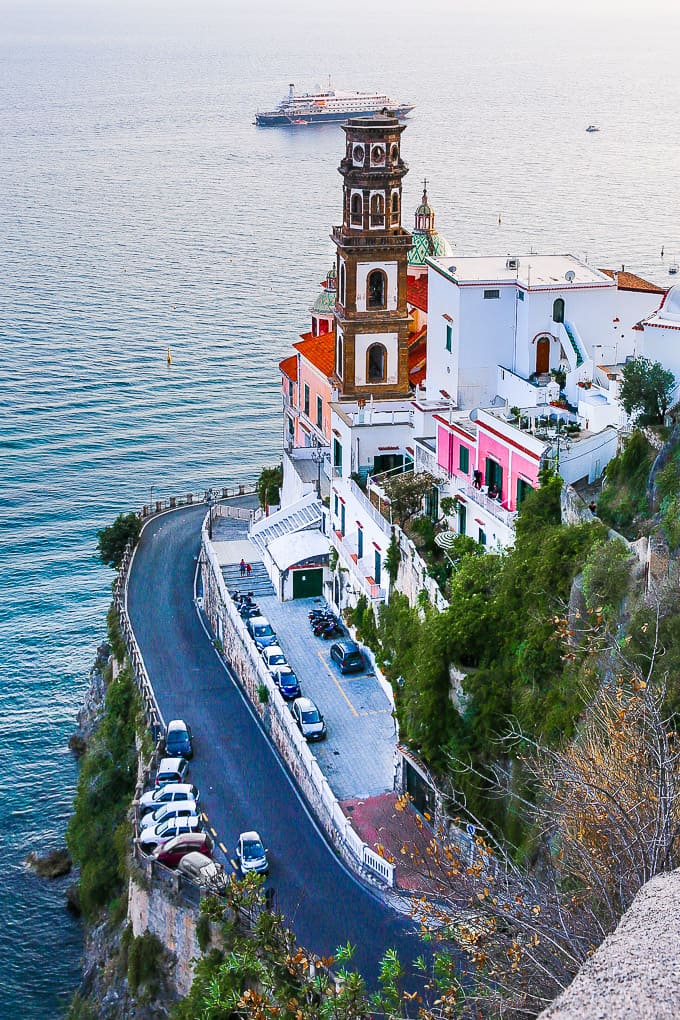 5 Best Towns on the Amalfi Coast

Discover the 5 best towns on the Amalfi Coast that offer the most spectacular views!  All 5 towns below boast breathtaking coastal scenery and offer amazing views of the sea. 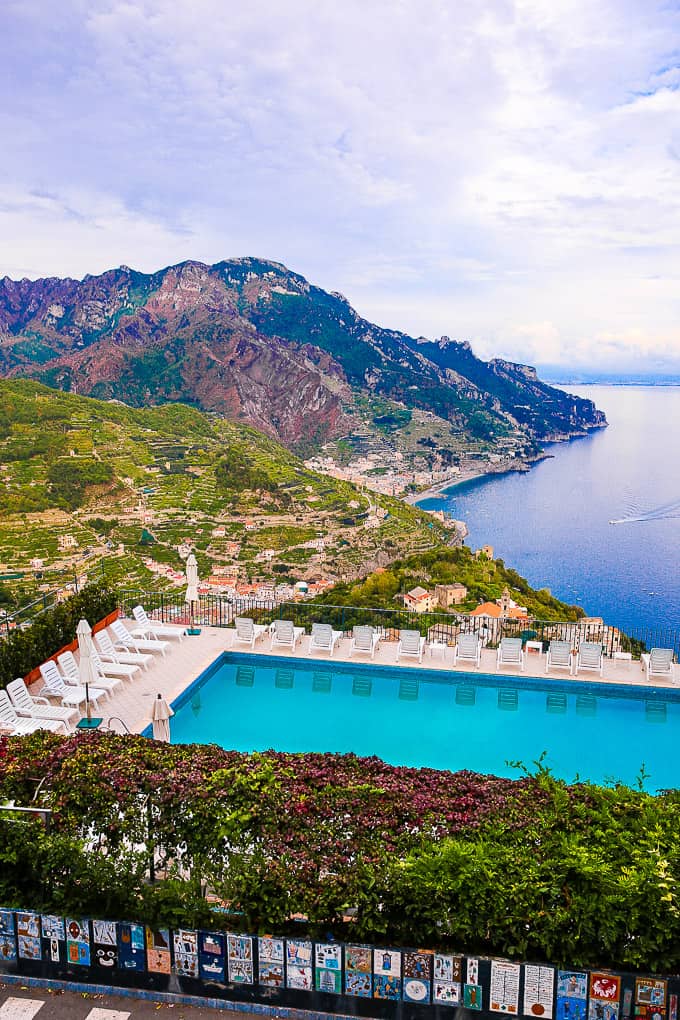 Geographically, the town of Ravello is different from most other towns on the Amalfi Coast because it sits above the coastline offering some of the most breathtaking views!  Ravello's elevation is 365 m (1,198 ft).

Ravello is a much quieter and less crowded place than most other towns in the Amalfi area.   It's famous for its panoramic views, lush vegetation, and spectacular gardens.

Main sights in Ravello include Villa Rufolo, Villa Cimbrone, Cathedral of Ravello, and the Church of San Giovanni del Toro. 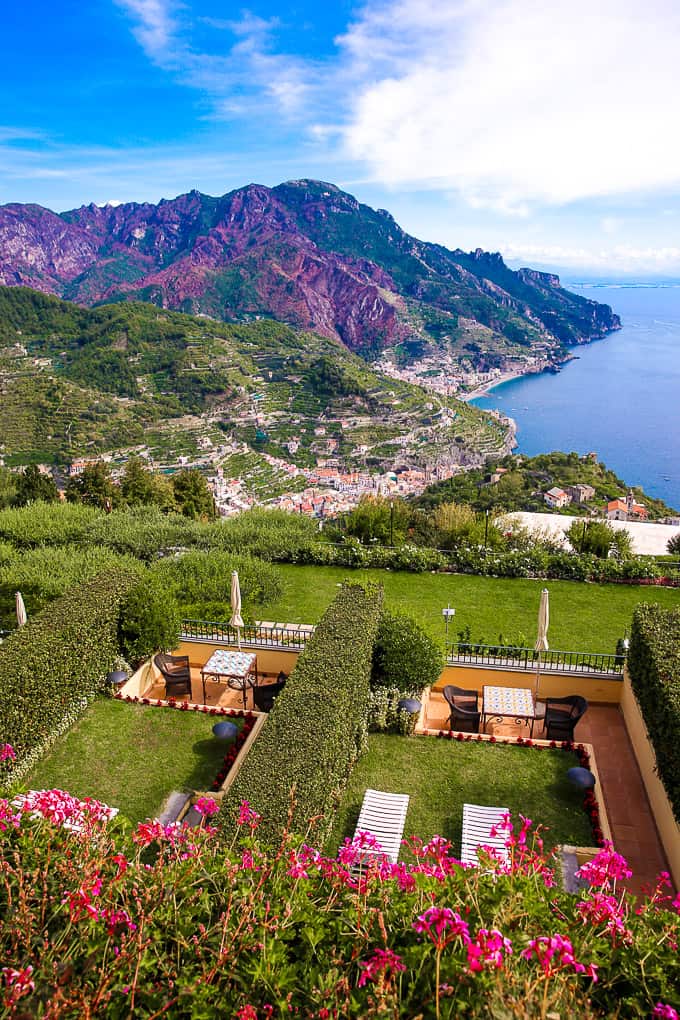 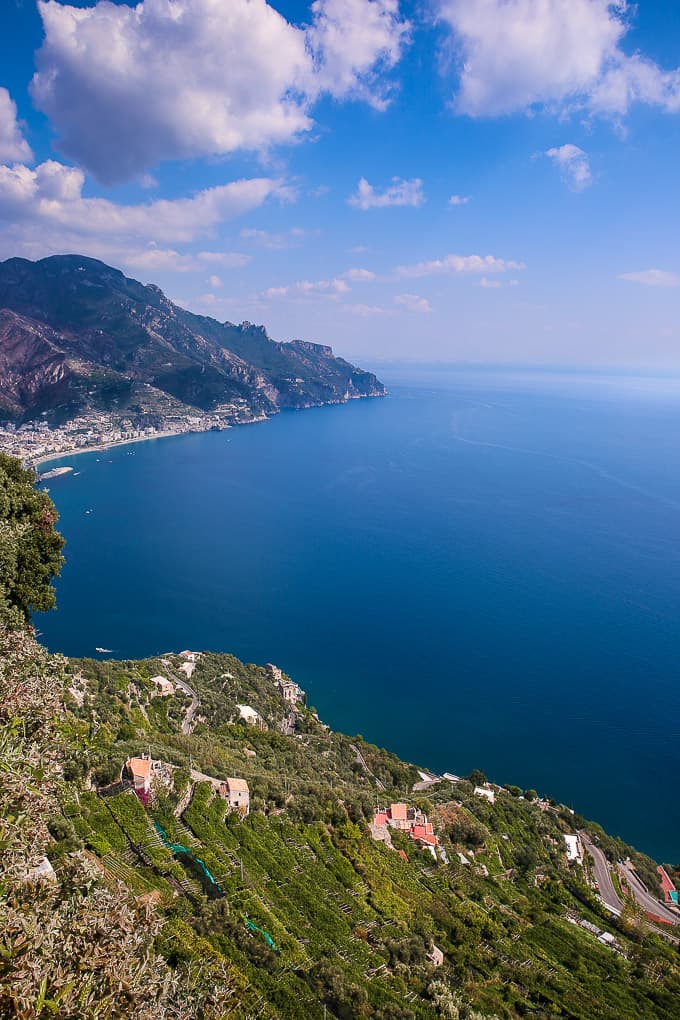 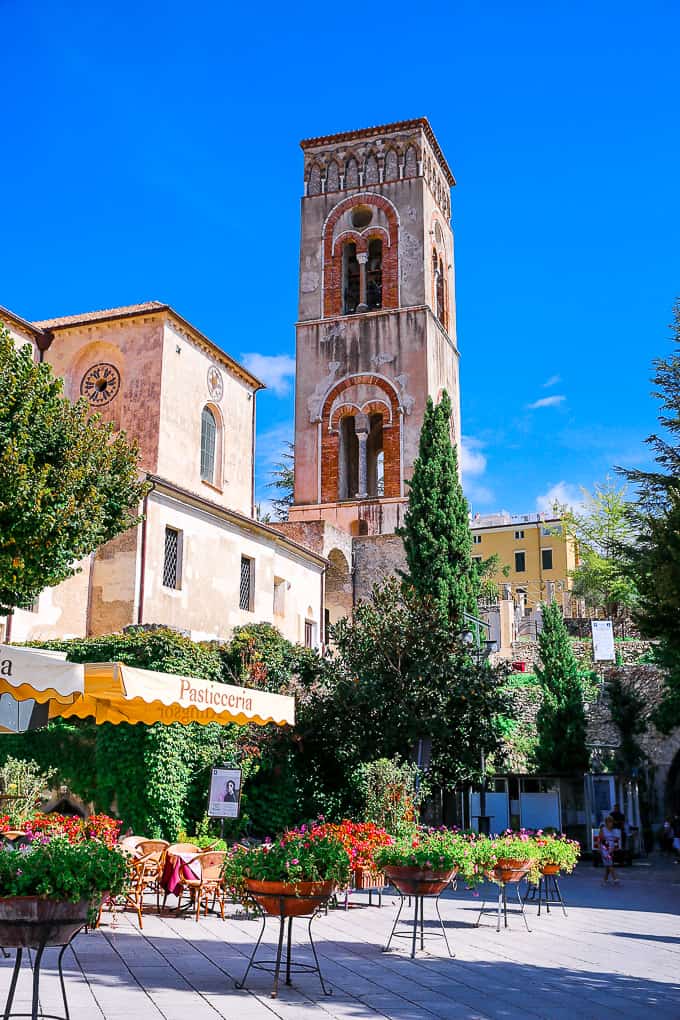 The town of Amalfi is located at the foot of Monte Cerreto, surrounded by steep cliffs and spectacular coastline.  It's designated as one of UNESCO World Heritage Sites.

Main sites include the Cathedral of Sant'Andrea, the Campanile (the bell tower), the Piazza Duomo, Cloister of Paradise (an open-air museum featuring Roman and medieval pillars).

The town of Amalfi is worth the visit because of its spectacular geographical location, beautiful Cathedral, and the town's importance in history. 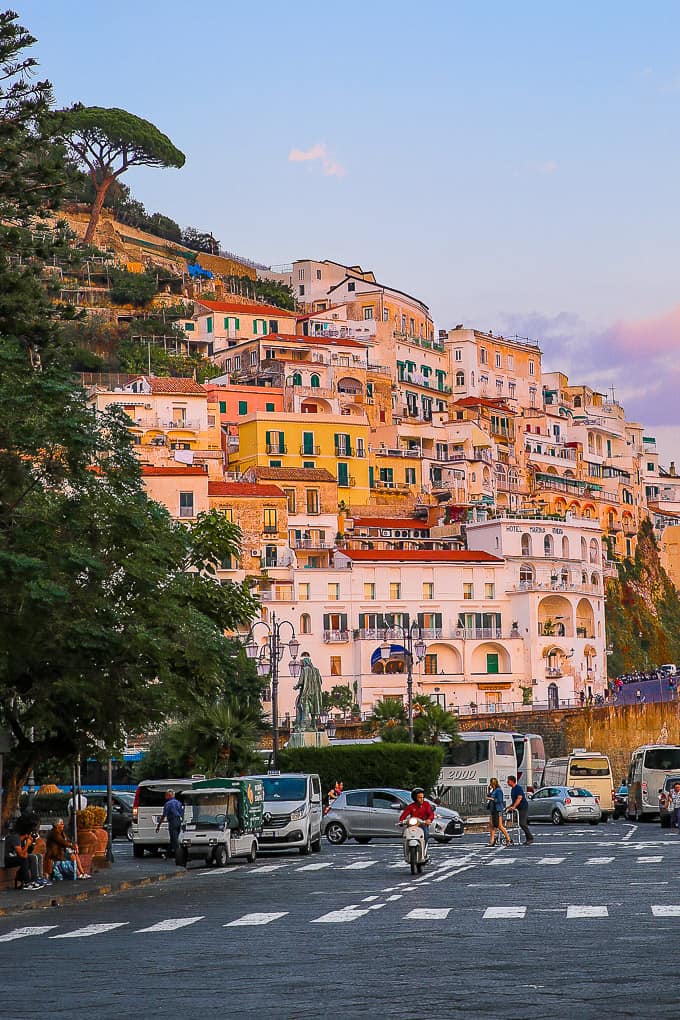 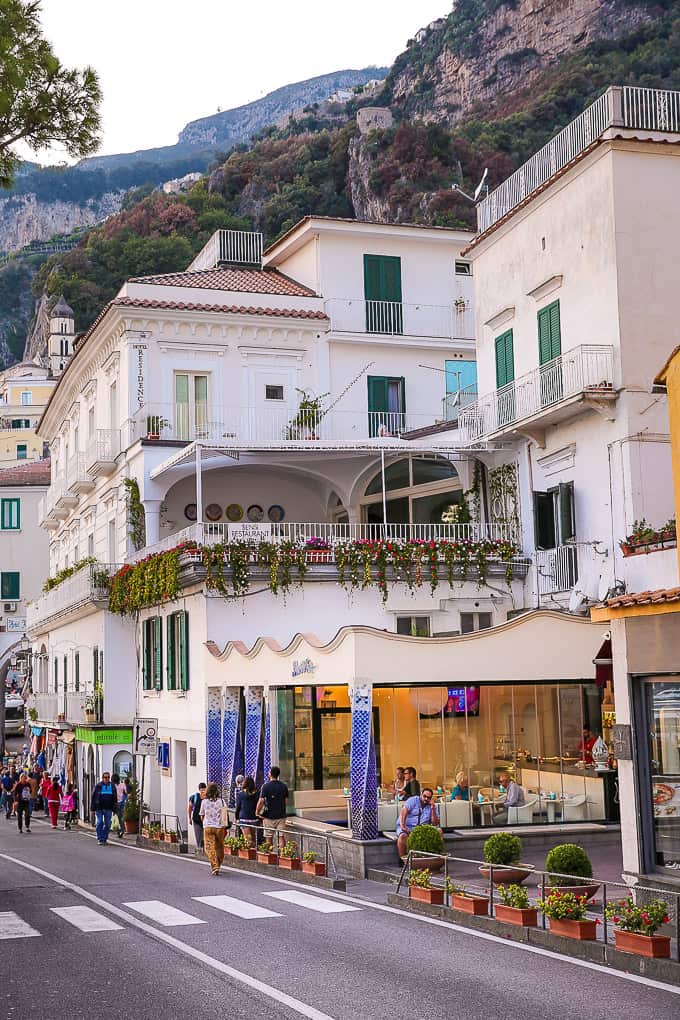 The Cathedral of Sant'Andrea dates back to the 11th century.  The facade of the cathedral features a stunning Byzantine style. 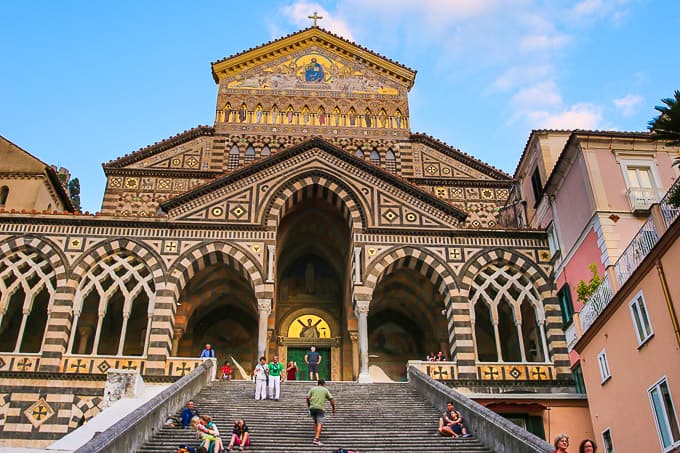 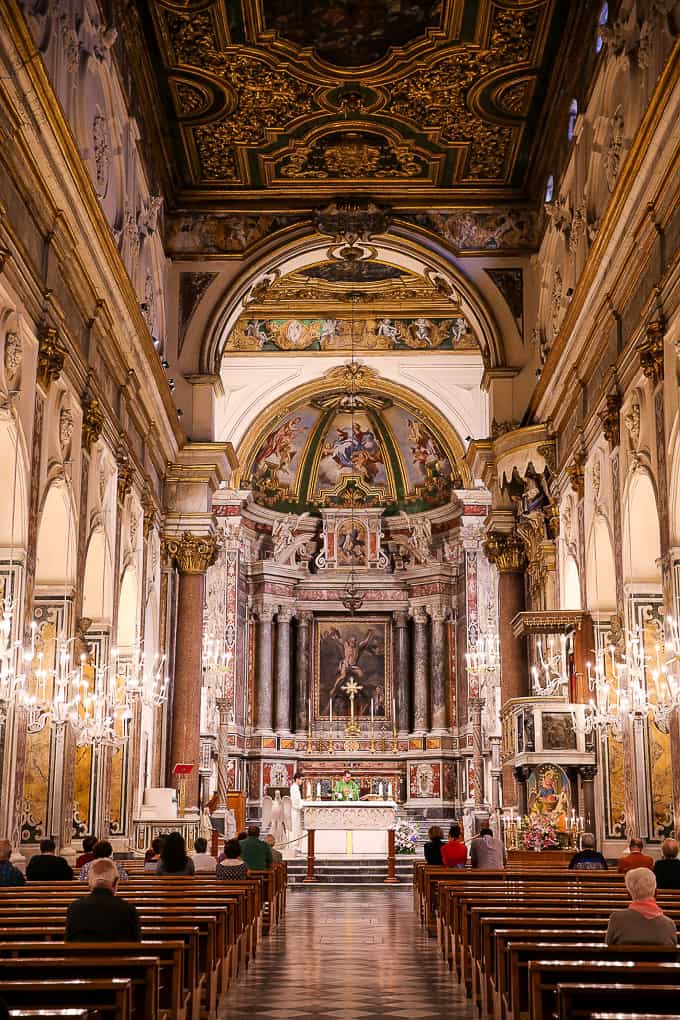 Atrani is a beautiful town on the Amalfi Coast in the Province of Salerno in the Campania Region of Italy.  It is located very close to the town of Amalfi.  You can also take a scenic walking trail from Atrani to Ravello.

If you visit the town of Amalfi, definitely visit Atrani, since the 2 towns are so close to each other. 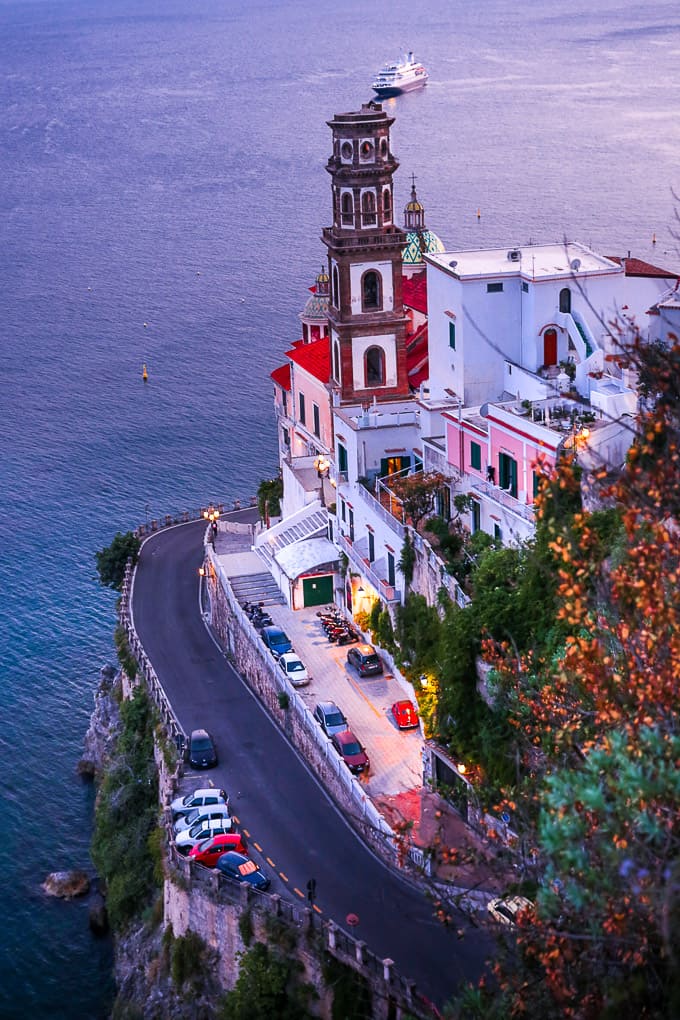 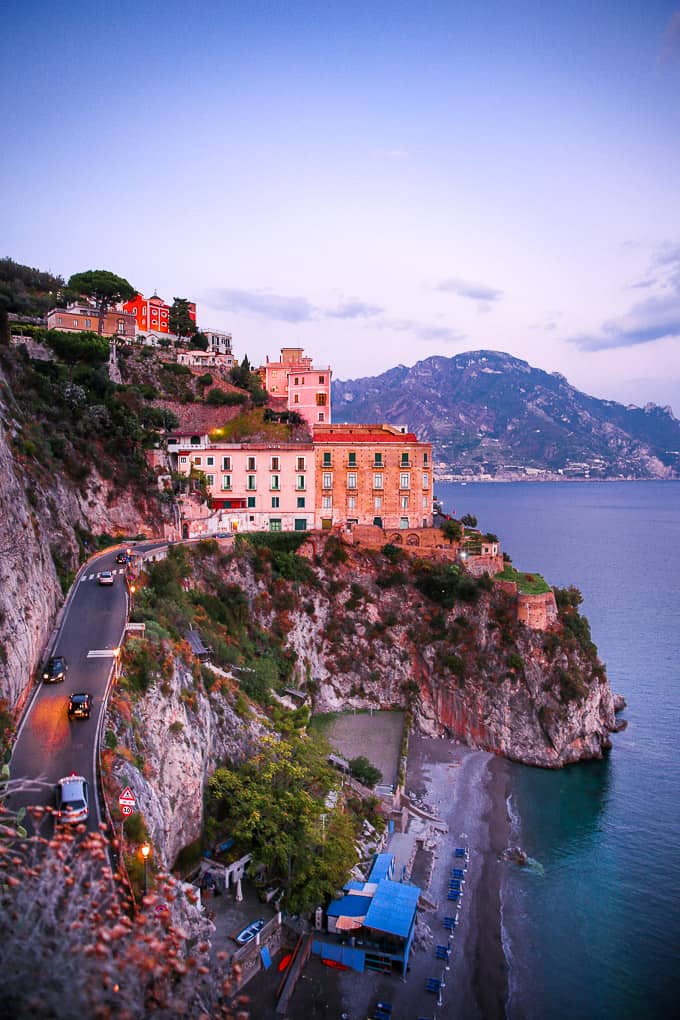 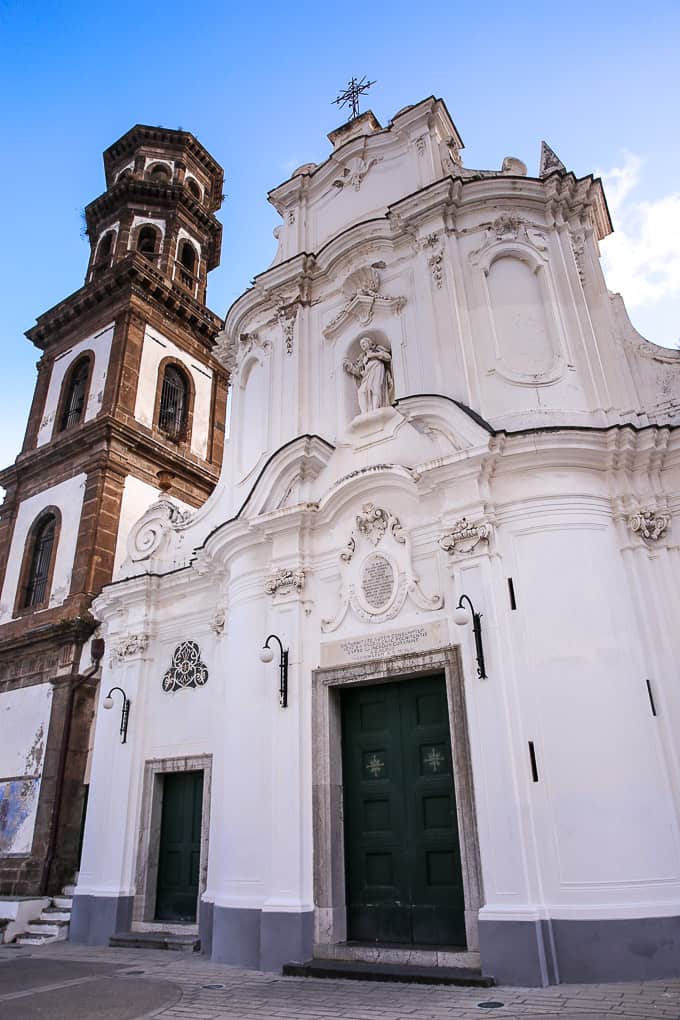 Minori is located on the Amalfi Coast between Maiori and Ravello.  You can take a scenic walking trail from Minori to Ravello.  Minori is included in the UNESCO World Heritage Sites. 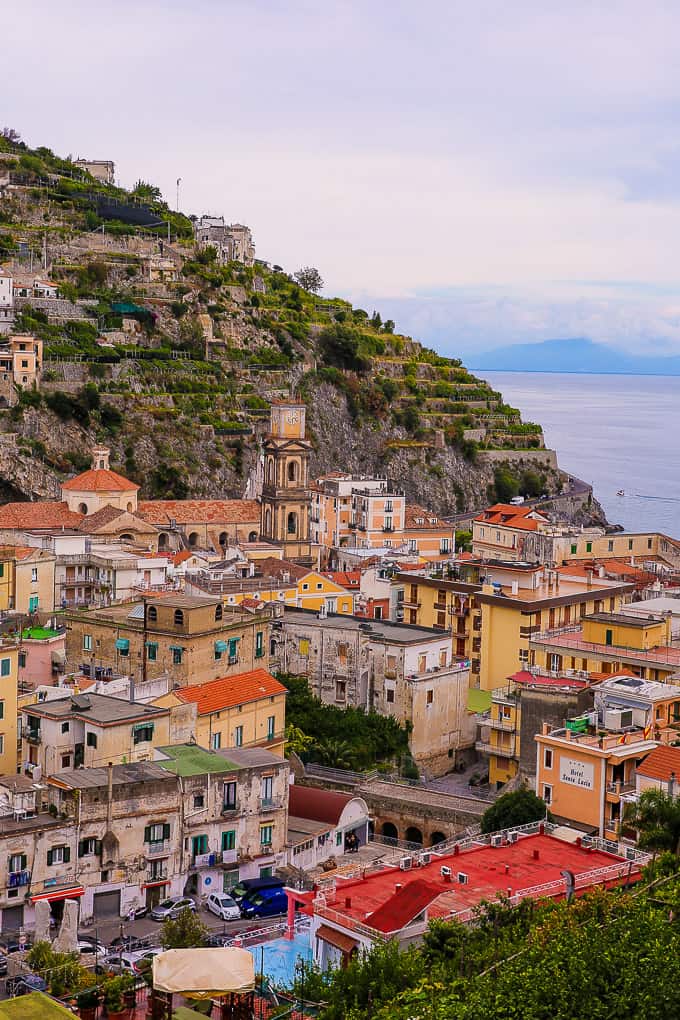 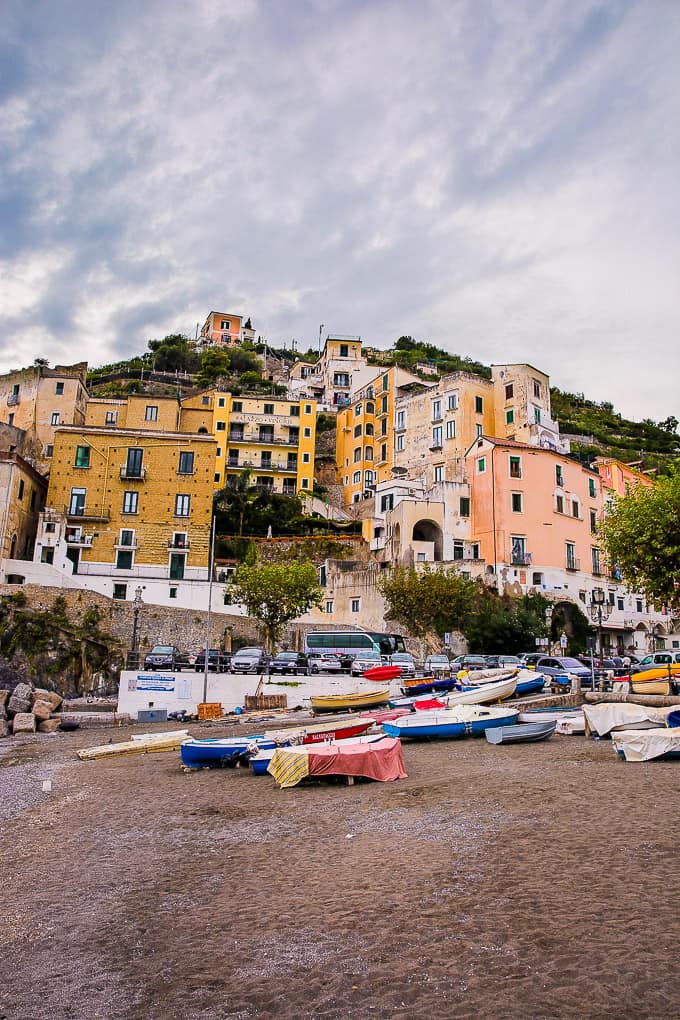 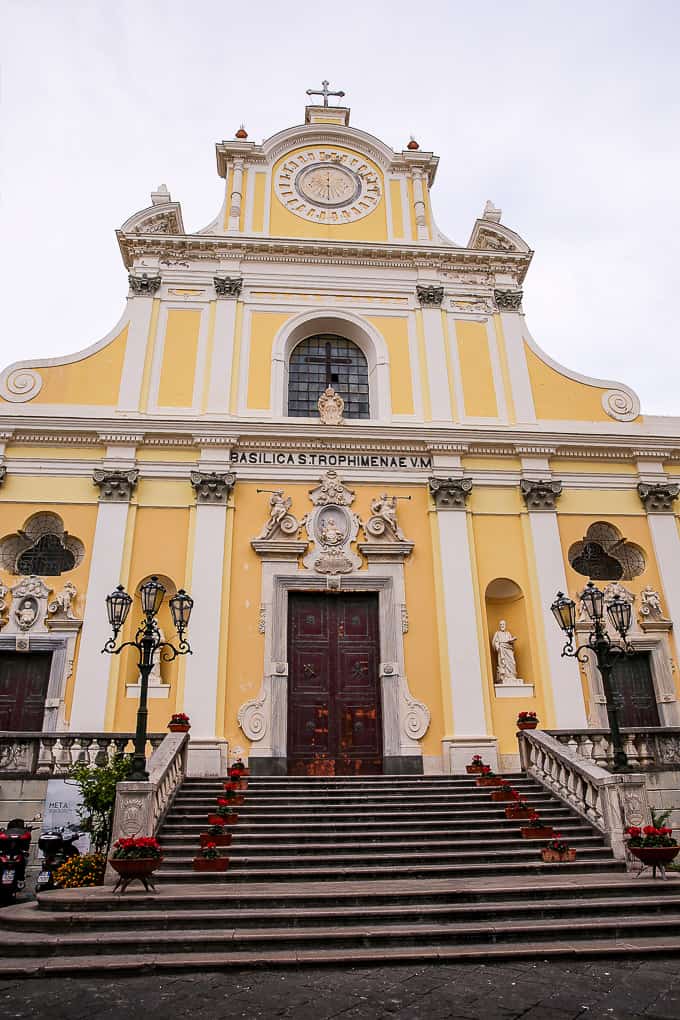 Positano is famous for its pebble beaches and colorful houses nestled on the cliff side of town.   The famous Spiaggia Grande Beach is at the base of the town.  Other popular beaches include Fornillo, Laurito, and Arienzo.  Positano is also famous for its steep and narrow streets.