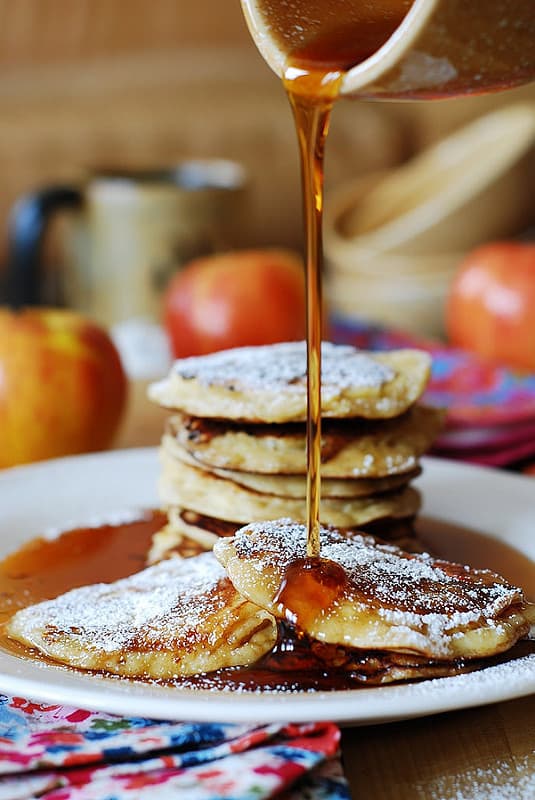 When I saw this recipe for apple cinnamon pancakes in one of the earlier posts on Smitten Kitchen, I immediately knew that I will be including them into my weekend breakfast recipe repertoire. Regular plain pancakes always seem, well, too plain. Pancakes filled with shredded apples? That's my kind of pancake - not too plain! Not to forget about added spices: vanilla and cinnamon. And, for a touch of a wonderful sour taste, these pancakes are made using Greek yogurt instead of milk. 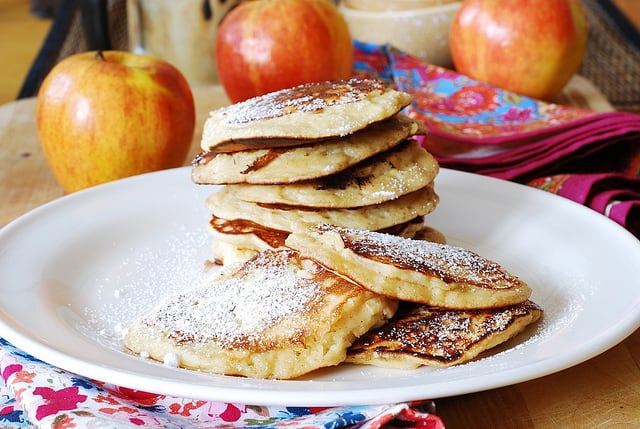 I've made several changes to this breakfast pancake recipe. Deb used milk, and I'm using Greek yogurt because I love the slightly sour taste that pancakes acquire from Greek yogurt. Also, after reading comments on Smitten Kitchen, quite a few readers talked how the pancakes came out too thick, too dense, almost cake-like. I didn't want this kind of density in my pancakes, and realizing that Greek yogurt is quite thick, I adjusted the recipe by adding ½ cup half-and-half (I used half-and-half instead of milk, so that I get the slight buttery taste in my pancakes, too). 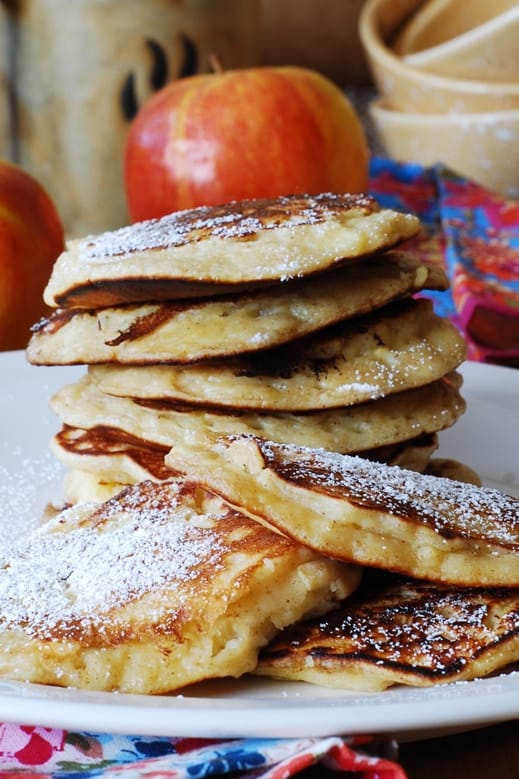 I added cinnamon and vanilla to the batter because the comments and Deb herself said that her pancakes tasted somewhat bland and needed some flavor addition. In comments, people were suggesting to add all sorts of interesting things to the batter: from bacon to calvados liquor. I did not venture that far: in my version of this recipe, my added flavorings were Greek yogurt (adding a nice sour touch), cinnamon, and vanilla. Grated apple inside the pancake perfectly complemented all three of them.

Also, my suggestion with these apple cinnamon yogurt pancakes is to eat them the same day you make them for breakfast as they are the best the first day. They might get a bit soggy the next day because of all the shredded apples inside. 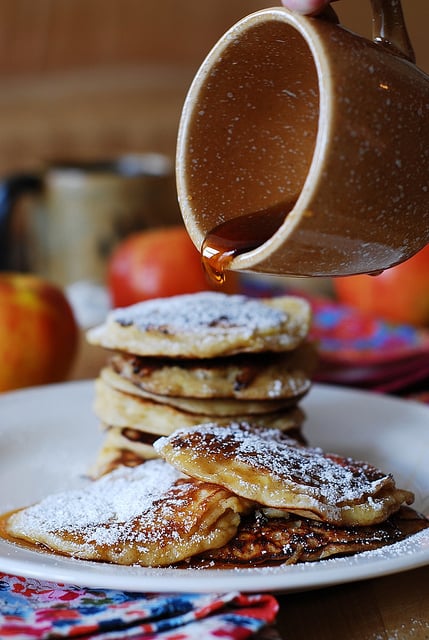 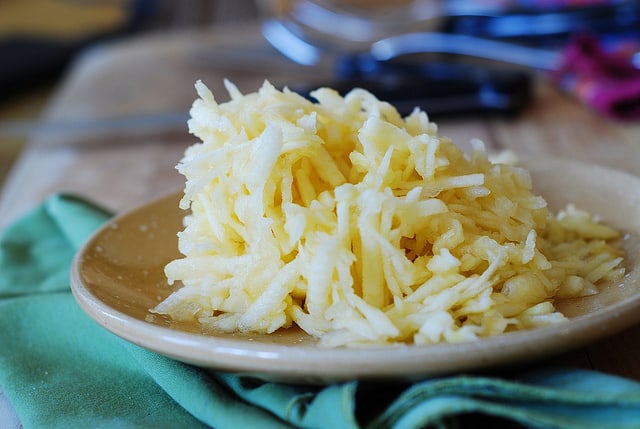 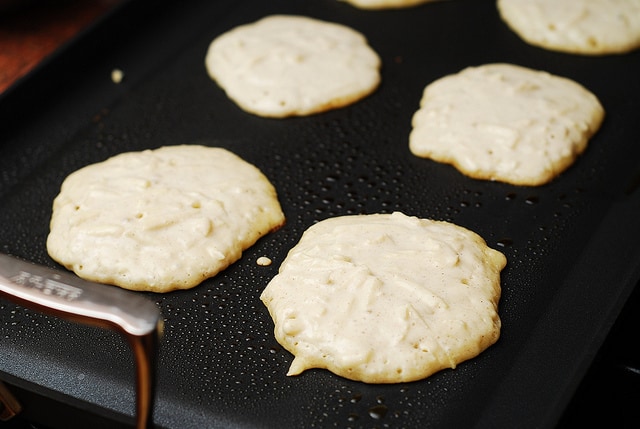 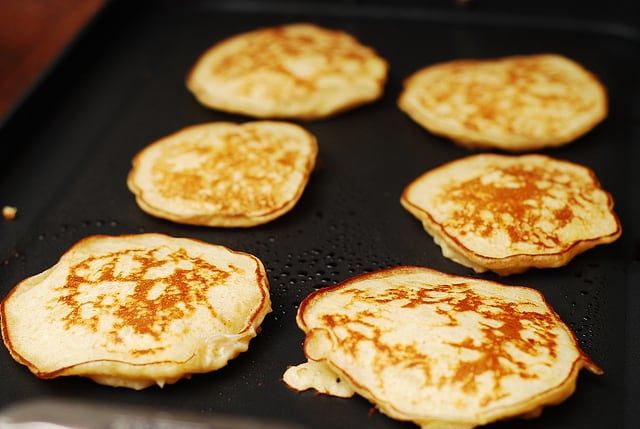 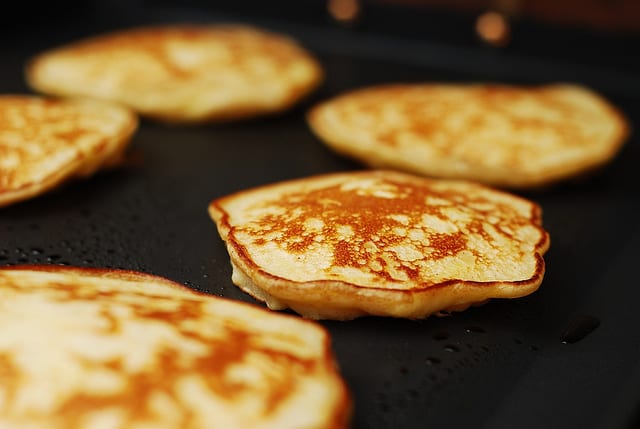 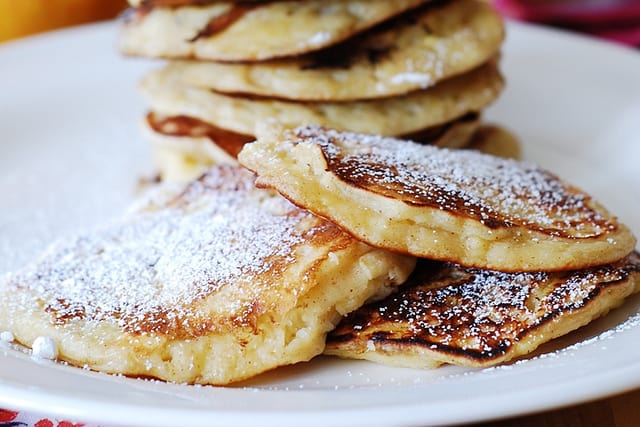 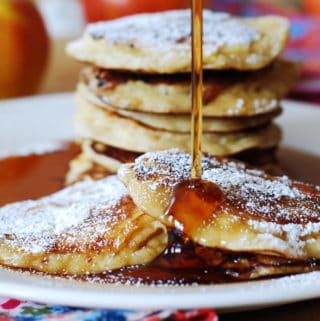 Pancakes filled with shredded apples?  I am in!  Are you? That's my kind of pancake - not too plain!  These Greek yogurt pancakes are stuffed with shredded apples, flavored with vanilla and cinnamon.  They are made using Greek yogurt which brings a touch of a wonderful sour taste.
Print Recipe Pin Recipe
Prep Time 20 mins
Cook Time 20 mins
Total Time 40 mins
Course Breakfast
Cuisine American
Servings 6 people
Calories per serving 163 kcal

The recipe is adapted from Smitten Kitchen.

Tried this recipe?Be sure to leave a comment and provide a Star Rating below - I love your feedback and try to respond to every comment!
« Garlic spicy shrimp and asparagus pasta
Pan-Seared Flank Steak with Chimichurri Sauce »
207.5K shares